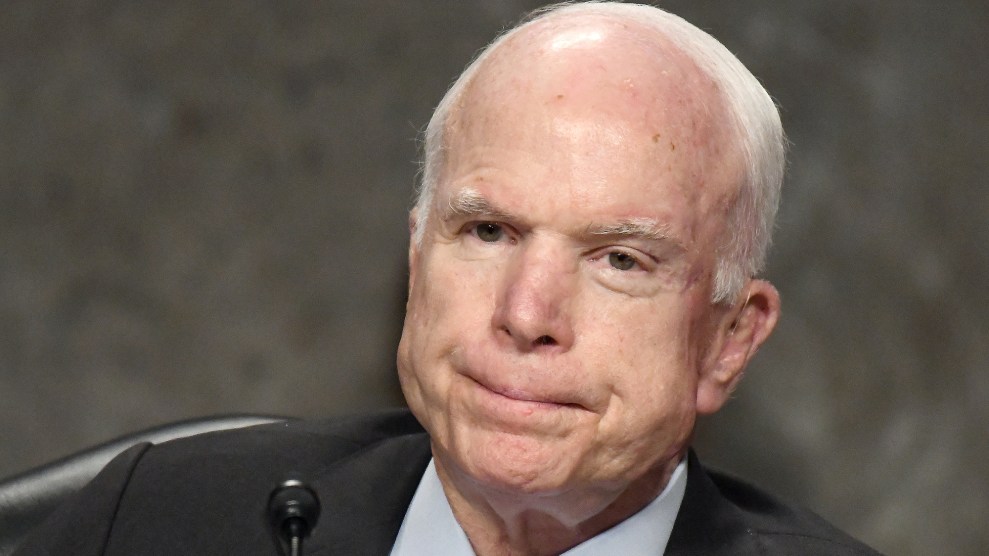 Sen. John McCain (R-Ariz.) announced on Friday afternoon that he would vote against the GOP’s latest bill to repeal Obamacare if it comes up for a vote next week. “I cannot in good conscience vote for the Graham-Cassidy proposal,” he said in a statement.

With McCain’s opposition, it’s unlikely that Republicans have enough votes to pass the last-ditch effort to repeal the Affordable Care Act. The GOP can only lose two Republican senators in a vote. In addition to McCain, Sen. Rand Paul (R-Ky.) has been highly critical of the bill and Sen. Susan Collins (R-Maine) has said that she is leaning toward opposing the legislation.

While McCain provided the final vote to kill the Republicans’ last Obamacare repeal vote in July, his feelings were more in doubt this time around. McCain is famously besties with Sen. Lindsey Graham (R-S.C.), one of the coauthors of the new GOP plan. The two have spent decades acting as though they were auditioning for a buddy comedy film about the Senate. With Graham reportedly pushing McCain to support the new legislation, it was unclear if McCain might change his mind. And just in case, Graham and the bill’s other authors appeared to be trying to correct for some of McCain’s previous complaints about a lack of regular order by scheduling a committee hearing for the new proposal for Monday.

In the end it seems McCain couldn’t be swayed. “As I have repeatedly stressed, health care reform legislation ought to be the product of regular order in the Senate,” McCain’s statement opens. He said that he wasn’t necessarily opposed to the content of the bill, but only if that was considered in a more deliberate manner—not just because of a looming deadline—and that he wants legislation crafted by working with Democrats.

So despite those close personal bonds, it turns out trying to deprive over 20 million people from health insurance can cause problems even in the strongest of relationships. Like many of us, though, the Trump-era has tested friendships and McCain noted the personal element to his decision. “I take no pleasure in announcing my opposition,” the statement says. “Far from it. The bill’s authors are my dear friends, and I think the world of them. I know they are acting consistently with their beliefs and sense of what is best for the country. So am I.”