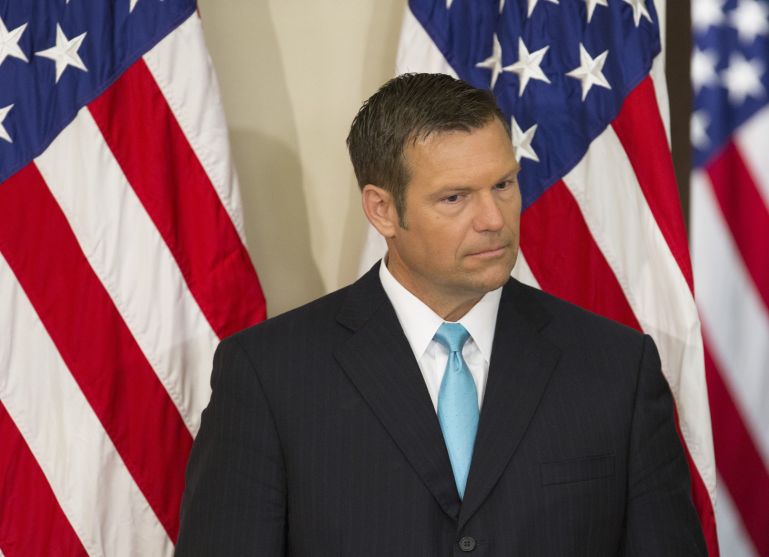 Kris Kobach at a meeting of the Presidential Advisory Commission on Election Integrity. (Rex Features via AP Images)

Kobach’s claim was quickly debunked: it’s legal to vote with an out-of-state driver’s license in New Hampshire and college students who were wrongly accused of fraud came forward to say they’d voted legitimately in the state.

However, at Tuesday’s meeting of the commission in New Hampshire, Kobach doubled-down on his falsehood. He said people were “flooding across borders” to vote in New Hampshire from other states, and the 5,300 people who used out of state licenses were likely non-residents. “We will never know the legitimacy of the election” in New Hampshire, he concluded.

That prompted a rebuke from New Hampshire Secretary of State Bill Gardner, who hosted the meeting held in Manchester. “The result, as we have recorded it, is real—it is real and valid,” Gardner said, to cheers from the crowd. Though a Democrat, Gardner often sides with Republicans on ballot access issues. He told Kobach “it’s not right to come to conclusions” based on those numbers, and “those facts don’t create proof.”

“You have a right to vote; driving is a privilege,” Dunlap said. “Making the equation that failing to update your driver’s license is proof of voter fraud would be almost as absurd as saying that if you have cash in your wallet, it’s proof that you robbed a bank.”

Despite the lack of evidence that people are voting illegally, Republicans in New Hampshire  recently passed a law, praised by Kobach, that tightens the state’s residency requirements. On Tuesday, a state court blocked a provision of the law imposing stiff penalties—including fines of $5,000 and a year in jail—for those who do not show proof of residency when they register on Election Day. “The Court cannot find that these restrictions are ‘narrowly drawn’ by any stretch of the imagination,” wrote Superior Court Judge Charles Temple. “To the Court, these provisions of SB 3 act as a very serious deterrent on the right to vote, and if there is indeed a ‘compelling’ need for them, the Court has yet to see it.”

Kobach’s comments at Tuesday’s hearing seemed designed to attack same-day registration in New Hampshire, which has been shown to increase voter turnout in states by up to 10 percent. Other witnesses at the meeting attacked laws like the National Voter Registration Act, suggesting that making registration more difficult is a prime goal of the commission.