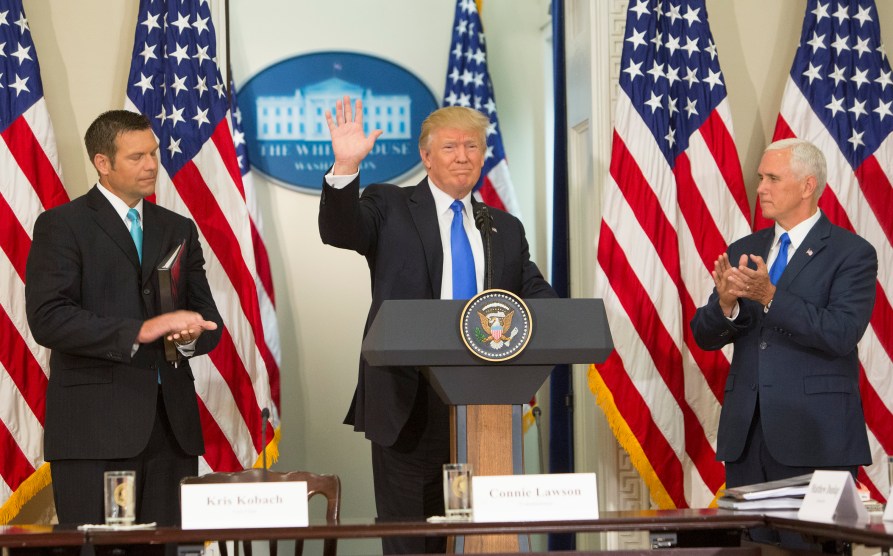 Donald J. Trump speaks at the first meeting of the Presidential Advisory Commission on Election Integrity on July 19. Chris Kleponis/AP

A few days before President Donald Trump’s “election integrity” commission meets in New Hampshire on Tuesday, its vice chair, Kris Kobach, published a column in Breitbart claiming “proof” that voter fraud in the state had tipped the election against Donald Trump and Republican Senate candidate Kelly Ayotte. Kobach cited numbers released by the state’s Republican House speaker showing that 6,540 people voted in New Hampshire on Election Day using out-of-state driver’s licenses as ID. “It seems that they never were bona fide residents of the State,” Kobach concluded. (This claim echoed one made in February by Trump, who told senators, with no evidence, that “thousands” were “brought in on buses” from Massachusetts to “illegally” vote in New Hampshire.)

But there’s a far simpler and less nefarious explanation for what happened: It’s legal to use an out-of-state driver’s license as ID at the polls in New Hampshire. The people who did so didn’t drive in New Hampshire or own a car there or plan to reside permanently in the state. College students quickly came forward to say they’d voted legitimately using out-of-state licenses. (The places where out-of-state licenses were used most frequently were all college towns.) The fraud Kobach cited was nothing of the sort.

In one hour, I found four legit NH voters whom Kobach accused of being fraudulent. https://t.co/lx96GnZGNA

As the commission meets Tuesday for the second time to discuss potential changes to the way Americans vote, its members have been busy promoting falsehoods like these, exacerbating concerns that they’ll use any pretense to restrict access to the ballot under the guise of eliminating voter fraud. The witness list for the meeting—100 percent white men—includes people who have floated radical ideas like requiring background checks for voting.

Since the commission first met on July 19, its members and their work have been mired in controversy. Here’s what’s happened since then:

Yet the commission is moving forward, and on Tuesday it will welcome a controversial pack of witnesses that includes tarnished academics and political allies of Kobach. Civil rights advocates have also condemned the fact that no people of color or women will be participating.

Every single speaker lined up for next week's #ShamVotingCommission meeting in NH is a white male. This Commission is a stain on democracy. pic.twitter.com/jybssvyI4q

One of the most controversial witnesses is John Lott Jr., whose 1998 book, More Guns, Less Crime, became the bible of the gun lobby. But fellow scholars found that his eponymous conclusion was based on erroneous calculations. In response to his critics, Lott has taken extreme measures to defend his work, even posing as a former student in online forums to attack critics. “In most circles, this goes down as fraud,” the editor-in-chief of Science magazine wrote at the time.

Lott left academia and now leads his own pro-gun group, the Crime Prevention Research Center, which he runs out of his Pennsylvania home. David Hemenway, the director of the Harvard Injury Control Research Center, which studies violence from a public health perspective, has said that “virtually all of Lott’s analyses are faulty; his findings are not ‘facts’ but are erroneous.”

Given his focus on guns, Lott is a curious witness at an election commission hearing, where he will participate in a panel on “Historical Election Turnout Statistics and the Effects of Election Integrity Issues on Voter Confidence.” But Lott has dabbled in election turnout research, arguing that voter ID laws lead to higher turnout. (Most other studies show the opposite.) Election expert Michael McDonald of the University of Florida called a 2006 study on voter fraud by Lott “awful” and tweeted, “I don’t trust any of the findings in the paper (which isn’t peer-reviewed and would never be published in reputable place).”

At Tuesday’s meeting, Lott will present a new way to apply his gun work to voting. According to the presentation he plans to give, which was posted online by the White House on Monday, Lott will suggest that people hoping to cast a ballot go through the same federal background check that gun purchasers do—a process that screens people for criminal backgrounds, dishonorably military discharges, and a history of mental health issues or substance abuse.

McDonald says he was approached about being a witness, though an offer never materialized. But his account of his discussion with New Hampshire Secretary of State Bill Gardner, who’s hosting the meeting, suggests that witnesses were vetted to make sure they didn’t contradict the views of the panel’s leaders. “I had conversation with NH SoS Gardner about me participating on a panel,” McDonald tweeted. “He wanted me to say voter turnout is solely voters’ choice. I said is an important factor, but there are other factors, like election laws.” Gardner is a Democrat, but his views on voting align more closely with the Republican Party, and he has repeatedly backed GOP bills that make it harder to vote in New Hampshire, particularly for college students in his state. Another panelist, political scientist Andrew Smith, says Gardner asked him to assess the impact of lowering the voting age to 18, as codified in 1971 through the 26th Amendment to the Constitution.

Other panelists are close ideological allies of Kobach. Hans von Spakovsky of the Heritage Foundation, who is speaking on a panel about “Current Election Integrity Issues Affecting Public Confidence,” has led the charge for strict voter ID laws for more than a decade. He served as a top attorney in the Justice Department’s Civil Rights Division in the George W. Bush administration and was described by former colleagues there as the the “point person for undermining the Civil Rights Division’s mandate to protect voting rights.”

Another speaker on the same panel, Robert Popper, worked with von Spakovsky in the Civil Rights Division’s Voting Section. As an attorney at the conservative watchdog group Judicial Watch, Popper has recently taken steps to force states to purge their voter rolls—following the work of commission member J. Christian Adams, who for years has pursued legal cases to compel states and counties to remove voters from their rolls. The public’s faith in election systems will be restored, Popper told Mother Jones earlier this year, “when there are election integrity laws and they are enforced.”

Not every member of the commission is on board with Kobach’s agenda. “It is my sincere hope and prayer,” commissioner Alan King, a Democratic probate judge in Alabama, wrote in a statement last week, “that this Commission will focus on the real election issues facing the United States of America, including alleged ‘hacking’ by the Russians, instead of spending precious time focusing on non-issues to deprive American citizens from voting.”