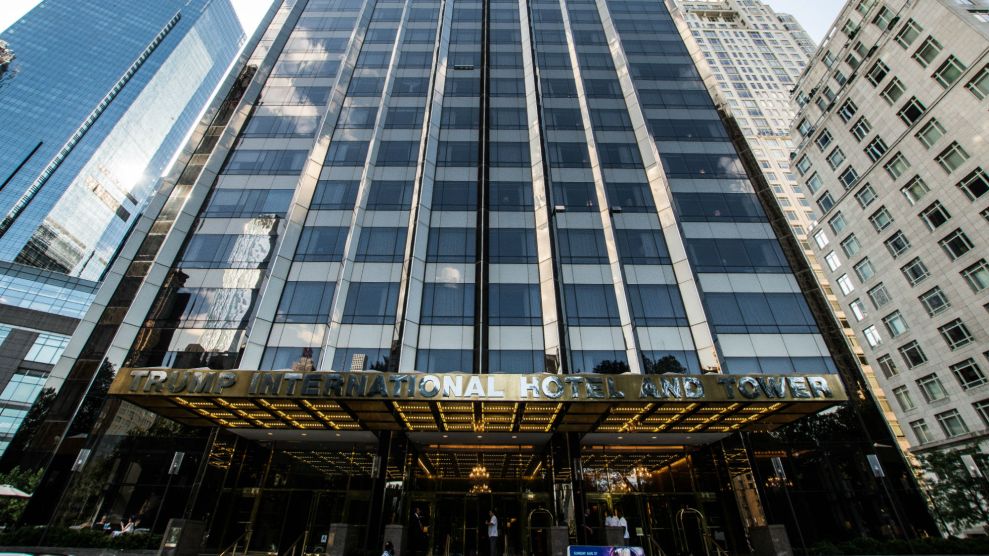 This story originally appeared on ProPublica and was co-published with Forbes.

Earlier this summer, the Trump Organization announced big plans to open a line of hotels across the country. The new brand, American IDEA, would be modestly priced and patriotically themed. “The product is very hometown and fits in every hometown in the United States,” Trump Hotels CEO Eric Danziger said during a presentation at Trump Tower in Manhattan, the same place where Donald Trump had announced his presidential campaign two years earlier.

American IDEA would be part of a wider rollout with another higher-end hotel line, Scion, that the Trumps had already unveiled. Progress on the hotels would be swift, Danziger said.

The Trump Organization had said it signed deals for Scion hotels in Nashville, Dallas, Cincinnati, Austin and New York. At various times, company officials have cited anywhere from 10 to 39 impending deals.

The Trumps declined to release any details about the deals. The Trump Organization wouldn’t name the developers partnering with it, or where the planned hotels would be. So we asked readers and journalists to help us figure out who the president’s company was working with and where.

What we’ve found are false starts, fizzled-out partnerships and, for a number of cities that the Trumps said they had deals in, no evidence of deals at all.

Nashville faced petitions after the Trump Organization said it was coming to town. But development and tourism officials we spoke to said they were unaware of any Trump hotel being planned. Bobby Bowers, senior vice president of operations for Hendersonville, Tennessee-based hotel industry research firm STR, said his company has no information about a Trump hotel partnership in Nashville, even among its “unconfirmed” listings. A spokesperson for the city’s convention and visitors bureau said the same thing.

Chawla, along with his business partner and brother Dinesh, reached an agreement with the Trump Organization on a $20 million Scion hotel and three other franchise agreements to convert existing hotels to the American IDEA brand.

In Dallas, a developer who had been working with the Trumps had declared the deal dead two months before the Trump Organization identified the city as a hotel site. (He also had plans for a Trump hotel in downtown St. Louis before political pressure and protests derailed it.)

The developer, Mukemmel “Mike” Sarimsakci, did not respond to a request for comment. If the plan is back on with Sarimsakci or a different partner in Dallas, city officials don’t appear to know about it. Requests for correspondence between the city and representatives of the Trump Organization, as well as requests submitted to Dallas’ Office of Economic Development, turned up no records.

Officials and hotel developers in Cincinnati also said they had not heard of any deals involving Trump.

And in Austin, the deal “died before Trump was elected,” the head of a firm that had been working on the project told the Austin Business Journal. “It’s absolutely 100 percent dead.”

Danziger declined to comment for this story. Other representatives for the Trump Organization’s hotel business did not respond to requests for comment.

As we previously detailed, the Trumps are moving forward on four hotels in the Mississippi Delta. The deals are in partnership with a pair of Indian-American hoteliers, one of whom had met Donald Trump on the campaign trail and later gave money to his presidential campaign.

Suresh Chawla met Trump at a private fundraiser in August 2016 and donated $50,000, split between Trump’s campaign and the Republican National Committee. Months later, Chawla, along with his business partner and brother Dinesh, reached an agreement with the Trump Organization on a $20 million Scion hotel and three other franchise agreements to convert existing hotels to the American IDEA brand.

We also found a few other cities where the Trumps have had early conversations about partnering with local developers.

Len Blackwell, an attorney in Gulfport, Mississippi, said he had heard rumors of the Trumps “poking around” on the coast.

Jon Willis, a politically active developer in Mesa, Arizona, said he met Donald Trump Jr. through a mutual connection at Turning Point USA, a conservative PAC, and started working on the Trump campaign last year. When Willis spent time with Donald Jr. at a campaign event in Arizona last year, he said they discussed expansion plans that the Trump Organization had in Las Vegas, where it has a condo-hotel tower in partnership with billionaire Phil Ruffin. “That was the extent of what we talked about,” Willis said, adding that the two “mostly just talked about our kids.”

Willis added that while he wasn’t working with the Trumps on their new hotel line, he would be more than open to it: “I’d love to be involved.”

Three other established hoteliers and financiers in the South told us they’d also welcome working with the Trumps. The Trump Organization has said it is meeting with potential partners in Mississippi.

Len Blackwell, an attorney in Gulfport, Mississippi, said he had heard rumors of the Trumps “poking around” on the coast. (The Trump Organization has said it is meeting with potential partners in Mississippi.)

Blackwell has had experience working with the Trumps. He represented Trump in a planned $80 million casino and hotel project in Gulfport in the mid-1990s. Trump abandoned the deal before ground was broken.

One issue, according to Blackwell, was that Trump’s representatives were reticent about following through on a required $250,000 deposit they had negotiated with the city.

“My experience with the Trump Organization and its attempt to put a casino in Gulfport was: Its representatives, including Mr. Trump, came to town and had a lot of public relations activity, and did in fact work toward a project but, when it came down to it, chose not to go forward,” he said.

Want to help ProPublica dig into this project? Sign up. Have any more ideas on how to help them find these Trump Organization deals? Send an email at trumphotels@propublica.org.