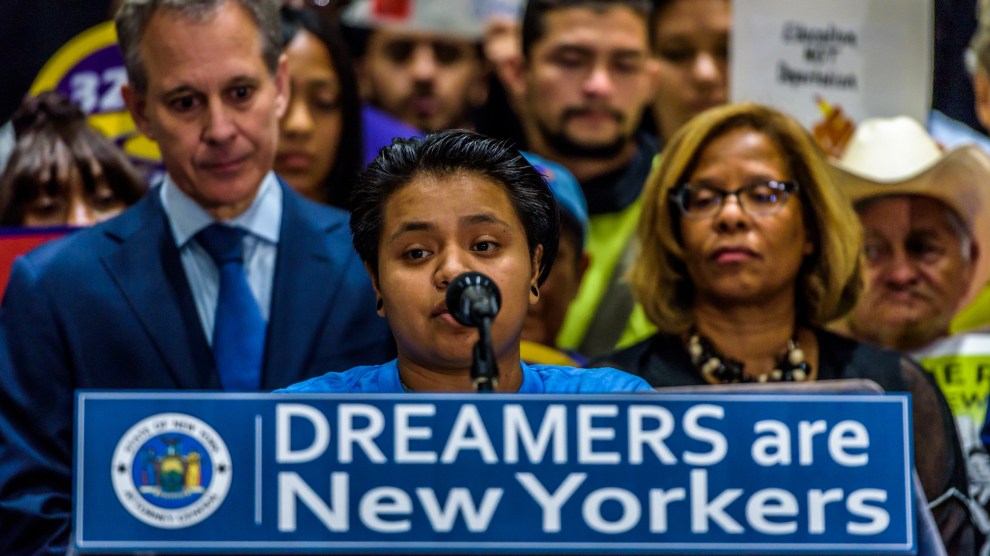 The 15 minutes Zuleima Dominguez spent waiting in the John F. Kennedy International Airport immigration office felt eternal. Although she had received permission from the federal government to study abroad in Spain, she didn’t have a US passport and wasn’t sure she’d be let back into the United States. She broke into a sweat when the immigration officers called her name. But after some questions, they allowed her through.

Before President Barack Obama created Deferred Action for Childhood Arrivals, or DACA, to protect young undocumented immigrants from deportation, Dominguez was stuck in the United States. If she left the country, there was no way to return legally. DACA changed that. Due to a policy known as advance parole, roughly 40,000 DACA recipients like Dominguez have left the United States for the first time as adults.

But as of last Tuesday, when Attorney General Jeff Sessions announced that the administration would end DACA, advance parole no longer exists for DACA recipients, known as Dreamers. President Donald Trump claimed that he was taking “no action” on DACA because permits that expire before March 2018 can still be renewed, and he hopes that Congress will provide a legislative solution before then. But with last week’s announcement, the administration immediately ended advance parole. As a result, nearly 700,000 Dreamers can no longer leave the United States to take classes, work, visit ailing relatives, or attend funerals. (Dreamers who have already been approved for advance parole can still travel, but pending applications are being returned.)

For Dominguez, studying in Oviedo, Spain, was a chance to reflect on her life in the Bronx. Nearly two decades ago, her father left Mexico for the United States, followed soon after by her mother and then seven-year-old Dominguez and her brother. After graduating from high school in 2011, Dominguez planned to go to college immediately. But her grandmother in Mexico fell into a diabetic coma, and her dad had to spend her tuition money on medical care. Dominguez worked at a restaurant and saved money, and by January 2012 she had enough to take one class at a nearby community college.

Five months later, Obama established DACA. “Now, let’s be clear: This is not amnesty, this is not immunity,” Obama said. “This is not a path to citizenship.”

But due to a quirk in US immigration law, an exception emerged. About half of all Dreamers had crossed the border illegally as children, and half had overstayed visas after entering the United States legally, Robert Warren, a demographer at the nonpartisan Center for Migration Studies, told the Washington Post. Unlike those who overstayed visas, Dreamers who crossed the border illegally could not apply for green cards if they married American citizens. Advance parole provided a fix. If a Dreamer left and returned to the United States using advance parole, that legal reentry would supersede the illegal border crossing he or she had made as a child—opening the door to a green card and citizenship through marriage to a US citizen.

Many conservatives were outraged. Hadn’t Obama said DACA wasn’t amnesty? In the Senate, Republican Chuck Grassley of Iowa led the charge against the advance parole “loophole.” In a March 2016 letter to the Department of Homeland Security, Grassley and Sen. Mike Lee (R-Utah) requested data on how many people were getting green cards through advance parole.

Four months later, US Citizenship and Immigration Services (USCIS), the office that administers DACA, responded to Grassley. Out of 22,340 Dreamers who had received advance parole through 2015, fewer than 3,000 had become legal residents. USCIS added that it wasn’t sure how many of those 2,994 Dreamers were already eligible for marriage green cards because they’d initially come to the country on visas. Either way, USCIS wrote that less than half a percent of all DACA recipients had gained legal status through advance parole. Still, Grassley stayed on the case.

Dominguez didn’t study abroad as part of a marriage plot. After getting her associate’s degree and receiving a DACA permit, she transferred to Hunter College in Manhattan, where she is majoring in political science and gender studies. When she wasn’t at Hunter or volunteering with the community group Make the Road New York, Dominguez worked about 50 hours a week on the maintenance crew at a homeless shelter. The job wasn’t easy—she came face to face with domestic abuse and took care of a woman who was close to death after an overdose—but it allowed her to save up $8,000 for the trip to Oviedo. (DACA recipients in most states, including New York, are not eligible for tuition assistance.)

Like many young people abroad for the first time, she got homesick. “Because that’s when it actually clicks that you belong to the United States,” she says. “You start missing certain things about the US,” even if sometimes it’s just the fast food. Other Dreamers have used advance parole to see their families. Monica Camacho-Perez, who like Dominguez came to the United States when she was seven and is now 23, was able to see her grandparents in Mexico for the first time in her 15 years in the United States. After paying the $360 fee to apply for advance parole and providing medical records in Spanish and English showing that her grandmother was ill, along with birth certificates proving they were related, Camacho received permission to visit Mexico. She left on November 9, the day after Trump was elected.

Camacho, who works as a youth organizer for the advocacy group CASA de Maryland, laughs at the idea that the trip was a shortcut to a green card. Marrying a US citizen to get legal status “just sounds weird,” she says. She’d rather fight to pass the DREAM Act, a bipartisan bill that would give her a path to citizenship. Dominguez points out that even if she married a US citizen, getting a green card could take years.

But many DACA recipients who got green cards were already eligible for them because they had come to the United States on a visa. A USCIS spokeswoman told Mother Jones that the majority of the roughly 40,000 Dreamers who got green cards were eligible as a result of advance parole but did not provide any data to back up that claim. The Washington Post reported that unless there was a huge spike after USCIS wrote to Grassley last year, roughly 6,000 DACA recipients have gotten green cards through advance parole.

Then there’s a more basic question: Is it a bad thing that some Dreamers got green cards by marrying US citizens?

Jeremy McKinney, a North Carolina-based immigration lawyer and the secretary of the American Immigration Lawyers Association, has helped many clients with DACA use advance parole to see dying relatives or attend funerals. He knows that advance parole makes it easier for some DACA recipients to get legal status, but he doesn’t see it as a “lawyer trick,” saying, “To me, it’s unnecessarily cruel to take away their travel during this phase-out.”

If nearly 700,000 Dreamers do start losing protections from deportation in six months, the decision to end advance parole will be a footnote to a much harsher history. In September 2018, Dominguez will become eligible for deportation if Congress does not step in. She will also lose her work authorization, and with it her new job at Target. When Dominguez graduates from college in May, there may be little incentive for employers to hire someone with a few months left on her work permit.

Since Trump decided to end DACA last week, Dominguez has had trouble concentrating in class. She thinks about what will happen if immigration officers come to arrest her and she’s not there. Will they take her undocumented parents instead? What would happen to her siblings? “There is nothing positive that you can actually think,” she says. “And even if you try, it’s really hard.”