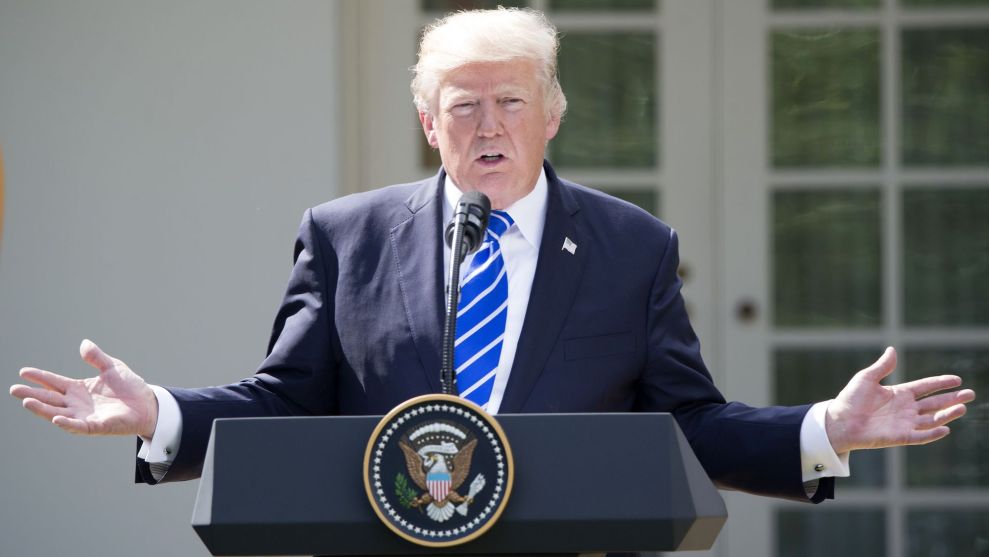 After months of secrets meetings, President Donald Trump and Congressional Republicans are ready to unveil their plan to rewrite America’s tax code. The final product is a massive tax cut for the wealthiest Americans.

If it becomes law, the framework released on Wednesday by the White House would be the biggest tax overhaul since Ronald Reagan was president. The plan would cut corporate taxes from 35 percent to 20 percent, and reduce the top individual rate from 39.6 percent to 35 percent.

At a speech in Indiana Wednesday afternoon, Trump plans to sell the plan as tax relief for hard-working Americans that will pay for itself by unleashing startling economic growth. The numbers do not support those claims. Instead, the plan is likely to further balloon the national debt by cutting taxes for top-earners, whose share of national wealth is approaching levels not seen since the Great Depression.

But it’s easy to see why Republicans are selling it as a middle-class tax cut. A recent ABC News-Washington Post poll found that just 5 percent of Americans think US taxes favor the middle class, compared to 73 percent who believe they favor the wealthy.

Individual tax reform could save Trump tens of millions.

On the individual side, the Republican plan replaces the seven existing tax brackets, which range from 10 percent to 39.6 percent, with three tax brackets: 12, 25, and 35 percent. The standard deduction would also double to $12,000 for individuals and $24,000 for couples, though most of those benefits are offset by eliminating the personal exemption of $4,050. In essence, Trump’s plan would raise taxes on the low-income workers by 2 percent and only offset that with a $1,600 increase in how much individuals can deduct along with unspecified “additional tax relief.” The text of the plan does hedge and say that the administration might add in another bracket for the highest earners, but so far their plan is just to lower the top-rate for the wealthiest Americans.

But the real benefit to millionaires comes from Republicans plan to eliminate the Alternative Minimum Tax (AMT) and the Estate Tax. The AMT was introduced in 1978, and blocks wealthy families from using loopholes to reduce their tax burden to next to nothing. In 2005, the AMT increased Trump’s effective tax rate from 4 percent to 24 percent, a $31 million difference.

That’s paired with a tax cut that would allow rich families to hand down far more money to their children and heirs. Republicans love to call the estate tax a “death tax,” and suggest that it harms countless family inheritances. But the estate tax only kicks in when someone inherits more than $5.5 million, or $11 million for married couple. Money below the $5.5 million threshold is not subject to the estate tax. Repealing it would give the wealthiest 0.2 percent of estates an average tax break of over $3 million.

In Indiana, Trump will point to Kip Tom, a seventh generation Indiana farmer, as evidence that the estate tax can put farmers out of business. But Tom is not your average farmer. His company’s farms are larger than the island of Manhattan, he ran for Congress, and was in the running to be Trump’s Secretary of Agriculture. If the estate tax does end up being burdensome for his family, his estate will be able to spread out payments over a 15-year period.

Only about 80 small farms and business estates will pay the tax in 2017. The heirs to those farms will pay about one percent of all estate taxes, according to the nonpartisan Tax Policy Center.

Corporations are even bigger winners.

The biggest change in Trump’s tax reform plan is a overhaul of the corporate tax code. Republicans are proposing dropping the top rate for corporations from 35 percent to 20 percent. To sell that, they will tout the fact that the US has the highest corporate tax rate on the books in the developed world. But the amount that corporations actually pay is roughly in line with other developed economies. The conservative-leaning Tax Foundation estimates that the corporate cut will cost $1.6 trillion in lost government revenue over the next decade.

The second major shift is dropping the rate for businesses known as pass-through corporations from 39.6 percent to 25 percent. These are companies like LLCs whose income is “passed through” to the owner and taxed as individual income. Trump runs about 500 pass-throughs, according to his lawyers.

As Mother Jones has written, few owners of pass-through companies make enough to be subject to the top individual rate, which goes into effect after a couple makes more than $466,000. Nearly 80 percent of the benefits of cutting the pass-through rate to 25 percent would go to millionaires, the Tax Policy Center found. Republicans say the pass-through cut is designed to help small businesses. The Tax Foundation estimates that the pass-through cut will cost $750 billion over the next decade.

Cutting the pass-through rate creates a huge incentive for top-earners like doctors and lawyers to reclassify their salaries as pass-through income. Senior administrations officials told reporters on Tuesday that there will be provisions to prevent that from happening. Seth Hanlon, a tax expert at the liberal Center for American Progress, tells Mother Jones that making that work in practice will be impossible. And even if they could, he says “the entire loophole is an abuse.”

The third leg of corporate tax reform is moving towards a “territorial” tax system in which foreign profits are taxed at an unspecified lower rate. The US currently taxes profits earned abroad by American companies, which has led businesses to stash about $2.6 trillion in other countries.

History shows that rather than investing in their employees, corporations will use these tax-free funds to reward their investors. In 2004, Republicans tried a “one-time” tax holiday for foreign profits. Companies used the preferential rate to reward shareholders before going back to amassing cash abroad. Republicans argue that eliminating taxes on foreign profits will incentivize investing in the US. But it looks more likely to encourage multinationals to spend more abroad and find loopholes that let allow them to keep money overseas.

The cuts are likely to cost trillions of dollars.

It’s too early to say how much tax reform will cost. Among the many unknowns, Republicans haven’t gone into much detail about what loopholes they plan to eliminate or said what income levels will fall into each tax bracket. The Tax Policy Center has estimated that a similar tax plan proposed by House Republicans would cost about $3.1 trillion over 10 years, with three quarters of the benefits going to the top 1 percent of taxpayers. The top 0.1 percent of taxpayers would, on average, get a $1.3 million tax cut.

Republicans argue that independent estimates are flawed because they vastly underestimate how much economic growth the cuts will generate. That is not what the historical record suggests. After Kansas essentially gutted its tax system in 2012, revenue tanked and legislators were forced cut programs or tap into rainy day funds to keep the government operating. In June, the Republican-controlled state legislature overrode Gov. Sam Brownback’s veto and repealed many of the cuts. Nor did George W. Bush’s 2001 tax cut for the wealthy lead to much employment growth. Still, Republicans have faith that Congress’ nonpartisan budget experts are wrong. A senior administration told reporters on Tuesday that “it will be a deficit neutral bill when economic growth is taken into account.”

Back in February, Treasury Secretary Steven Mnuchin said “there will be no absolute tax cut for the upper class.” The claim was quickly dubbed the “Mnuchin Rule.” On Sunday, CNN’s Jake Tapper asked him about the rule again. “When you were selected as Treasury Secretary, you made a very specific promise,” Tapper said before showing a clip of Mnuchin saying the rich wouldn’t get a tax cut. “Can you reaffirm that pledge?”

“I did say that,” Mnuchin replied.

Read the full framework below.