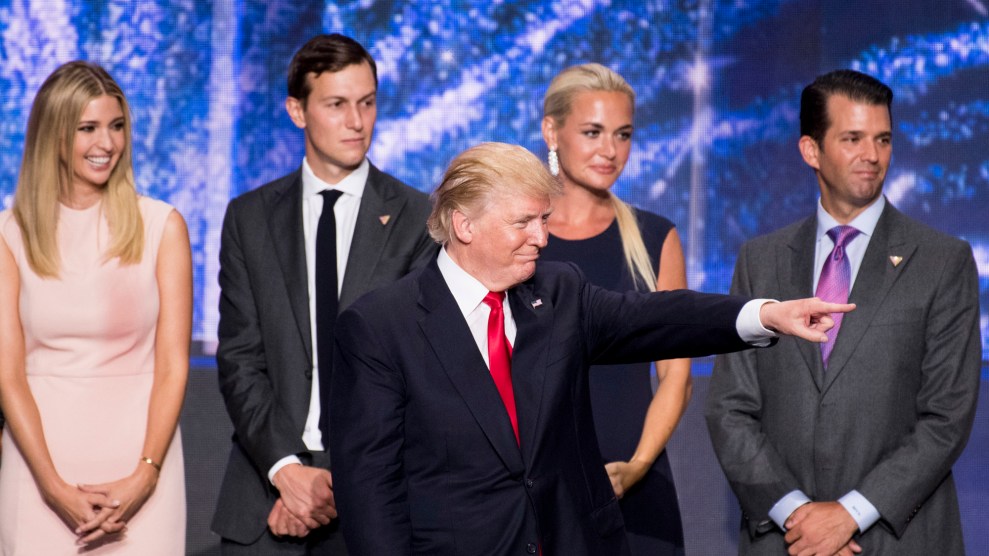 For months, Donald Trump and his lieutenants insisted there was no collusion between the Trump crowd and Vladimir Putin’s regime during the 2016 election. But after news broke of the June 9, 2016, meeting that brought Donald Trump Jr., Jared Kushner, and Paul Manafort together with a Kremlin emissary bearing dirt on Hillary Clinton as part of a secret Russia government effort to help Trump, no one could accurately say there had been no collaboration between the Trump campaign and the Russian government. So the Trump crew then shifted its denials and claimed that nothing came out of the meeting. But given that the Trump camp first covered up the existence of the meeting and then lied about its origin and purpose—until Trump Jr. was forced to release emails about the gathering—there is no good reason to accept the assertion that the session was a bust. Moreover, a review of the recent statements issued by Trump Jr. and Kushner about the meeting reveals an important contradiction between their accounts.

The emails sent before the meeting indicated that a representative of the Russian prosecutor general would be conveying government information that the Trump campaign could use against Clinton, and Trump Jr. expressed enthusiasm about this prospect. Kushner and Manafort received those emails, as well. Both Kushner and Trump Jr. have recently put out similar statements that dismiss the whole episode as a nothing-burger. But there is an intriguing difference in their recollections.

As I recall, at or around 4 pm, Rob Goldstone [the manager of Emin Agalarov, a pop singer and Russian business contact of the Trumps] came up to our offices and entered our conference room with a [Russian] lawyer who I now know to be Natalia Veselnitskaya. Joining them was a translator and a man who was introduced to me as Irakli Kaveladze [a US-based executive in the Russian development company run by Agalarov and his father]. After a few minutes, Jared and Paul joined…After perfunctory greetings, the lawyer began telling the group very generally something about individuals connected to Russia supporting or funding Democratic Presidential Candidate Hillary Clinton or the Democratic National Committee. It was quite difficult for me to understand what she was saying or why. Given our busy schedules, we politely asked if she could be more specific and provide more clarity about her objective for the meeting. At that point, Ms. Veselnitskaya pivoted and began talking about the adoption of Russian children by U.S. citizens and something called the Magnitsky Act…At this point, Jared excused himself from the meeting to take a phone call.

I arrived at the meeting a little late. When I got there, the person who has since been identified as a Russian attorney was talking about the issue of a ban on U.S. adoptions of Russian children. I had no idea why that topic was being raised and quickly determined that my time was not well-spent at this meeting. Reviewing emails recently confirmed my memory that the meeting was a waste of our time and that, in looking for a polite way to leave and get back to my work, I actually emailed an assistant from the meeting after I had been there for ten or so minutes and wrote “Can u pls call me on my cell? Need excuse to get out of meeting.”…No part of the meeting I attended included anything about the campaign.

What’s different? Trump Jr. recounted that Kushner was present when Veselnitskaya discussed contributions to Clinton and the DNC that the Russians thought could somehow be used against Clinton. Kushner asserted he only heard the Russian lawyer talk about the adoption issue.

The conversation clearly was not confined to the Magnitsky Act (which imposed sanctions on certain Russian businessmen and officials) and the adoption matter (the Putin government blocked US adoptions of Russian children in retaliation for the Magnitsky Act). Rinat Akhmetshin, a Russian-born American lobbyist and a colleague of Veselnitskaya who was at the meeting, told the Washington Post that Veselnitskaya presented to the Trump advisers what she called “a great campaign issue” for the Trump campaign: allegations of Russian tax improprieties by a US venture capital firm whose executives were political donors, including one who contributed to the Clinton Foundation.

That is, the meeting did indeed cover what the emails said it would: information the Russians believed could be damaging to Clinton. Trump Jr. claimed this material was too difficult to understand. Still, his account suggests Kushner was present for this part of the discussion—which would mean Kushner, too, participated in the attempted collusion. Kushner’s statement, though, protects him from such a charge.

There is another interesting discrepancy in the various accounts. Akhmetshin said that Veselnitskaya gave the Trump associates a document describing the anti-Clinton allegations. “It was corporate stuff—lawyerly stuff,” Akhmetshin explained. But Trump Jr. said in his statement, “I have no recollection of any documents being offered or left for us.” Kushner, too, asserted in his statement, “I have no knowledge of any documents being offered or accepted.” So did Trump’s top advisers accept a document from Russian government sources as part of a Russian conspiracy to assist the Trump campaign?

Sorting out what occurred in Trump Tower on that day—and if any subsequent actions and contacts occurred—will be an important task for special counsel Robert Mueller and congressional investigators. Resolving these contradictions will be just a start.