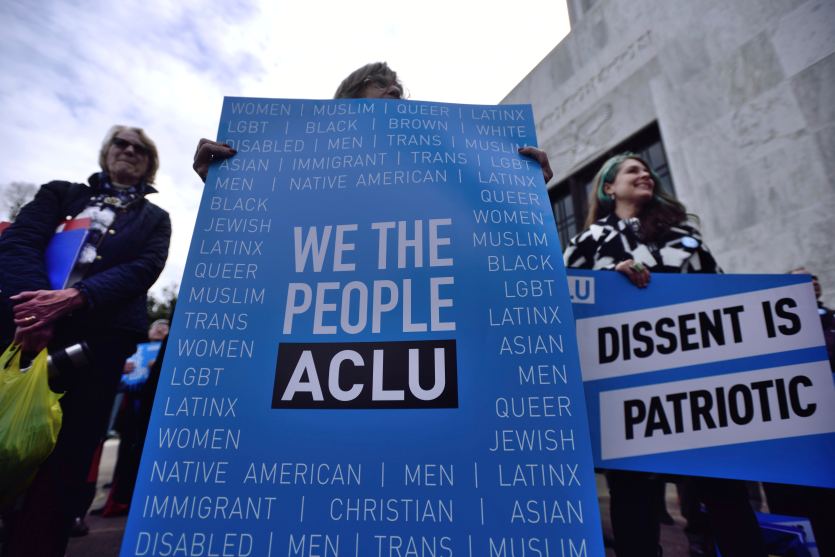 Activists with the ACLU of Oregon take part in a lobby day rally on the steps of the State Capitol in Salem, Ore., on March 23, 2017.Alex Milan Tracy/Sipa via AP Images

Kansas Secretary of State Kris Kobach, the country’s leading architect of suppressive voting restrictions, has described himself as “the ACLU’s worst nightmare.” On Sunday night, the ACLU struck back. The organization, which has seen a surge in membership and donations since the election, launched a 50-state campaign to expand voting rights—and it held the kickoff event in Kobach’s backyard, in a packed auditorium at the University of Kansas in Lawrence.

The campaign, called “Let People Vote,” is the largest effort in recent years to fight back against Republican voter suppression policies. It aims to mobilize people around the country to fight to change these policies. The event in Lawrence was accompanied by 600 simultaneous satellite events across the country.

Though ACLU chapters in each state will develop their own specific plans, the campaign will focus on four major policy recommendations for states to adopt:

The ACLU’s membership has quadrupled to 1.6 million since the election, leading it to expand beyond its typical focus on litigation and policy work. “We’ve never done grassroots mobilization before,” says Faiz Shakir, the ACLU’s national political director. “The only way you can have a national grassroots movement to expand voting rights in America is to go state by state by state. That’s damn hard to do.”

Donald Trump and Kris Kobach have teamed up to sanction voter suppression. We're launching a campaign to fight back. https://t.co/SeFR0lv6cK pic.twitter.com/wQKmfXeVdS

Shakir hopes the campaign will lead to concrete policy wins, like adopting same-day voter registration at every polling place in California, abolishing a law in Nebraska that requires ex-offenders to wait two years before becoming eligible to vote, and passing online voter registration and early voting in Mississippi.

Achieving these goals will be difficult in red states that have restricted voting rights and even in some blue states where many incumbents favor the status quo and don’t want to expand access to the ballot. But policy victories aren’t the only objective, Shakir says. The ACLU wants to reframe the debate over voting rights at a time when Republicans are aggressively pushing new voting restrictions at the state and federal level. “We’ve been playing defense on voting rights forever,” he says. “Changing the playing field by going on offense is really important. Even if we don’t get a ton of legislation through, we’re still changing the political dynamics in the country.” The new campaign is a recognition that the battle for voting rights can’t just be won in the courtroom, where voting rights advocates suffered their worst loss in decades when the Supreme Court gutted a central provision of the Voting Rights Act in 2013.

It’s no coincidence that the campaign kicked off in Kansas. Kobach is the vice chair of President Donald Trump’s election integrity commission, which has signaled an eagerness to raise fears of voter fraud, possibly as a pretense to build support for policies that suppress voting. (The ACLU has sued Kobach four times in Kansas.) Kansas ACLU members will lobby the legislature to pass Election Day registration, which Kobach recently blamed—wrongly—for mass voter fraud in New Hampshire.

“That is literally the thing he hates the most,” Shakir says. “We’re going for it right there in his backyard.”