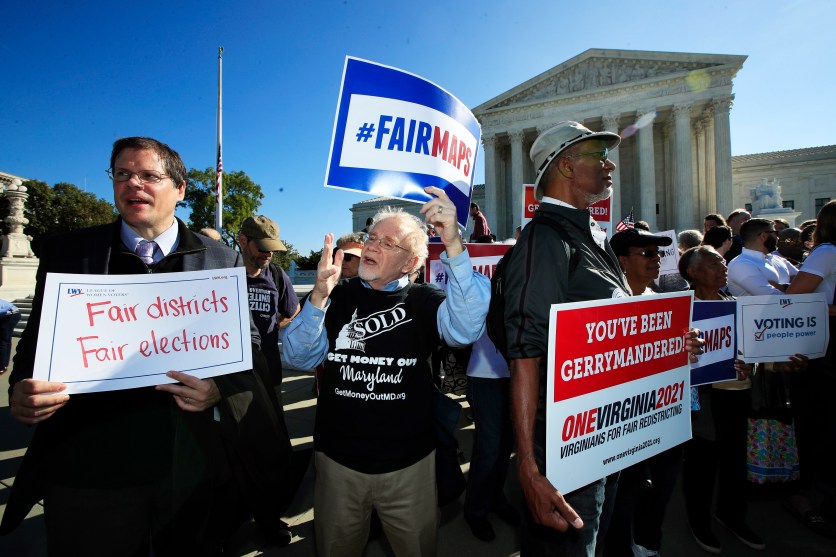 Activists rally against gerrymandering outside the Supreme Court on Tuesday.Manuel Balce Ceneta/AP

Creatively drawn political maps designed to give one party an entrenched advantage could be in danger, if questioning by the Supreme Court’s swing justice on Tuesday is any indication.

The court heard a landmark challenge to partisan gerrymandering in Wisconsin, a case whose outcome could strike down extreme gerrymandering or inspire more states to adopt it. Based on his questioning, Justice Anthony Kennedy, the court’s key swing vote, gave the impression that he was looking for a way to invalidate Wisconsin’s maps and possibly set an important precedent against this type of gerrymandering.

Kennedy was the first justice to ask a question in Tuesday’s opening arguments in the case, Gill v. Whitford. “Suppose the Court…decided that this is a First Amendment issue?” Kennedy asked Wisconsin’s solicitor general, implying that extreme partisan gerrymandering could violate the right to free speech by preventing those in the minority—in this case Wisconsin Democrats denied representation—from having an equal say in the political process.

Kennedy also seemed to suggest that the court could set a standard for when gerrymandering crosses a line. When Erin Murphy, who argued in favor of the Wisconsin Legislature, argued that state Democrats “have not come up with a workable standard to determine when a map is too political,” Kennedy responded that a manageable standard could be whether a map was drawn with the “overriding concern ” to “have a maximum number of votes for party X or party Y.” He asked whether such a scenario would violate the First Amendment or the Equal Protection Clause of the 14th Amendment.

Kennedy questioned only the lawyers for the state of Wisconsin, rather than the plaintiffs. Generally, conservative justices aggressively question the liberal challengers and vice versa. That Kennedy focused his questions on the Wisconsin side suggested he had a problem with the maps the Legislature had drawn and was looking for a reasonable way to strike them down.

“What if the court decided it was a First Amendment issue?” Kennedy asked.

Then again, in a 2004 case from Pennsylvania, Kennedy was also looking for a “limited and precise rationale…to correct an established violation of the Constitution in some redistricting cases.” He didn’t find one in that case, ruling against Democrats challenging a Republican gerrymander in the state. But he signaled he would be open to striking down extreme partisan gerrymanders if the court could agree on a standard to do so, like in racial gerrymandering cases where it’s possible to prove a clear violation of the Voting Rights Act.

Voting rights advocates are hoping that time has come. The same lawyer who argued the Pennsylvania case before the Supreme Court, Paul Smith of the Campaign Legal Center, also represented the challengers in Wisconsin today. “Gerrymandering today is not your father’s gerrymandering,” Smith told the court, adding, “This is the last chance for the court to do something” before the problem gets much worse in 2020.

Republicans gained control of the Wisconsin Legislature in the 2010 election and redrew the state’s political maps, turning a purple state into a solidly red one at the state legislative and congressional level, even as voters across the state remained about evenly split. In 2012, Barack Obama carried Wisconsin by 7 points and Democratic legislative candidates received 51.4 percent of the statewide vote, but Republican candidates won 60 of 99 seats in the state assembly.

This wasn’t just a problem in Wisconsin. Following the 2010 election, Republicans had full control of the redistricting process for state legislative and US House seats in 21 states, compared with 8 states for Democrats. The result was that Republicans had a virtual lock on four times as many state legislative and US House seats as Democrats did. Republicans hold as many as 22 additional House seats because of partisan gerrymandering, according to an analysis by the Associated Press—nearly the same margin as the 24 seats Democrats need to flip to take back the House. (During the 2012 election, Democratic House candidates won 1.4 million more votes nationally than Republicans, but the GOP won 33 more seats.) According to a recent analysis by Decision Desk HQ, Democrats are projected to win 54 percent of votes for the House in 2018 but pick up only 47 percent of seats.

In November 2016, following a challenge from state Democrats, a federal court panel in Wisconsin struck down the state assembly maps as “an unconstitutional political gerrymander” that was “intended to burden the representational rights of Democratic voters…by impeding their ability to translate their votes into legislative seats.”

To persuade Kennedy, plaintiffs in the case developed a test called the “efficiency gap” to measure the number of “wasted” votes for a party, such as when voters are placed in deep-red or deep-blue districts where they have no chance of influencing the outcome. The two scholars who developed the efficiency gap, Nicholas Stephanopoulos of the University of Chicago and Eric McGhee of the Public Policy Institute of California, found that “the plans in effect today” in states like Wisconsin “are the most extreme gerrymanders in modern history.”

Chief Justice John Roberts was skeptical of that test during Tuesday’s arguments. “The main problem for me,” he said, “is that in every case that comes before us, we will have to decide whether the Democrat wins or the Republican wins.” He dismissed the plaintiffs’ arguments against partisan gerrymandering as “sociological gobbledygook” and said that if the Supreme Court invoked the efficiency gap to strike down future gerrymanders, “the intelligent man on the street will say, ‘That’s a bunch of baloney. It must be because the Supreme Court preferred the Democrats over Republicans.’”

The court’s newest justice, Neil Gorsuch, compared the redistricting process to his “steak rub” which included “a pinch of this, and a pinch of that, but I’m not going to tell you how much of each.” His point was that the court could never agree on a workable standard to outlaw gerrymandering.

But earlier, liberal Justice Stephen Breyer said the court should be able to come to an agreement on a simple three-part test for invalidating partisan gerrymanders: Were the maps drawn under one-party control? Do they dramatically benefit one party over the other? Will that advantage last regardless of how the state swings politically to entrench one-party control? “I suspect that is manageable,” Breyer said.

All of that was true in Wisconsin, said Justice Sonia Sotomayor. The Wisconsin map “was the most partisan” map possible. “It worked,” she said, referring to Republicans’ huge legislative majorities. “If it was the most extreme map they could make, why isn’t that enough to prove…unconstitutional gerrymandering?”

Justice Ruth Bader Ginsburg added that the case was not about minor technicalities but huge fundamental rights. “What’s really behind all of this?” Ginsburg asked. “The precious right to vote.” Partisan gerrymandering had “stack[ed] the legislature” against democracy, so that “the result is pre-ordained.”