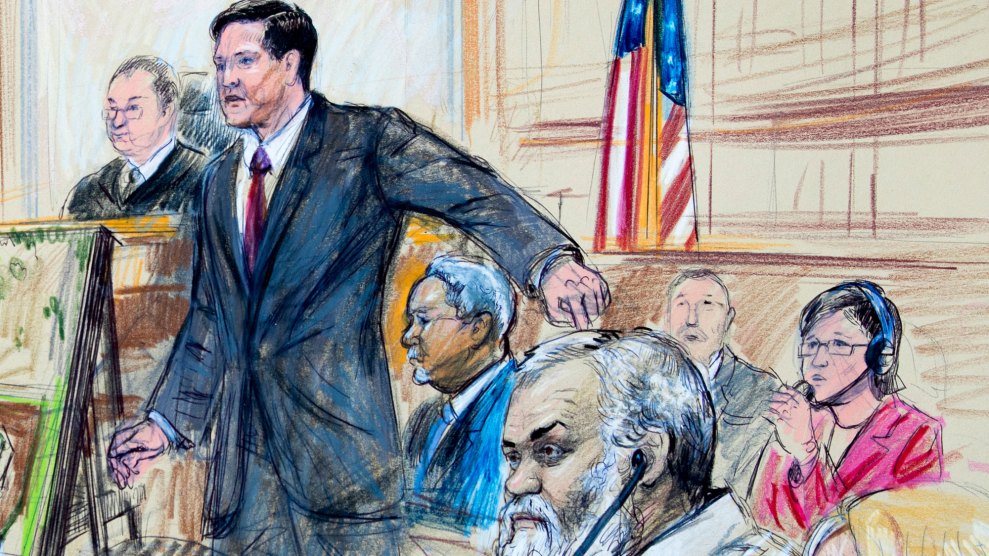 “Benghazi” was a rallying cry for Republican critics of Hillary Clinton, who blamed the former secretary of state for the 2012 attack on the US diplomatic compound in the Libyan city that killed Ambassador Chris Stevens and three other Americans. But on Monday, when the alleged mastermind behind the attack appeared in federal court, none of those Benghazi-obsessed Republicans were present. And it quickly became clear that the government’s case—now in the hands of Attorney General Jeff Sessions’ Justice Department—has major flaws.

Ahmed Abu Khattalah is the only person charged with the any crime related to the Benghazi attack. Federal prosecutors have charged him with 18 different criminal offenses, including conspiracy to provide material support to terrorists and murder of an internationally protected person (namely Stevens). US Special Forces captured Khattalah in Libya in 2014 and brought him to the United States, where the Obama administration insisted on trying him in a civilian court.

Even if the Washington courtroom was full of lawyers and a handful of journalists, not elected officials, the trial holds high stakes for Republicans. Both President Donald Trump and Sessions have said they think terror defendants should be taken to the Guantanamo Bay military prison and subject to military tribunals rather than tried before a jury in a regular federal court. But Sessions and his Justice Department lawyers are now responsible for prosecuting Khattalah and will bear the blame for an acquittal—which is a legitimate prospect.

Chief among the prosecutors’ problems is the testimony they plan to offer from a handful of Libyans. During opening arguments, prosecutor John Crabb disclosed that after the Benghazi attack, the government employed a Libyan snitch to befriend Khattalah and solicit damaging comments from him. The man, identified only as “Ali” in court, then lured Khattalah to a Libyan beach house, where the US military apprehended him three years ago. The US government paid Ali an astonishing $7 million for his services. Human rights activists and some former military officials have criticized such bounty payments in Iraq and Afghanistan for creating an atmosphere where warlords and spies rounded up their enemies and sold them to the United States, which imprisoned them indefinitely at Guantanamo without much evidence that they were terrorists.

Federal public defender Jeffrey Robinson made a similar criticism in his opening arguments. He told the jury to carefully scrutinize the government’s witnesses. “Many of them received significant benefits,” he said. He explained that Libya’s political situation is complex, and that far from being anti-American, Khattalah had been backed by the United States when he took up arms against the regime of Moammar Qaddafi in the Libyan civil war in 2011. The Qaddafi regime had imprisoned Khattalah in the infamous Abu Salim prison, where he was tortured for his conservative Islamic beliefs. Khattalah’s role in the civil war left him with enemies who would be happy to see him take the blame for the attacks on the US compound, Robinson said.

Sessions and his Justice Department lawyers are now responsible for prosecuting Khattalah and will bear the blame for an acquittal—which is a legitimate prospect.

The government’s other challenge in securing a conviction against Khattalah is one that’s plagued terrorism prosecutions since the launch of the Iraq War: allegations of torture. When US special forces captured Khattalah, they beat him, put a mask over his head, and gagged him. They brought him back to the United States on a boat trip that lasted 13 days, during which intelligence officers interrogated him without the benefit of a lawyer and did not read him his rights.

Every time he went to the latrine or left his room on the boat, Khattalah was masked, shackled, and given noise-cancelling headphones, his lawyers say. After several days of questioning by intelligence officers, FBI agents took over and finally told Khattalah about his rights to a lawyer and to remain silent.

The government says Khattalah voluntarily waived his right to a lawyer no fewer than 15 times during those sessions, and Crabb went to great lengths in his opening arguments to reassure the jury that Khattalah was not tortured or coerced by US agents into volunteering incriminating information to the FBI agents. But despite having gone to the trouble to build a special cell for Khattalah on the US Navy ship, the government somehow failed to record any of Khattalah’s interrogation, raising questions about those claims.

Prosecutors have asked the jury to rely on the FBI agents’ notes and testimony about the interrogations—a request that Robinson openly scoffed at. “What we don’t know, and you can never know, is what he actually said,” Robinson told the jury. “They deliberately chose not to record what he was saying.”

Because of the way Khattalah’s statements were obtained, his lawyers sought to have them excluded from the trial, but US District Court Judge Christopher Cooper allowed them to be admitted. Still, if Robinson succeeds in planting doubt about the veracity of the FBI’s claims or the jury believes that Khattalah’s statements were coerced, the government’s case could be in real trouble. That’s also because there is, as Robinson noted, virtually no physical evidence tying Khattalah to the murder of Stevens or other crimes he’s been charged with.

The prosecution has cell phone records it says tie Khattalah to some of the other people involved in the attack, as well as at least one eyewitness account that Khattalah had prevented anyone from attempting to rescue Stevens and the other Americans at the compound. Most persuasive is the security footage from the diplomatic compound that shows Khattalah there on September 11, 2012, the night of the attack. Crabb presented some of the video clips to the jury on Monday. But he also introduced about a dozen other people in the videos who happened to be at the compound and who he claimed were associates of Khattalah. That raised the obvious question of why none of them were also in the courtroom and charged with crimes.

That question is clearly something that the government is worried about. Prosecutors included a question on the jury questionnaire that may have been intended to weed out potential jurors who were skeptical about this, asking them, “Do you have strong feelings about the fact that Mr. Ahmed Abu Kattalah is the only defendant at this trial?”

Robinson sought to portray his client as low-hanging fruit—a “soft target” whom the United States picked up out of desperation to charge someone with the attack. Sitting in the courtroom, Khattalah looked the part of poor schlub his lawyers sought to make him out to be, with his long beard and baggy white shirt.

After the assault on the Benghazi compound, Khattalah didn’t behave like a wanted man. While the government was claiming he was in hiding after the attack, Khattalah was giving interviews to reporters in Libya. Before he was captured in 2014, he was interviewed by the New York Times and other outlets with some frequency, and he denied having a role in the assault. Robinson alluded to this in telling the jury, “The evidence will show that he’s here because he was easy. He didn’t hide because he didn’t do it.”

The trial continues Tuesday and is expected to run four to six weeks.