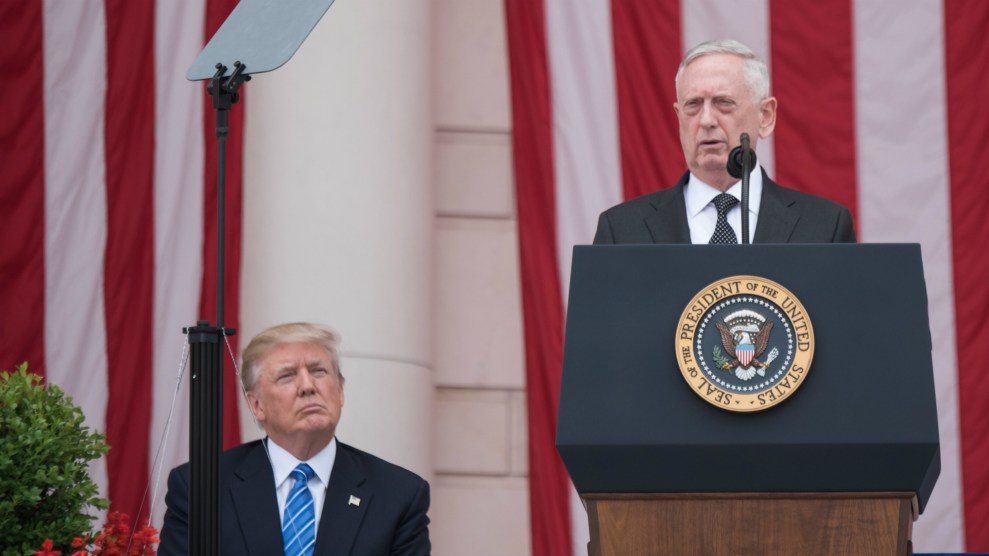 When President Donald Trump tweeted over the summer that he would ban transgender service members from the military, he claimed to have made the decision with input from generals and military experts. Now, Democrats are demanding proof.

More than 100 Democratic members of the US House of Representatives are asking Defense Secretary Jim Mattis to hand over any letters, emails, telephone transcripts, or meeting logs that would show whether Pentagon officials did in fact advise Trump to block transgender service members prior to the July Twitter announcement. “We seek access to these materials in order to determine whether the president, his national security team, and military leaders are actively coordinating policy with one another, or whether the president’s transgender ban announcement reflected a breakdown in communication,” they wrote in a letter sent to Mattis on Tuesday morning.

After consultation with my Generals and military experts, please be advised that the United States Government will not accept or allow……

….Transgender individuals to serve in any capacity in the U.S. Military. Our military must be focused on decisive and overwhelming…..

….victory and cannot be burdened with the tremendous medical costs and disruption that transgender in the military would entail. Thank you

Trump’s announcement of the ban surprised defense officials at the time. Sources close to Mattis, who was on vacation when Trump tweeted, reportedly said he had only been given a day’s notice and was horrified that the president had resorted to social media to make such a sweeping statement. The Pentagon referred all related press inquiries that day to the White House, which was unable to immediately clarify how the policy would affect thousands of active-duty transgender troops. Joint Chiefs Chairman Gen. Joseph Dunford, the top military officer, later told the Senate that he has advised administration officials against a ban.

“When you look at the shock that was evident in the responses from the Pentagon, it would seem there had been no conversation prior to his tweet,” says Rep. A. Donald McEachin (Va.), who drafted the letter to Mattis and is a member of the House Armed Services Committee and the Congressional LGBT Equality Caucus. Among the other 115 signatories to the letter are Reps. Joe Kennedy III (Mass.), Pramila Jayapal (Wa.), Debbie Wasserman Schultz (Fla.), and Caucus Chair Joseph Crowley (N.Y.). If defense officials did not advise Trump to ban transgender service members prior to the tweets, McEachin says, “it would mean at a minimum that the president of the United States has lied to the American public again,” and “that he is turning his back on the LGBT community.”

In a policy directive from August, Trump clarified that Mattis would have the authority to determine whether active-duty transgender soldiers could continue serving, but that no new transgender recruits would be allowed to join. That reversed an Obama-era policy that had allowed transgender troops to serve openly and that created a road map for the military to accept new transgender recruits soon. Starting in March, Trump’s directive will also reverse an Obama policy that allowed the Pentagon to pay for sex reassignment surgeries of eligible active-duty troops.

Tuesday’s letter to Mattis is the latest congressional push to stop Trump’s policy on transgender service members. Dozens of Democratic senators, including Bernie Sanders, Kamala Harris, and Elizabeth Warren, wrote to Mattis in July to voice opposition to the proposed ban. And in mid-September, Sens. John McCain (R-Ariz.), Jack Reed (D-R.I), Susan Collins (R-Maine), and Kirsten Gillibrand (D-N.Y.) introduced a bill that would block military leaders from dismissing active-duty soldiers simply because of their gender identities. “Any member of the military who meets the medical and readiness standards should be allowed to serve—including those who are transgender,” McCain wrote.

“We have strong concerns about the process by which your ban was created,” McEachin and other Democratic members of the House wrote to Trump in August. “News reports have characterized your ban as a ‘snap decision’ that ‘caught [the Pentagon] off guard.’ Decisions that touch on national security demand careful consideration and responsible debate.”

Trump has given Mattis until February to consider how to implement the administration’s policy. In the meantime, transgender service members and cadets who have been affected are suing the Trump administration in a bid to stop it from taking effect.