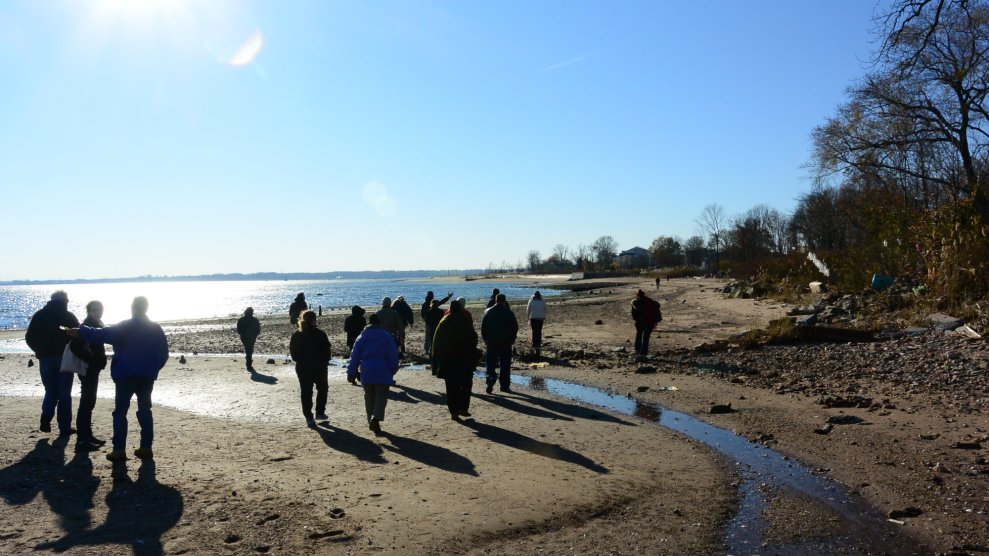 Hurricane Sandy hit the quiet beach community of Tottenville on Staten Island hard. Two of the more than 14,000 people who lived there were killed when the storm surge sent waves up to 16 feet high destroying homes. Five years later, many haven’t been rebuilt.

Disasters often spark efforts to prevent similar problems in the future. When it comes to the flooding of coastal communities during hurricanes, the approach typically has been to keep water out by either erecting sea walls or encouraging residents to move inland. In contrast, planners preparing for the next big storm in Tottenville are creating a project that, instead of keeping water out, “embraces” it. The project is called Living Breakwaters, and it’s designed to substantially reduce the size of massive and destructive waves during major storms by creating a barrier that protrudes out of the water. That barrier contains an oyster reef that will, in turn, establish an ecosystem further protecting the coastline and diminishing the power of the waves.

The project is called Living Breakwaters, and it’s designed to substantially reduce the size of massive and destructive waves during major storms by creating a barrier that protrudes out of the water.

Sandy hit in October 2012, causing more than $70 billion worth of damage. At least 117 people died from the storm and 650,000 homes in New York and New Jersey were damaged or destroyed. Government officials scrambled to respond to the devastation and prevent such destruction in the future. The Federal Emergency Management Agency administered checks for emergency repairs and brought food, fuel, and water into hard-hit areas. The Environmental Protection Agency helped fix damaged sewage treatment plants and assessed the condition of drinking water. Even the Army Corps of Engineers and Homeland Security were involved in the recovery effort.

The Department of Housing and Urban Development was responsible for giving localities money to work on longer-term recovery efforts through the Community Development Block Grant Disaster Recovery Program. In the past, most of that effort focused on rebuilding damaged areas, but after Hurricane Sandy, HUD also prepared for the future. The agency invested nearly $1 billion in a competition aimed at finding creative ways to do just that.

The Rebuild by Design competition was launched by the Hurricane Sandy Rebuilding Task Force, headed by former Obama HUD Secretary Shaun Donovan. Ten teams designed innovative resiliency plans for specific communities with financial support from private sources such as New York University’s Institute for Public Knowledge, which supports research into areas of public concern, and the Rockefeller Foundation. In 2014, HUD awarded six projects a total of $920 million through the Community Block Grant Disaster Recovery program. The competition led to the creation of a private organization called Rebuild by Design, which now works with communities around the world to develop projects focused on resilience.

The project, which received $60 million from HUD, was designed by Kate Orff, the first landscape architect to be awarded the MacArthur fellowship. Sandy damaged not just homes and businesses, but also the entire southern shoreline, which had already been receding. She explains that her firm SCAPE wants “to literally make this a living piece of infrastructure.” The oysters would not only have a habitat but “could help the breakwater become more of an artificial reef that can grow and expand with climate change.” The breakwaters will attract sea life and sea water will be further purified by the presence of the oysters—creating a healthier ecosystem. She describes this approach as “the value of nature-based infrastructure.” Over an extended period of time, she explains, offshore ecosystems have the potential to “help to reduce wave action and erosion.”

The Tottenville community has generally been positive about this project, says Jim Pistilli, who heads the Tottenville Civic Association. But some neighbors worry it will bring in too many visitors, and others doubt whether a novel, untested approach will even work. But Pistilli says the more traditional approach of building a seawall wouldn’t make sense. “We don’t want something out in the ocean that’s jetting up, obstructing the view,” he says. “In Tottenville we look very favorably toward the breakwaters—doing the job but at the same time being aesthetically and ecologically very pleasing.”

“In Tottenville we look very favorably toward the breakwaters—doing the job but at the same time being aesthetically and ecologically very pleasing.”

The project was approved in 2014, and the last three years have been spent in an intensive permitting and environmental review process, which Dan Greene, a lawyer in the Governor’s Office of Storm Recovery in New York state, describes as one of the most rigorous he has ever seen.

“Innovative projects are looked at with a high degree of scrutiny by regulatory agencies,” he says, “because they have responsibility for permitting these permanent structures in our waterways and nobody wants to get it wrong.”

For Greene, the breakwaters illustrate an important shift in infrastructure planning. Instead of having an unattractive and potentially ineffective gray barrier protecting Tottenville, the breakwaters will potentially be an aesthetically pleasing project that revitalizes an ecosystem in the water, restores the shoreline, and helps connect the community with the water. “These are intended to be model projects that can be replicated elsewhere,” he says. The construction process is slated to begin in 2019 and finish sometime in 2021.

Pippa Brashear, director of planning and resilience at SCAPE, tells Mother Jones that breakwaters aren’t supposed to work alone in reducing risk along the shoreline. “The breakwaters provide a first layer of defense upon which other elements can be layered,” she explains. HUD’s Community Development Block Grant Disaster Recovery Program is also funding another resiliency effort to build dunes, which Brashear describes as “a second line of defense,” near the shoreline.

Living Breakwaters also invokes the past to reconnect residents with the water. In the 19th century, Tottenville was known as “the town the oyster built” because its economy and culture developed from oyster fishing. Pistilli can imagine the future, with a shoreline that will have not only “enriched…the people on the beach, but will have provided an enriched sea line for the entire community to enjoy.”