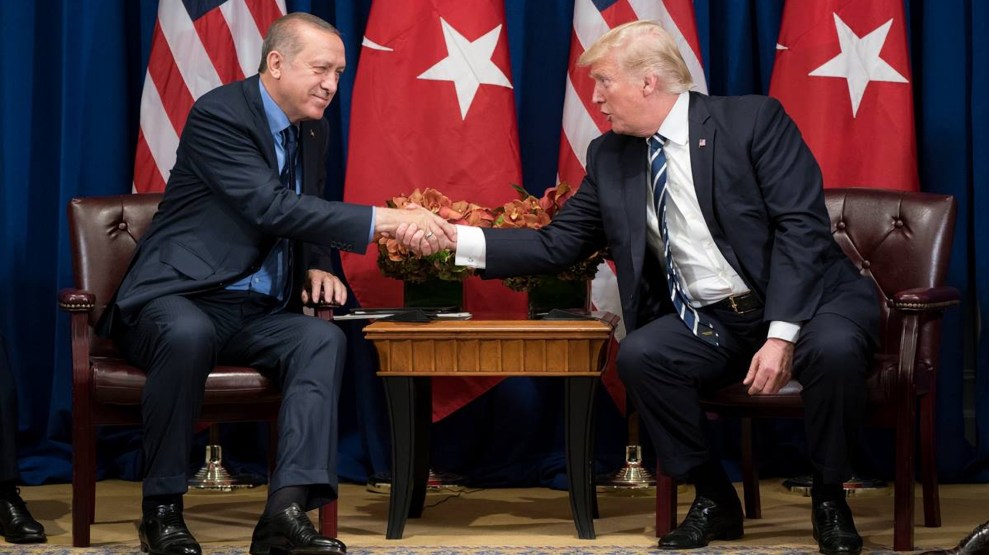 When the news broke this week that President Donald Trump—in a major departure from his predecessors—has personally interviewed candidates for US attorney positions in New York and Washington, DC, Democratic members of Congress and former US Attorney Preet Bharara, who was fired by Trump, criticized the move, expressing concern that Trump is looking to hire friendly prosecutors in locations where he has properties and other interests. The US attorneys in these places also may end up making decisions related to prosecutions in the Trump-Russia scandal. But even worse, the leading contender for one of these jobs—whom Trump is considering—also comes with a possible conflict of interest over a controversial criminal case that’s a top priority for a foreign leader close to Trump.

Turkish President Recep Erdogan has repeatedly demanded that the United States drop the prosecution of a Turkish-Iranian gold dealer, Reza Zarrab, who is set to go on trial in the Southern District of New York for money laundering and fraud charges. Federal prosecutors allege that Zarrab participated in a conspiracy to violate U.S. sanctions against Iran.

In March, Trump fired Bharara, who was overseeing the case. One of Trump’s leading candidates to replace Bharara is Geoffrey Berman. He is a law partner at Greenberg Traurig, where former New York Mayor Rudy Giuliani, a Trump booster and adviser, is a senior attorney and adviser. Giuliani has personally worked as part of Zarrab’s high-powered defense team. In February, he met with Erdogan to discuss the Zarrab case. Turkey is also a major Greenberg Traurig client, paying the firm $1.7 million this year for lobbying and legal work. Berman first emerged as a leading candidate for the US attorney position this summer.

Zarrab is one of nine men, including Mehmet Atilla, deputy CEO of one of Turkey’s largest state-owned banks and the country’s former economy minister, who were indicted by Southern District prosecutors in this case. Zarab and Atilla are in custody in the United States; the other defendants are in Turkey. Court filings in the case include transcripts from wiretaps placed by Turkish police that caught the defendants discussing plans to avoid U.S. sanctions imposed on Iran by trading gold for gas, the New York Times reported. In the tapes, the men indicate that they are acting under an order from Erdogan to increase trade, though it is not clear if Turkey’s president knew of the plot. In public remarks, Erdogan has indicated concern that he might be implicated in the case.

Last year, Erdogan demanded Bharara’s firing over the Zarrab case, the Washington Post reported. Since Trump became president, Erdogan has continued to push the US government to drop the case. US officials fear the recent arrest of a US consulate employee in Istanbul with a Turkish bid to win leverage it can use to kill this prosecution.

Erdogan directly raised his concerns about the case during a September 9 call with Trump. Turkey also employed Trump’s former National Security Advisor Michael Flynn as a lobbyist while Flynn also advised Trump during last year’s campaign. (There is no public indication that Flynn worked on this particular issue for Turkey.) During a meeting with Erdogan at the United Nations last month, Trump said the Turkish leader “has become a friend of mine.”

The White House has defended Trump interviewing US attorney candidates as a presidential prerogative. But by considering and interviewing Berman, Trump is also inserting himself into a possible conflict of interest related to the Zarrab case.

On Wednesday, at a Senate judiciary committee hearing, Sen. Richard Blumenthal (D-Conn.) asked Attorney General Jeff Sessions about Trump personally vetting U.S. attorney candidates. Sessions defended Trump’s right to do so. Afterward, Blumenthal told Mother Jones that Trump’s involvement is alarming. “The firing of Preet Bharara smacks of political interference and the interviewing of his successor simply adds to that impression and it impugns the integrity of the Department of Justice,” he said. “I think the public is owed an explanation for why this unprecedented procedure has been adopted.”