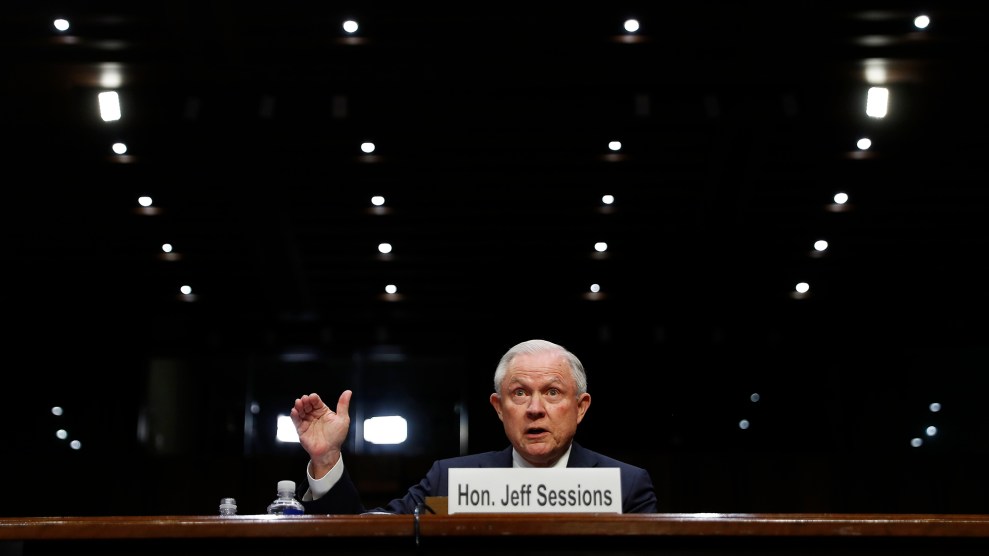 Attorney General Jeff Sessions confirmed Wednesday that there have been communications between the Justice Department and President Donald Trump’s controversial election fraud commission, amplifying concerns that the two bodies may be working together to make it harder for Americans to vote.

The actions and records of the election commission so far have confirmed fears among voting rights advocates that the commissions’ leaders are determined to compile evidence of voter fraud—of which there have been few documented cases—with the likely goal of imposing tighter restrictions on registering and voting. The commission’s communications, revealed earlier this month as part of a lawsuit, have raised concerns that it is not acting alone in its work. Voting rights advocates became concerned that the Justice Department and the commission were coordinating in June, when on the same day that the commission requested data from states on every registered voter, the Justice Department’s Civil Rights Division asked states to turn over information on how they maintain their voting rolls.

Communication between the Justice Department and the commission may also raise legal questions if the department is sharing data with the commission that is protected by privacy laws. The Justice Department is also restricted by a policy written by the White House counsel in January that prevents it from sharing certain information about ongoing investigations and prosecutions with the White House.

Sessions appeared before the Senate Judiciary Committee for a Justice Department oversight hearing on Wednesday. Sen. Amy Klobuchar (D-Minn.) asked him whether anyone working for him was coordinating with the commission. Sessions acknowledged communications but denied coordination. “I don’t know that coordinating is correct,” he responded. “We’ve been asked for assistance on several issues.”

Sessions also broadly endorsed the mission of the commission, stating, “I think it’s quite appropriate for the president to have a commission to review possible irregularities in elections.”

In their letter, committee Democrats expressed concern over potential coordination between the commission’s conservative members and the Civil Rights Division. “If these communications concern ongoing or contemplated cases or investigations in the Civil Rights Division, they could violate the Administration’s policy limiting contacts between the White House and the Department,” the letter stated.

Democrats on the committee had already requested communications that members believe would include those listed on the index, and they renewed that request in their letter. The “index shows the Department has records of these communications in its possession and should be able to produce them to us without further delay,” they wrote.

Voting rights advocates also want to know more about the communications between the commission and the Justice Department. Wendy Weiser, a voting rights expert at the left-leaning Brennan Center for Justice, tweeted during the hearing:

Sessions: DOJ has been asked by the fraud commission "to assist" on "several issues." What are those? We are entitled to know.

As Mother Jones previously reported, the index cast doubt on the legality of the commission’s activities, including coordination with the Department of Homeland Security and third parties outside of government that the commission may hire to analyze the voter information it receives.