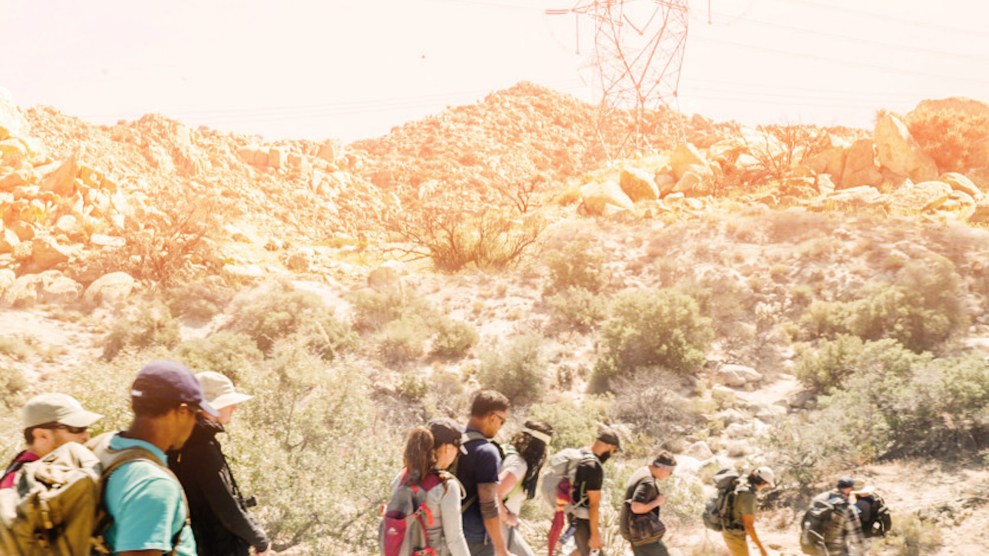 Border Angels is an immigrant-advocacy group that organizes hikes into the southern California desert to distribute water along various routes for migrants crossing the US-Mexico border. Last month, along with about 40 volunteers, I tagged along to film one of these “water drops.” After five hours working under the desert sun, a handful of the Border Angels crew hung around a gas station parking lot. Snacks and sodas in hand, they traded laughs and stories from the trek as the border wall loomed in the valley over their shoulders. Some had a close personal connection to someone who had previously crossed: a father, a grandfather, a girlfriend. But some did not.

I had wanted to put together a simple short film about their water drop operation. But like America’s immigration story, there wasn’t a single or simple story to craft out of this cast of characters. Instead I decided to feature the moments that stood out without forcing everything into one stand-alone narrative—and it seemed like Instagram, with its one-minute limit, provided just the right bite-size length for the scenes. But more than that, with “Instagram carousels” you can group smaller bits together to create experimental longer-form storytelling. The captions were then the final glue to hold it all together. The result is a documentary collage of my time spent with the Border Angels.

Check out the posts below—and also let us know what you think of the new format.

A non-profit based in California, Border Angels focuses on undocumented immigrant issues. The group’s first trips to distribute water in the desert for migrants crossing the U.S.-Mexico border began in 1998. Today, Border Angels uses their water drops as an opportunity to galvanize public volunteers around their cause as well as to build empathy for migrants. Mother Jones joined the group for a day in September. Follow our Instagram mini-series #mojodayattheborder to get a glimpse of what the crossing journey is like. #borderwall #immigration #borderangels #documentary

In January, 2016 Border Angels opened their water drops to public volunteers. The signups peaked in November, 2016 with 400 people signing up to leave water for migrants attempting to cross the U.S.-Mexico border. Today, to keep the program sustainable, they limit signups to 20-60 per month. The exact locations of water drops are not publicized – the group has found their water bottles slashed with knives. Stay tuned to #mojodayattheborder for the rest of our Instagram mini-series. #borderwall #immigration #borderangels #documentary

In part 3 of this Insta-series, we meet Water Drop Route Leader Jonathan Yost who says that anger is a key component of activism. “There’s passion but there's anger. It pisses me off and that drives me. I think more people need to get in touch with that," he said. "If you don't have that, I just think that you'll give up and you'll accept defeat at some point. And that can't happen. Not in these times." Tomorrow, stay tuned to #mojodayattheborder for the final part of our Instagram mini-series. #borderwall #immigration #borderangels #documentary

In fiscal year 2016, Customs and Border Patrol reported 415,816 apprehensions of migrants crossing the border; there were 322 border deaths. Many Border Angels water drop volunteers have a personal connection to those who have crossed the deserts of the U.S.-Mexico border. See any episodes you may have missed of our Insta-series at #mojodayattheborder. #borderwall #immigration #borderangels #documentary