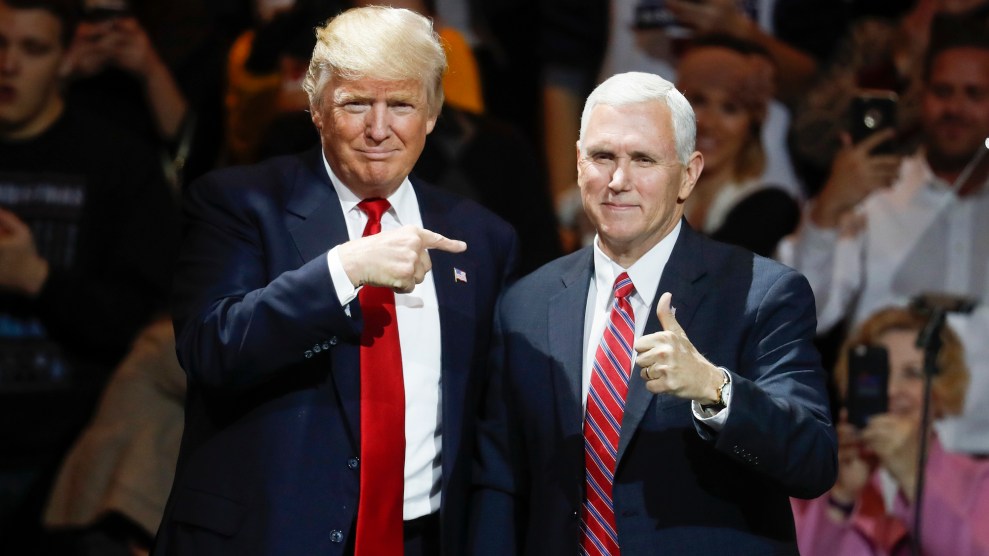 In a major loss for consumers Tuesday evening, Vice President Mike Pence broke a tie in the Senate to allow banks and credit card companies to continue using mandatory arbitration agreements—in other words, ensuring financial companies can continue to block their customers from suing them as a group.

Back in July, the Consumer Financial Protection Bureau (CFPB), the consumer watchdog created under the Obama administration, issued a rule blocking financial services companies from forcing customers into individual arbitration, which companies have long preferred in order to avoid costly class-action lawsuits. The Trump administration had fought to stop the rule from taking effect as planned, in March 2018. Tuesday’s vote now ensures that it won’t.

Sen. Sherrod Brown (D-Ohio) said in a statement that “by voting to take rights away from customers, the Senate voted tonight to side with Wells Fargo lobbyists over the people we serve.”

The White House issued a statement Tuesday night saying that Congress stood “up for everyday consumers and community banks and credit unions, instead of the trial lawyers, who would have benefited the most from the CFPB’s uninformed and ineffective policy.”

In 2015, a New York Times investigation found that arbitration “often bears little resemblance to court.” Unlike open court, arbitration judges are generally hired by the company accused of wrongdoing and the decisions are usually not made public. “Private judging is an oxymoron,” Anthony Kline, a California appeals court judge, told the Times in 2015. “This is a business and arbitrators have an economic reason to decide in favor of the repeat players.”

The CFPB estimates the rule would have cost the US financial sector less than $1 billion per year. In 2016, banks alone made more than $171 billion.

It has also found that class-action lawsuits provided about $220 million per year to 6.8 million consumers—in the cases it studied—which works out to just $32 per consumer, on average. Arbitration, meanwhile, has awarded customers more than $5,300 on average, but the CFPB identified only 16 people per year who benefited.

Proponents of mandatory arbitration have used that finding to argue arbitration is actually better for consumers. That, though, misses the point. Class-action lawsuits are often launched to right a wrong that costs a large group of people a small amount of money individually. As one judge wrote in 2004, “The realistic alternative to a class action is not 17 million individual suits, but zero individual suits, as only a lunatic or a fanatic sues for $30.” A CFPB study found that only 2 percent of consumers with credit cards would pursue legal action in a small-dollar dispute. Class-action lawsuits, rather, can benefit consumers by forcing a company to change its broader pattern of behavior.

Last year, Wells Fargo announced it would stand by its forced arbitration policy after a massive scandal came to light in which it had been creating unauthorized accounts for customers. In 2015, a judge dismissed a suit against Wells Fargo because of the arbitration clauses in customers’ contracts. As a result, customers have been left with fewer options to hold Wells Fargo accountable.

The Senate vote comes after an aggressive push from industry groups to stop the rule. Speaking on the Senate floor Tuesday evening, Sen. Elizabeth Warren (D-Mass.) said repeal would amount to a “giant wet kiss to Wall Street,” adding that Congress had been crawling with lobbyists in the lead-up to the vote.

To repeal the rule, Congress used an obscure law called the Congressional Review Act. The 1996 law gives Congress 60 working days to block rules issued by government agencies. It had only been used only once before President Donald Trump took office but has recently been invoked more than a dozen times to strike down regulations affecting everything from women’s health to state retirement plans.

Only two Republicans—Lindsey Graham of South Carolina and John Kennedy of Louisiana—voted to keep the rule in place. All Democrats voted in favor of the rule.

Before the Senate voted, Sen. Brown noted that Vice President Pence was in the Capitol building to break a potential tie. He correctly guessed what that meant: Equifax and Wells Fargo were about to win.