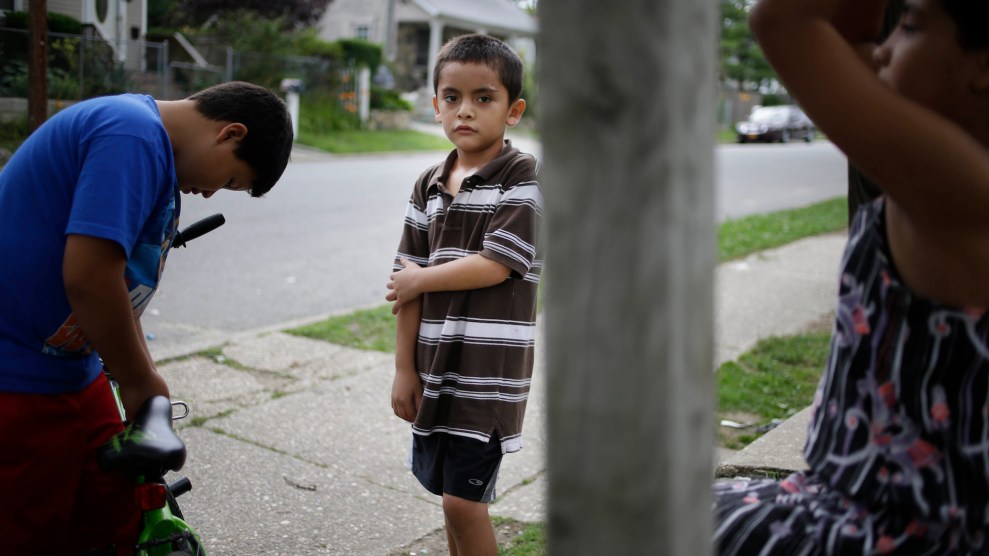 Kevin Torres, a 7-year-old who came to the United States from El Salvador unaccompanied, plays in front of his apartment building in Huntington Station, New York, in 2014. Seth Wenig/AP

In the waning days of George W. Bush’s presidency, Democrats and Republicans in Congress unanimously agreed to increase protections for victims of human trafficking. Years later, as tens of thousands of Central American children arrived at the border alone, those safeguards took on new significance. Instead of the rapid deportations faced by adults, child migrants were able to live with family members in the United States as they made their case for staying in the country.

But that could soon change. The White House is now demanding that Congress gut those protections as part of any legislation to spare undocumented immigrants who came to the United States as kids—known as Dreamers—from potential deportation.

On Sunday, President Donald Trump unveiled a list of provisions that would have to be included in order for him to back a bill protecting Dreamers. Among those provisions is one that would subject all unaccompanied children at the border to rapid removal proceedings that are currently used only for minors from Mexico and Canada. Trump also called for children seeking asylum to make their cases before judges, instead of less-adversarial asylum officers.

Immigrant advocates say the proposals, which would need to be approved by Congress, would deprive children of due process and put many at risk of being sent back to dangerous conditions in Central American countries racked by violence. The changes “would decimate the protections for these children,” says Megan McKenna, communications director of the advocacy group Kids in Need of Defense.

The administration’s proposals are designed to deter Central American children from coming to the United States. Between 2011 and 2014, the number of unaccompanied minors apprehended at the border each year quadrupled from 15,701 to 67,339, before falling to about 44,000 in the past year.

The increase has further strained America’s underfunded immigration courts. More than 40 percent of cases started by unaccompanied children in 2013 had not been resolved about two years later, the nonpartisan Migration Policy Institute found. Trump’s proposal calls for hiring 370 new judges, though it also asks for 10,000 Immigration and Customs Enforcement officers who will put more people into deportation proceedings.

“The kids are basically being used as bait at this point,” a federal field specialist told the news agency McClatchy in June

While child migrants wait for their cases to be decided, many live with family members who are already in the United States. The Migration Policy Institute has reported that the prospect of joining family creates a pull for kids to come north, along with the push provided by poverty and devastating gang violence in parts of Central America. The organization recommended hiring more judges to speed up the process, rather than weakening protections for children.

The Trump administration is trying to block these reunifications by targeting undocumented family members of children who come to the United States alone. Under the new “surge initiative,” Customs and Border Protection officers provide immigration agents with data to track down the children’s relatives in the United States. The family members are then detained, and possibly deported, for immigration violations or arrested for human smuggling.

“The kids are basically being used as bait at this point,” a field specialist with the Office of Refugee Resettlement (ORR), the federal agency responsible for unaccompanied minors, told the news agency McClatchy in June. Leah Chavla, a program officer at the Women’s Refugee Commission, says going after relatives has led more kids to “languish in detention.”

The White House’s proposal would also make it much easier to deport kids while they’re still at the border. In 2008, Congress created two processes for handling undocumented children who arrive at the border. Most of these children are placed by ORR in the setting that is in their “best interest,” which often means living with parents or other relatives. But Congress was concerned that too many kids from Mexico would come, Chavla says. So Mexican and Canadian children are given 48 hours to convince a Customs and Border Protection official that they are likely to be trafficked or persecuted in their home country. If they can, ORR takes custody. If they can’t, they’re quickly turned over to authorities in Mexico or Canada. Trump wants all unaccompanied children to be subject to the procedures for Mexican and Canadian kids.

Chavla says it can be tough for kids to tell border officials about experiences that give them a right to protection. Lenni Benson, an immigration law professor at New York Law School, says that CBP officers lack the training and expertise needed to get children to talk about trauma. A report released by Amnesty International in June found that CBP agents often use their discretion to make “arbitrary decisions” that violate laws protecting asylum seekers.

If you’re a child, “how are you going to represent yourself in court?”

In 2016, Mexicans made up 20 percent of unaccompanied minors but only 3 percent of children in ORR custody—meaning that most failed to convince border officials they deserved protection. Chavla says that doesn’t square with data from the United Nations High Commissioner for Refugees showing that Mexican youth are just as likely to meet criteria for international protection as those from Central America.

For children who aren’t immediately deported, Trump’s proposal would force them to make their asylum claims before a judge, instead of asylum officers. Sarah Pierce, a policy analyst at the Migration Policy Institute, says going before a judge is much more confrontational than what kids face now. If you’re a child, “how are you going to represent yourself in court?” Chavla asks, adding, “It’s just not due process.”

About 30 percent of unaccompanied children in court—some of whom go to court after failing in initial asylum claims—do not have legal representation, according to the nonpartisan Transactional Records Access Clearinghouse. The group has found that women and children are 14 times likelier to win their cases if they have representation. (Many children get pro-bono legal services, while others gain representation through a fund administered by ORR that would be eliminated under a House Republican bill backed by the White House.)

While kids argue their cases, the White House wants more authority to keep them in detention. It hopes to get it by having Congress scrap a 1997 settlement agreement that was reached after more than a decade of litigation. Under the settlement, unaccompanied children must have access to things like classroom education and be placed with parents or legal guardians without “unnecessary delay.”

Trump is also demanding that Congress ensure that children at the border are not considered “unaccompanied” if they have relatives in the United States. That change, which Pierce says Trump could make without Congress, would stop them from being transferred to ORR. Instead, they’d stay in the custody of the Department of Homeland Security. On Wednesday, CNN published a Justice Department memo that allows immigration judges to decide for themselves whether someone is an unaccompanied minor. That enables judges to strip migrants of unaccompanied-minor status if they’ve been been reunited with family or turned 18 since getting to the United States—forcing them to make asylum claims before a judge rather than an asylum officer.

Republicans have defended similar reforms by arguing that they will prevent children from making dangerous journeys to the United States. Before he became attorney general, Sen. Jeff Sessions (R-Ala.) co-introduced legislation that included three of the five policies for unaccompanied minors that the White House proposed on Sunday. The bill was called the “Protection of Children Act.”

In August, the Trump administration ended an Obama-era program that allowed some at-risk children in Central America to avoid smugglers by getting temporary permission to come to the United States before they left home. New York Law School’s Benson says the rhetoric about helping children is just that. “We are in an Orwellian world here,” she says. “That is not accurate. Not true. Propaganda. And they basically want to roll back the protections.”