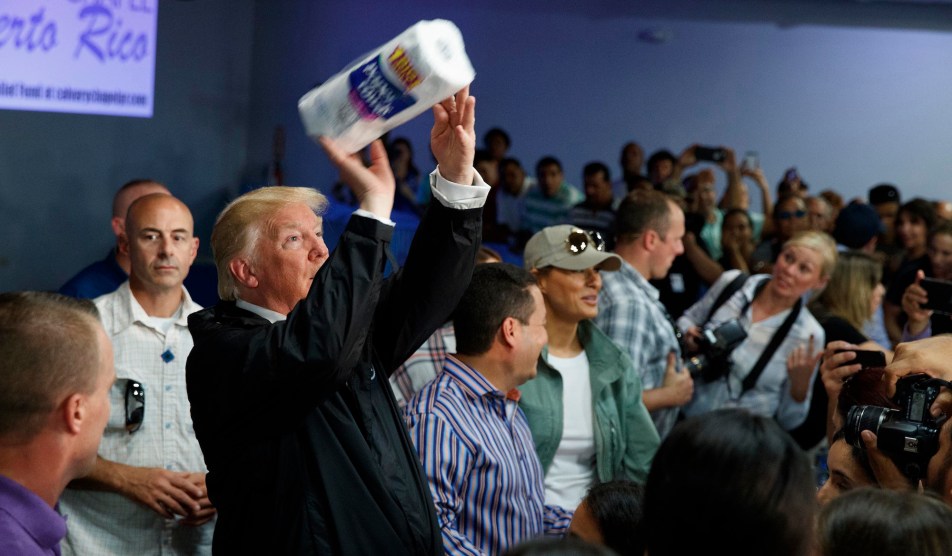 President Donald Trump tosses paper towels into a crowd as he hands out supplies at Calvary Chapel on Tuesday in Guaynabo, Puerto Rico. Evan Vucci/AP

During President Donald Trump’s visit to Puerto Rico on Tuesday, he met with Gov. Ricardo Rosselló, tossed donated items to people at a church in Guaynabo, and boasted about his administration’s efforts that he said had “saved a lot of lives.”

It didn’t go over well with locals.

“There is no respect,” said Zorahya Díaz, 36, who was enjoying a Medalla beer at El Watusi, a neighborhood hangout in the Santurce district of San Juan. We were talking over the din of a 10,000-watt portable generator that was keeping the lights on and the drinks cool on an island where roughly 95 percent of people remain without electricity. “That’s the thing. We cannot expect anything good [from the Trump administration] in that respect.”

Earlier in the day, upon his arrival in Puerto Rico, Trump had said the devastation from Hurricane Maria didn’t constitute a “real catastrophe” like Hurricane Katrina. He also seemed to blame Puerto Ricans for the strain that relief efforts were placing on the federal budget. “Now, I hate to tell you, Puerto Rico, but you’ve thrown our budget a little out of whack because we’ve spent a lot of money on Puerto Rico,” he said. “And that’s fine. We’ve saved a lot of lives.”

Díaz, who works at the public radio station at the University of Puerto Rico, was in San Juan for the first time since Maria hit on September 20. She lives in Toa Baja, a city about 30 minutes west of the capital. Parts of the town were submerged in water the morning after the storm because the government had to open five floodgates at the La Plata Lake Dam due to the heavy rains. The mayor reported that eight people were killed, and many homes were destroyed. Díaz said she heard from neighbors of a dead body being tied to a doorway to keep it from floating away, and another home where a dead horse ended up on somebody’s roof.

“These are the kind of stories you can hear if you walk in the barrio,” she said.

Trump’s words reinforced in her mind that Puerto Ricans are on their own. “We have to deal with this,” she said, “because gringos don’t know what’s good for Puerto Rico.”

Another man walking next to the hangout compared Trump’s playful tossing of rolls of paper towels to needy Puerto Ricans to a “t-shirt giveaway” that you’d see at a sporting event. When I asked him to elaborate or share his name, he said he was “too drained” to talk about Hurricane Maria or Trump.

Another woman, who didn’t want to reveal her name, asked, “What can you expect from Trump?” She says she saw part of the livestream video of the president’s meeting with Puerto Rican officials but “stopped because of the disrespect.”

She added that Trump’s visit and the words of Gov. Rosselló are “all politics at the end of the day,” and that she’s more worried about the ongoing debt crisis and how creditors will use the storm to reap more money from the island.

Tito Román Rivera, 36, said that Puerto Rico’s colonial relationship with the United States is behind much of its debt, and that relationship is the reason Puerto Rico needs help right now. “That’s the reason why we don’t have all the resources as a nation to deal with a situation like this one,” he said.

To him, Trump’s disrespect goes back to his initial tweets about Puerto Rico and Maria, when he wrote that Puerto Rican debt “sadly will have to be dealt with.” He found it “disrespectful” that Trump tweeted positive things about Texas and Florida after the storms there, “but Puerto Rico, you have trouble but you have to pay your debt. Come on, man.”

What else do you want to know about the crisis in Puerto Rico? Our reporters are taking your questions. Submit them here.