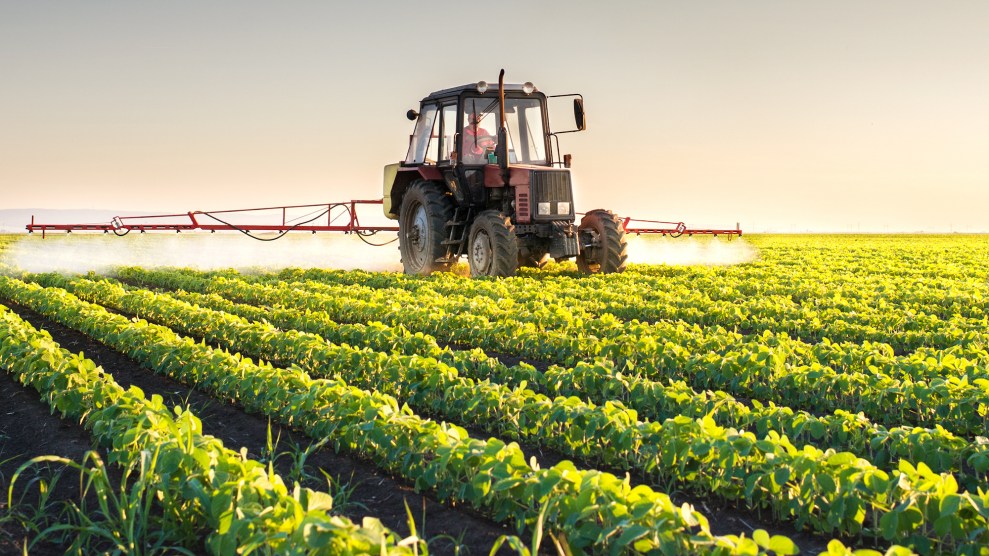 Update (11/20/2017): The Missouri Department of Agriculture has joined its Arkansas counterpart in limiting dicamba use during the 2018 growing season. In a statement  released last week, the Missouri ag agency announced it would ban the use of Engenia, a “low volatility” dicamba formulation marketed by the German chemical giant BASF, after July 15. For 10 counties clustered in the state’s southeastern corner, known as the Bootheel, where off-target dicamba damage was reportedly heaviest in 2017, the cut-off date will be June 1. The department said it “anticipates” issuing similar restrictions on the other two low-volatility dicamba formulations on the market, Monsanto’s Xtendimax and DowDupont’s Fexapan.

The farm-country showdown over an herbicide called dicamba, used on a genetically engineered seeds product marketed by Monsanto, just heated up. At a public meeting on Wednesday, the Arkansas State Plant Board voted by a vote of 10 to 3 to ban most applications of the weedkiller between April 16 and October 31. Scott Partridge, Monsanto’s vice president of global strategy, attended the meeting and gave a presentation defending the herbicide.

The EPA reports 3.6 million acres of soybeans were damaged by dicamba this year, as well as untold acres of tomatoes, watermelon, cantaloupe, vineyards, and even residential gardens.

The company, meanwhile, has a lawsuit pending, launched in October, seeking to “prevent the Plant Board from continuing to regulate the use of Monsanto’s new low-volatility dicamba herbicide.” Back on July 11, Arkansas banned dicamba for 120 days.

The new ban, which awaits final approval from a state legislative subcommittee, would essentially halt use in Arkansas of Monsanto’s latest blockbuster seeds next year: soybean and cotton varieties engineered to withstand both dicamba and glyphosate. These products offer farmers the ability to to spray dicamba directly on crops, leaving them intact while weeds die. But soybeans and cotton don’t emerge until early May—after the ban kicks in.

Arkansas acted because dicamba has a tendency to volatilize—that is,  after it has been applied, it’s prone to convert into a gas be carried from its intended site, potentially harming vegetation that gets in its path. The volatility problem increases as temperatures rise, hence the ban on use during warm months.

In response to the problem, Monsanto, as well as rival agrichemical giants BASF and DuPont, brought out “low-volatility” dicamba formulations, but this past growing season—the new seeds’ first year in widespread use—saw an explosion of complaints throughout the soybean belt of off-target damage. The Environmental Protection Agency reports 3.6 million acres of non-resistant soybeans alone were damaged by dicamba this year, as well as untold acres of tomatoes, watermelon, cantaloupe, vineyards, pumpkins, vegetables, tobacco, residential gardens, trees, and shrubs.

Monsanto claims that any lasting damage to crops must have resulted from the questionable decisions of farmers themselves: either failing to apply the weed killer according to the label, failing to clean their herbicide tanks properly, or illegally relying on old version of dicamba. But weed specialists at land-grant universities throughout the soybean belt fiercely dispute that assessment, leading to an extraordinarily open public battle between university weed scientists and a massive seed/pesticide conglomerate, covered here by NPR’s Dan Charles.

Meanwhile, the EPA is considering its own ban on dicamba after the 2018 growing season if the off-target damage problems continues. The agency’s approval of Monsanto’s and other companies so-called low-volatility formulations “automatically expire on November 9, 2018, unless EPA determines before that date that off-site incidents are not occurring at unacceptable frequencies or levels,” an agency spokesperson wrote in an email.

For Monsanto, the stakes are high. Back in 2015, the company invested around $975 million to expand dicamba production at a Louisiana facility. In an October note to investors, the company declared its new dicamba-resistant soybeans a “tremendous success” and vowed their acreage planted would double next year.