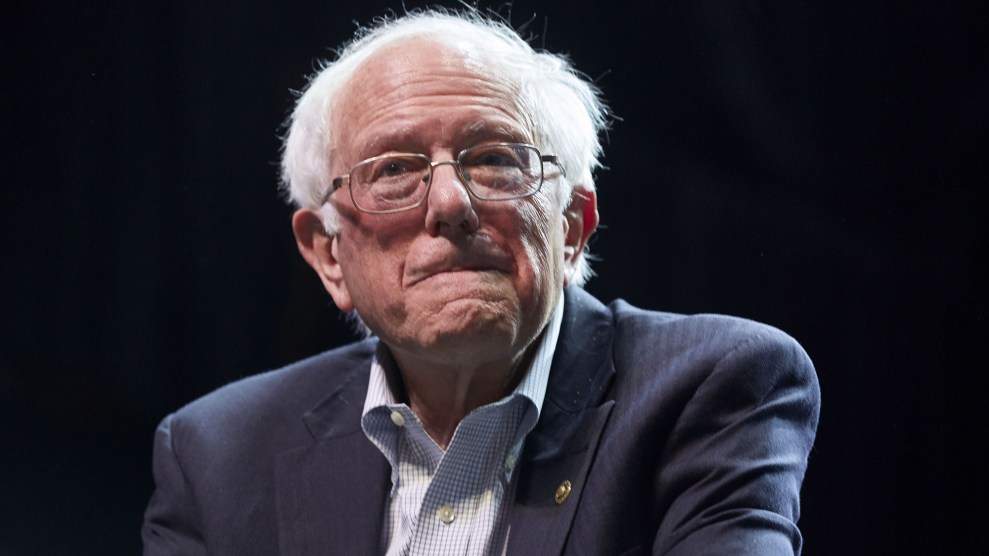 Sen. Bernie Sanders (I-Vt.) and a small group of other progressive senators introduced a sweeping $146 billion relief package for Puerto Rico and the US Virgin Islands on Tuesday. The measure calls for more local involvement in recovery decisions, infrastructure repairs that emphasize renewable energy and sustainability, parity for Medicare and Medicaid for the territories, and Congressional relief for Puerto Rico’s crushing debt burden.

“More than two months after Hurricanes Irma and Maria struck Puerto Rico and the Virgin Islands, half of the people there—American citizens all—still have no electricity,” Sanders told reporters when announcing the package Tuesday morning. “Many are struggling to get clean drinking water, and more than 100,000 people have left Puerto Rico alone. This is not acceptable, and we are here today to tell the people of Puerto Rico and tell the people of the Virgin Islands that they are not forgotten, they are not alone, and that we intend to do everything possible to rebuild those beautiful islands.”

The bill—which is supported by Sens. Kirsten Gillibrand (D-N.Y.), Elizabeth Warren (D-Ma.), Kamala Harris (D-Calif.), Ed Markey (D-Ma.), and Richard Blumenthal (D-Conn.)—comes in response to the $29 billion aid package that the Trump administration had requested, which Puerto Rico was to share with the hurricane-battered states of Florida and Texas. The price tag of Sanders’ bill is even higher than the amount requested by Puerto Rico Gov. Ricardo Rosselló, who asked Congress for $95 billion when he visited Washington in early November.

In a draft of the bill, Sanders allocates $270 million for Puerto Rico and $20 million for the US Virgin Islands for renewable energy and energy efficiency grants for local municipalities and homeowners; $8.55 billion over 10 years for their infrastructure and jobs programs; $34 million to restore clean drinking water and sewage disposal; $200 million for the Department of Veterans Affairs in Puerto Rico and the US Virgin Islands; and the elimination of the cap on general Medicaid funding for US territories. The island has historically not been reimbursed by the federal government at the same rate as states, which, island officials say, means they may be forced to remove up to 500,000 people from Medicaid.

The bill would also bar any public entity funded under the bill from being privatized. That will be a tough sell for congressional Republicans and several members of the island’s fiscal oversight board who have called for the privatization of the Puerto Rico Electric Power Authority (PREPA), which is burdened with $9 billion in outstanding debt.

San Juan Mayor Carmen Yulín Cruz, a fierce critic of Trump and the federal response to Hurricane Maria, has joined dozens of progressive organizations in supporting Sanders’ bill. In a statement, she described it as a “comprehensive plan that provides the blueprint for the transformation of Puerto Rico,” and notes that the bill “shows a great deal of respect and faith in [Puerto Ricans] when claiming that the recovery for Puerto Rico must be in Puerto Rican hands.”