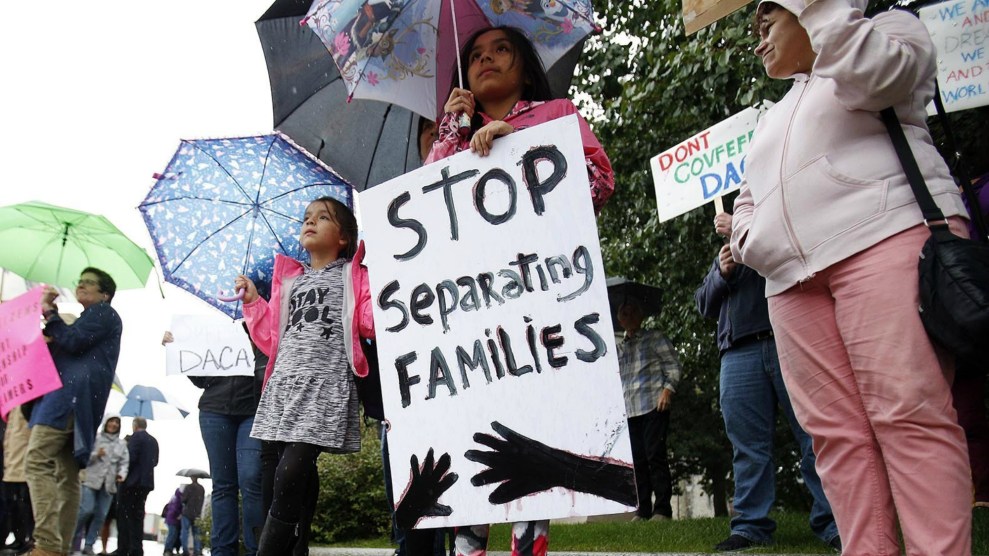 Eleven cities and counties across the United States announced on Thursday that they will provide free legal representation to immigrants facing deportation, part of a new initiative called the Safety and Fairness for Everyone (SAFE) Cities Network. The initiative, launched in collaboration with the Vera Institute of Justice, a national nonprofit and research organization, helps cities with funding and resources to help train legal service providers and share best practices.

Unlike in criminal court cases, immigrants generally do not have the right to a free court-appointed attorney during removal proceedings, and often have to bear the costs on their own.  Nationally, only 37 percent of immigrants facing deportation proceedings get access to a lawyer, and only 14 percent of immigrants in detention do, according to a report from the American Immigration Council, a nonprofit and advocacy group. As Mother Jones has reported previously, studies have shown that access to legal representation can drastically improve an immigrant’s chances of winning relief from deportation or release from detention. Without it, often immigrants and families are quickly deported.

Vera’s project comes at a time when cities and states are ramping up their efforts to protect undocumented immigrants against a potential crackdown. A Reuters analysis found that arrests of undocumented immigrants with no criminal history increased by more than 200 percent in the first half of the year. Though deportations have slowed, ICE agents have made 43 percent more arrests since Trump has been in office, compared to the same time last year, according to the Washington Post. Attorney General Jeff Sessions has also attempted to speed up deportations and reduce immigration court backlogs, though to seemingly little effect.

For cities like Atlanta, it will be the first time the city has ever provided legal defense for those facing deportation. “This support is needed now more than ever,” Mayor Kasim Reed said.

“Immigrants are our friends, neighbors, and co-workers, but new enforcement tactics are breaking up families and weakening our neighborhoods and our city,” Elizabeth Brown, council member for the City of Columbus, stated in a press release. The city will provide $185,000 to three groups, and received $100,000 in additional funding from Vera.

Providing universal representation is an approach that Vera has tested before. In 2013, the group helped start a pilot project called the New York Immigrant Family Unit Project (NYIFUP) that provided free legal defense services to immigrants detained at the Varick Street Immigration Court. A new report evaluating the program found that immigrants who participated were able to able improve their chances of remaining in the US. Before the project began, only 4 percent of immigrants who had no legal representation at the court were able to win their cases. With the help of the free legal defense, NYIFUP estimates that 48 percent of its cases will end successfully. The program has represented more than 1,770 people and also helped reunite more than 750 people with their families, according to the report.

Outside of the SAFE Cities Network, other cities have taken on their own efforts to provide funds for legal defense. In April, Seattle’s city council unanimously passed a resolution to allocate $1 million to a defense fund for immigrants and refugees, and increased that fund to $1.5 million with the inclusion of King County in August. Earlier this summer, Los Angeles city and county officials also approved an L.A. Justice Fund that, with help from outside donors, would provide up to $10 million for legal defense to immigrants.

“It’s inhumane for people to go to court with no lawyer,” Omar Siagha, a green card holder who was able to win his case through the NYIFP, said in a press release. “Everyone deserves a chance to explain their case to the judge.”