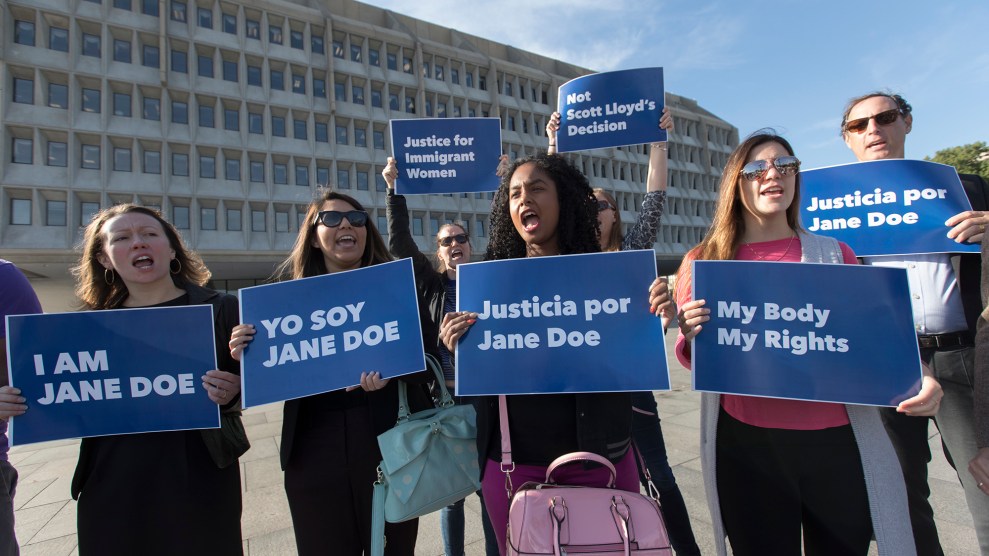 Emails released as part of a federal lawsuit shed light on the Trump administration’s efforts to thwart minors in its care from obtaining abortions. Last month, a pregnant teen known in court filings as Jane Doe obtained an abortion despite the administration’s monthlong effort to block her from obtaining the procedure. But her legal case continues as the ACLU sues to halt efforts by the government to dissuade and block other unaccompanied minors from receiving abortions.

The emails are part of a lawsuit that was filed in federal court in Washington, DC, by the ACLU on behalf of Jane Doe and other pregnant teens in government custody. Shortly after the suit was filed, the DC Circuit Court of Appeals allowed Doe to receive her abortion. But the ACLU is still fighting to proceed with a class-action suit on behalf of other unaccompanied minors who, like Doe, have been placed in the care of the Office of Refugee Resettlement (ORR) within the Department of Health and Human Services, which contracts with local shelters to care for them.

ORR’s director, Scott Lloyd, is a longtime anti-abortion activist who previously founded a self-described “pro-life apostolate” law firm. Lloyd changed ORR policy to prevent pregnant teens at these shelters from obtaining abortions, although the government has not gone so far as to challenge their constitutional right to terminate their pregnancies.

Government emails obtained by the ACLU as part of the case provide an extraordinary insight into the administration’s approach to unaccompanied minors seeking abortions, showing that they go far beyond Doe’s specific experience. For example, ORR temporarily halted a medication abortion for one pregnant minor halfway through the procedure. In another case, ORR suggested that a pregnant minor scheduled for discharge from the shelter not be released until she had been counseled against receiving an abortion.

“I’m in shock at how brazen the federal government is in flouting the Constitution,” Brigitte Amiri, an ACLU attorney leading the case, said last month. “Their briefs and public statements are appalling in terms of disregard for Supreme Court precedent and human rights. Roe v. Wade says the government can’t ban abortion. They are effectively banning abortion for Jane Doe. I am still in shock that this is happening.”

Here are some excerpts from ORR emails filed as part of the case:

1. In the email below, Jonathan White, the deputy director for children’s programs at the Administration for Children and Families, writes about an unaccompanied minor (UC) who is ready to leave the shelter but had previously asked for an abortion. ORR, he writes, had already told the shelter to direct the minors in its care to programs that “should not be supporting abortion services pre or post-release.” He appears to then ask the shelter to confirm that the minor will receive anti-abortion counseling as a condition of her release. “Ask them to clarify that the discharge plan is consistent with that direction,” White writes. “[T]hat will enable us to proceed with next steps for release for the UC.”

2. In this email, from a redacted email address but sent to a number of HHS officials, ORR states that it is requiring shelters to alert ORR before doing anything to facilitate an abortion. This is a departure from Obama administration policy, which only reviewed abortion requests from unaccompanied minors if they were seeking federal funding for the procedure. In addition, ORR requires the shelters to notify the government before allowing a girl to pursue a judicial bypass—the process of petitioning the courts for a judge’s permission to move forward with an abortion without a guardian’s consent.

3. A redacted sender expressed concern about the legality of ORR approving pursuit of judicial bypass, writing, “Isn’t that contrary to state law? My understanding is that the judicial bypass was created specifically so that the young lady does not need approval from her guardian (in our case the Director of ORR) to move forward with a term of pregnancy. Has this policy been vetted by your legal department?”

4. In March, emails show that ORR tried to stop a medication abortion that was already underway. Medication abortions involve taking two separate drugs within 24 hours to 48 hours. In the email below, ORR instructs shelter staff on the ground to not proceed with the second dose in an attempt to halt the abortion.

Ultimately, the minor in this case completed her abortion because she received a judicial bypass.

5. A March 6 memo from ORR director Lloyd and two other officials described a situation in which a minor obtained a judicial bypass to obtain an abortion, but ORR instructed the shelter not to allow it to go forward. It is unclear whether this minor was able to terminate her pregnancy.

These emails provide a window into the policies and resulting actions that the ACLU seeks to halt with this lawsuit.