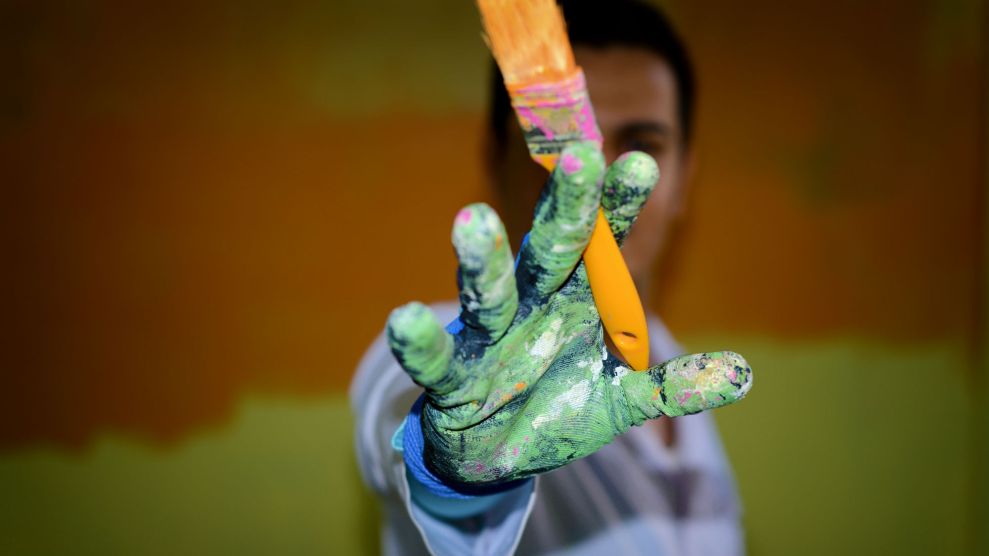 For many Americans, Trump’s first year in the White House has been, in a word, ugly. But the Trump administration has resulted in some of the most provocative political art in American history. “Painting is not made to decorate apartments,” Pablo Picasso famously said in 1945. “It’s an offensive and defensive weapon against the enemy.” Over half a century later, world-famous performance artist Marina Abramovic said, “The function of the artist in a disturbed society is to give awareness of the universe, to ask the right questions, and to elevate the mind.” In the spirit of Picasso and Abramovic, here are our picks of the most memorable works from the Trump Era to date:

Subway Therapy, the creation of artist Matthew “Levee” Chavez, gave New Yorkers space, literally, to express their feelings following the election. Passers-by wrote things like “A better wall,” “Woke up this morning and still can’t believe this world,” and “Never give up.” From November to December, the installation collected nearly 50,000 sticky notes. “It brought people to tears, and I watched the community support each other,” wrote Chavez in a Quartz blog post. “It is important in these times of division, fear, and stress to understand that in the end we are all on the same team.” A selection of the notes was archived by the New-York Historical Society.

"I had apprehensions traveling to the US 6 days after Trump was elected. Mainly because I was afraid I would have to bite my tongue when talking to strangers by the chance they might be a supporter. But when I saw the 'Subway Therapy' plastered on the New York subway walls filled with proclamations of love and support for the minorities who were threatened with this new power I was overwhelmed with comfort that WE are the majority. WE being people who want equality and safety for all. Love is everything. Post it up everywhere! 💝" #throwbackthursday 📷 @jacquie.manning

In early September, French artist JR—a self-described “photograffuer” for his style that marries photography and graffiti—installed a huge, 30-foot portrait of a one-year-old Mexican boy peering over to the American side of the US-Mexico border wall. The artist unveiled the installation the day after Attorney General Jeff Sessions announced the Trump administration’s intent to roll back the DACA program, which has granted protections to more than 800,000 undocumented students living in the US.

Although the work “was not intended as a direct response to the Trump administration” according to an interview with JR by the New York Times, it did make a powerful statement about what it means to grow up in a world with borders. “I wonder, is this kid worrying about what will happen? What does he think?” JR said. “At one year old, you don’t see the frontier or which side is better.”

You just can’t un-see this. In mid-August of last year, five identical nude Trump statues, sans testicles, went up in New York City, Seattle, Cleveland, Los Angeles, and San Francisco. Las Vegas sculptor Ginger was commissioned for the nation-wide installation, titled The Emperor Has No Balls, by anarchist artist group Indecline. Ginger, who creates monsters for haunted houses, in addition to other art, said building the statues wasn’t anything new for him. “Trump is just yet another monster, so it was absolutely in my wheelhouse to be able to create these monstrosities,” he told the Huffington Post.

This new addition to the Castro in San Francisco is getting A LOT of attention- and giggles. pic.twitter.com/zJSKp0bmk6

Magazine covers are their own genre of political art—think the always-relevant covers of The New Yorker, jarring imagery from The Economist, or this recent cover from The Week. “It just seemed crazy at the time that [Trump] was running and that it was actually happening and that he was insulting people,” Barry Blitt, the artist behind several of The New Yorker‘s covers, told Mother Jones earlier this year. “The whole thing seemed circus-like and crazy.” Here are a few covers that captured our attention:

And…one of our of personal favorites: 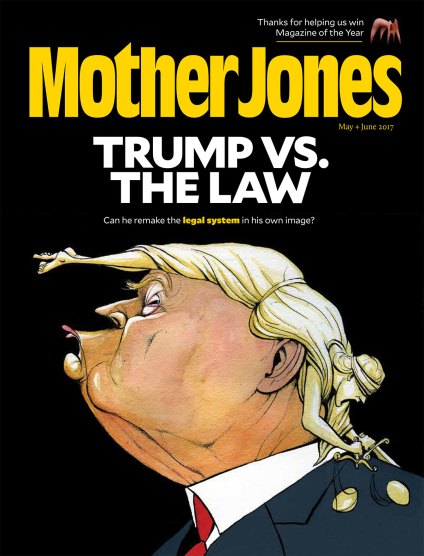 Murals of Trump locking lips with world leaders—Pope Francis, Vladimir Putin, Hillary Clinton, Israeli Prime Minister Benjamin Netanyahu, the Queen, and even himself—have been appearing on streets around the globe since the presidential race. The image is a play on Dmitri Vrubel’s famous 1979 Berlin Wall mural that depicts Soviet president Leonid Brezhnev and East Germany ruler Erich Honecker sharing a passionate kiss. The Trump-Putin mural, initially painted on the side of a restaurant in Lithuania, went viral during Trump’s campaign, during which he was criticized for his “bromantic” relationship with the Russian president.

Mark Bryan’s illustrations have appeared on magazine covers, online, and in galleries throughout California. The 67-year-old artist came of age during the Vietnam War era, and grew critical of the government as a teenager. “When you’re 18 and the government wants to draft you, you get into politics pretty quick,” he tells Mother Jones. Bryan thinks of himself as more of a fine art painter than an editorial cartoonist, but he couldn’t resist featuring Trump in his art. “You don’t have to exaggerate anything; he’s a walking cartoon,” Bryan said.

"Feeding the Baby" the Dark Lord is finally out! If only #Kelly could fire #Trump #Bannon #racism #altright #Nazis #Charlottesville #art pic.twitter.com/cIcZ5Nv7Ec

“I never set out to be a groundbreaking artist, in the sense of doing something that’s never been done before,” Shepard Fairey, the artist famous for creating the Obama campaign’s iconic HOPE poster, told Mother Jones in 2008. “I set out to make stuff that communicated quickly and effectively, playing off of advertising, pop art, and pop culture.” In 2017, Fairey produced a series of protest posters, titled We the People, that depict Latina, Muslim, and African American women in the same style as the HOPE poster. Fairey’s new creations were printed in newspapers and distributed at Trump’s inauguration. “We felt the phrase ‘We the People’ is pretty important,” Fairey told the LA Times in January. “It means everyone.”

On Tuesday night, Aaron Huey (@argonautphoto) and I, with the help of the @amplifierfoundation, launched the “We the People” Kickstarter campaign and we’ve already raised more than $200,000 in just a few short days! I’d like to thank all of you who’ve already pledged and those of you who continue to support and share this amazing effort. I spoke with @newshour by phone Wednesday about “We the People,” the HOPE poster I made in support of Obama’s 2008 campaign, and my thoughts on our current political climate. Take a look (link in bio). #GreaterThanFear image from a photo by @ridzdesign.

Today's #WeThePeople ads in the @nytimes, @washingtonpost, and @usatoday! @amplifierfoundation

8. Trump and the Statue of Liberty

Donald Trump’s words from a 2005 conversation with Billy Bush are the inspiration for illustrations featuring the president groping Lady Liberty and even assaulting her. “A caricature is a portrait. It is an exaggeration,” said Victor Juhasz, the artist known for one of the most famous illustrations of Trump and Lady Liberty (pictured below) and for his Rolling Stone cover art. “But by exaggeration, you might actually be getting closer to the truth.”

Victor Juhasz's illustration for The Fury and Failure of Donald Trump in Rolling Stone, October 2016. pic.twitter.com/zdGzNKxX4J

The Trump Era has already yielded some of the best protest signs—expressing humor, some sarcasm, and rage—in activism history. The Smithsonian’s National Museum of American History, the Bishopsgate Institute in London, and Temple University are some of the organizations collecting signs from modern American protests like the Women’s March and the March for Science.

Voting is over. This is the winner. pic.twitter.com/TaKp6VLWWB

People can’t deal with this cute toddler and her #WomensMarch sign https://t.co/tHveVbLn0v pic.twitter.com/SYjhu8WEM2

After a Republican presidential debate last year, Trump said of moderator Megyn Kelly, “You could see there was blood coming out of her eyes. Blood coming out of her wherever.” Portland-based artist Sarah Levy’s response was her now-famous artwork, Whatever, a portrait of Donald Trump made from the artist’s menstrual blood. “He made the comment about Megyn Kelly and I had the feeling that it needed a response,” Levy tells Mother Jones. “People connected with it really deeply—it was like a collective punch back at Trump.” In late 2016, she sold the painting to the German Military History Museum in Dresden for $3,000, donating the the proceeds to Portland’s VOZ Worker’s Center and the Chicago-based Center for Economic Research and Social Change.