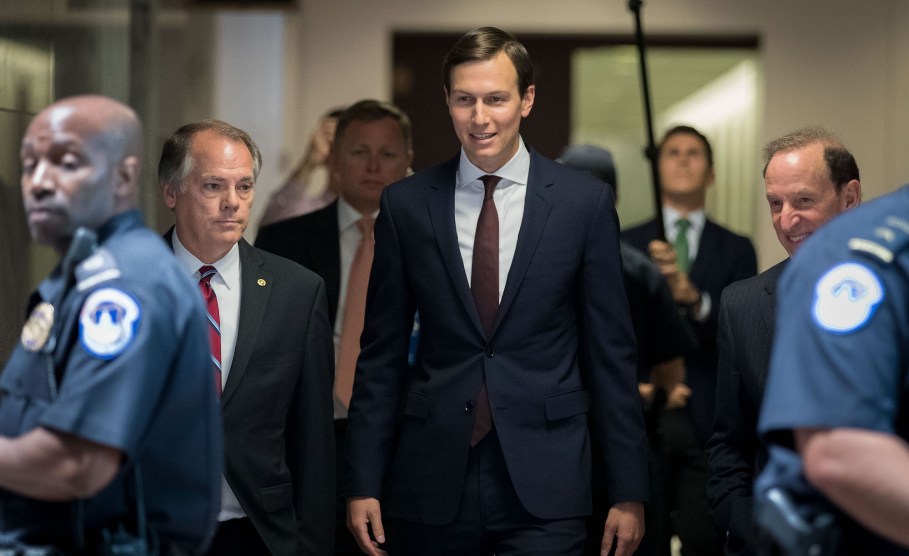 Jared Kushner leaves after testifying at a closed-door hearing before the Senate Intelligence Committee on July 24. Ting Shen/Xinhua via ZUMA Wire

Jared Kushner may have a new problem regarding his testimony in the Trump-Russia scandal. Kushner, President Donald Trump’s son-in-law and senior adviser, told Capitol Hill investigators that he did not know of any contacts between the Trump campaign and WikiLeaks during the 2016 presidential campaign, according to his lawyer Abbe Lowell. But new evidence suggests that Kushner was told of such a contact when Donald Trump Jr. in September 2016 informed Kushner that he had exchanged messages with WikiLeaks.

Earlier this week, The Atlantic broke the news that Trump Jr. had traded several private Twitter messages with WikiLeaks, the organization that the US intelligence community says was in cahoots with Russia to undermine the election to benefit Trump. At the time, Trump Jr. emailed Kushner and other campaign officials to tell them about his communications with WikiLeaks. Kushner, according to The Atlantic, forwarded Trump Jr.’s email to Hope Hicks, a senior campaign aide.

The emails reported by The Atlantic indicate that Kushner was aware at the time of Trump Jr.’s interactions with WikiLeaks and raise the possibility that he misinformed congressional investigators.

In a statement to Mother Jones, Lowell said, “Mr. Kushner was asked if he had contacts with WikiLeaks, [Russian-linked hacker] Guccifer [2.0], or DC Leaks, and said ‘no.’ He also said he did not know of such contacts by the campaign. From all I have now seen, his statement was accurate then, as it is now. In over six hours of voluntary testimony, Mr. Kushner answered all questions put to him and demonstrated that there had not been collusion between the campaign and Russia.”

“It appears that your search may have overlooked several documents,” the senators wrote.

The committees’ interest in Kushner intensified after news stories reported that in June 2016 he—along with Trump Jr. and Paul Manafort, the campaign chairman—met with a Russian emissary who was supposedly bringing them “dirt” on Hillary Clinton. “I did not collude with Russia, nor do I know of anyone else in the campaign who did so,” Kushner said in a public statement prior to his sessions with the intelligence committees. “I had no improper contacts.”

Lawmakers have already contended that Kushner withheld information from Congress. In a September 28 letter reported by CNN, Burr and Warner told Kushner they were “concerned” that he had failed to disclose his use of a private email account despite the panel’s prior request that he turn over emails related to the committee’s probe of Russian interference.

“It appears that your search may have overlooked several documents,” the senators wrote Kushner.

US intelligence agencies concluded that the Russian government used WikiLeaks to disseminate emails stolen from the Democratic National Committee and Clinton’s campaign CEO John Podesta. Trump cited the WikiLeaks disclosures numerous times in the final months of the presidential campaign. Clinton recently told Mother Jones that Russian meddling in the election “was one of the major contributors to the outcome.”