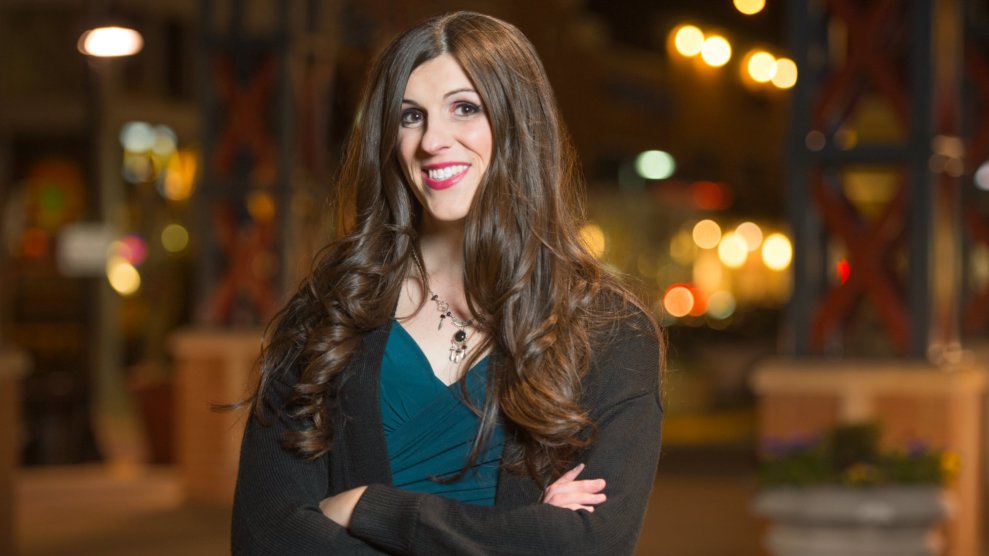 Sitting on a couch in her campaign headquarters in Manassas, Virginia, Danica Roem is quick to mention the “miserable” traffic on nearby Route 28 and how her mother’s commute has only gotten worse over the last thirty years.

A Democratic candidate for a seat in Virginia’s House of Delegates, Roem would be the country’s most powerful openly transgender politician if elected, and the first one to be elected and serve in a statehouse. That fact has made the closely-fought race something of an international media spectacle. With a chuckle, she calls the gridlocked highway, a mainstay of her campaign, “the road I’ve now made world famous.”

Voters in this increasingly suburban Northern Virginia district, she says, don’t care about her gender—they want to know whether she’ll fix the road. Roem says many stories about her run have focused on her being transgender rather than her qualifications for office. As a local watchdog journalist who covered the area for nearly a decade, she boasts she’ll bring “a reporter’s eye to Richmond” along with an intimate understanding of local government.

“Transgender people have really good public policy ideas that span the gamut of transportation policy to health care policy to education policy, and yes, to civil rights as well,” Roem tells me. “We shouldn’t just be pigeonholed into the idea that we’re just going to be fighting about bathrooms.”

While Roem has focused her campaign on brass tacks issues like raising teacher pay and job creation, her Republican opponent has spent 26 years in the statehouse compiling one of the country’s most anti-LGBT records. Delegate Bob Marshall authored Virginia’s 2006 constitutional amendment banning gay marriage. This year Marshall—who’s been labeled “Bigot Bob” by LGBT advocates—introduced legislation that would have barred transgender public school students from using the bathroom that best aligns with their gender and required administrators to inform students’ parents within 24 hours if they ask “to be recognized or treated as the opposite sex.” (Other Republicans killed the bill in committee.)

Marshall has so far fended off Democratic challengers, but political experts in the state expect the race will be close. Northern Virginia has grown to be more diverse and liberal in recent years, and Hillary Clinton won the district by 14 percentage points in 2016.

Quentin Kidd, director of the Wason Center for Public Policy at Christopher Newport University, says Roem’s identity might end up being an asset, if it helps boost Democratic voter turnout. “If Bob Marshall were running against any other Democrat that looked like any other Democrat out there across Virginia, he probably would win,” Kidd tells Mother Jones. “Who she is may be that 3 or 4 or 5 percent increase in vote that pulls her across the finish line.”

Marshall’s refusal to debate Roem may also hurt him, says Kidd. “He’s now faced with a situation where he’s got to stand side by side, face to face with someone who represents everything he disagrees with,” Kidd explains. “I think he’s demonstrated during the course of the campaign that he doesn’t have the spine to do that.”

Marshall, an outspoken lawmaker who journalists say is usually happy to talk, has been tight lipped in commenting on the race or his opponent, even to local reporters who’ve known him for years. (He did not respond to Mother Jones‘ interview requests.)

Meanwhile, Marshall and Virginia’s Republican Party have made Roem’s gender a central issue. In the few interviews he’s done, Marshall has referred to her using male pronouns. A campaign mailer paid for by the state party and approved by Marshall in the final days of the race, also referred to Roem by male pronouns and accused her of wanting to teach kindergartners about “transgenderism,” a term used by opponents of transgender rights.

The American Principles Project, a conservative think tank in Washington, is peddling the same message, running ads claiming the election is about whether schools should be required to “teach kids they can change their gender.” (The attack stems from a contentious segment of a radio interview where Roem and the host sparred over when it would be appropriate to discuss gender identity in schools.)

APP has stood by its claim. “If this was race, you would be a racist for opposing teaching kids about black history month or whatever,” says executive director Terry Schilling. “To say that Danica doesn’t want to teach this in kindergarten classrooms—it’s kind of a self denial.”

Roem says the attacks have backfired on her opponents, by spurring new support from volunteers and donors. “I don’t know if I should put them down as an in kind contribution at the end,” she jokes.

Roem faces a challenge common to openly transgender candidates on the campaign trail, according to Elliot Imse, communications director for the Victory Fund, an organization that’s supporting Roem’s campaign and is dedicated to electing LGBT people to office. “They not only need to explain the issues that they want to run on,” Imse explains, “but they also have to come out as transgender and explain what being transgender means.”

Roem admits her gender has come up occasionally on the campaign trail, but she says most people who have brought it up have been curious, not hostile, and she’s happy to answer their questions. She also released a YouTube ad in September, showing her morning routine of putting on makeup and taking hormone pills, while explaining that she’s transgender: “It shouldn’t be newsworthy or political…this is just who I am.”