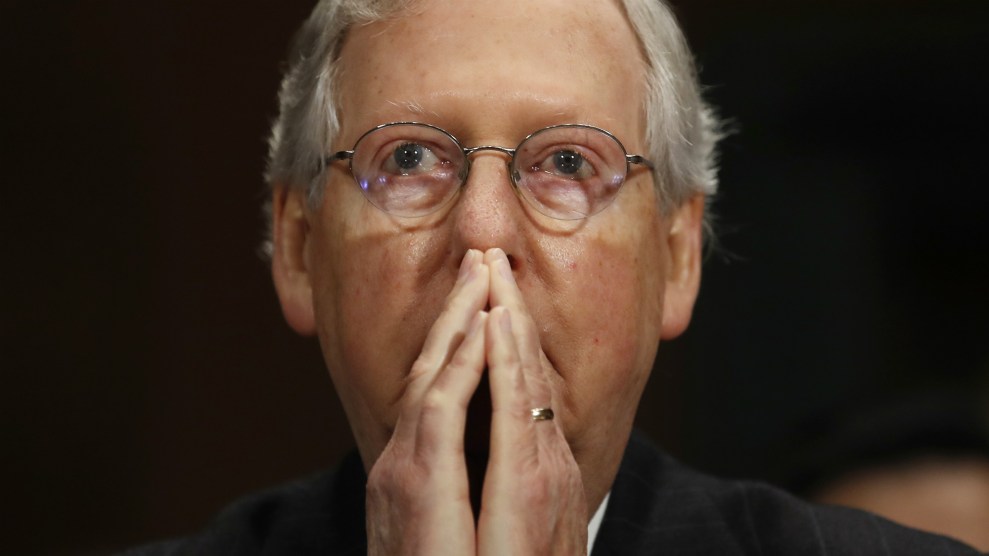 When politicians come knocking on Bill Miller’s door, he usually has big checks to deliver. But lately, Miller, a Republican lobbyist in Austin, Texas, says the major donors he advises on how and when to make their campaign contributions are not taking out their checkbooks. At all.

The reason, Miller says, is the failure of Republicans to accomplish much of anything in Washington, from their whiff on Obamacare to their ongoing wrangling over tax reform. Donors are livid, particularly because Republicans control both chambers of Congress and the White House and have still floundered.

Dan Eberhart, the CEO of Canary, an Arizona-based oil drilling services company, is one of them. Eberhart, who describes himself as “a frustrated GOP establishment donor,” helped bundle donations for several GOP presidential candidates in 2016 and estimates he donated about $200,000 in the last election to campaigns and super-PACs. Much of that, he directed to the Republican Party itself: $70,000 to the Republican National Committee and $15,000 to the National Republican Senatorial Committee, the party’s campaign arm supporting Senate candidates. This year, he’s holding back. He donated $2,500 to the NRSC in September but says he will refrain from more serious donations until he at least sees action on tax reform. A Senate vote on the legislation could come as early as this week.

“I don’t know why donors should give to the NRSC until tax reform is passed,” Eberhart says. “Thanks for [Supreme Court Justice Neil] Gorsuch, but you haven’t otherwise used the majority.”

Donor dissatisfaction has translated into meager Republican fundraising hauls. Monthly fundraising totals for the NRSC, which is closely aligned with the Senate leadership, have dropped steeply. Through the first six months of 2017, the NRSC raised an average of $4.6 million per month. But since July, after the GOP’s effort to repeal Obamacare flopped, it has raised an average of $2.1 million.

The Republican National Committee has fared better but also appears to be suffering. In October, the RNC raised about $9.1 million, far more than the $3.9 million raised by its Democratic equivalent. But it was the committee’s second-lowest month of fundraising this year, making up less than half of what it raised in January, when enthusiasm for President Donald Trump and a GOP-controlled Congress was at its peak.

Eberhart’s ire is targeted at the Senate, but Miller says the anger from donors he knows is wider and deeper—and worse than the numbers reflect. There are too many “black holes,” such as super-PACs and dark-money groups, to fully grasp the scale of the drop-off, he says, but it is significant.

“I just know in my experience, the people I’ve talked to write big checks, and big checks to a lot of different places and a lot of different people, and they’re not writing any checks to anybody—to anyone, anywhere,” he says. “They’re kind of put off generally down the line. They might do some things a little more locally, but the national thing? Nah. Nothing. Flat.”

Fundraising pleas from Republican politicians are falling on deaf ears, Miller says. Donors just want action. And even the passage of a tax bill may not be enough to convince donors to get back on the bandwagon anytime soon.

“The tax bill they’ve got now, it will help, because you’ve done something, and taxes are a big deal to a lot of people,” he says. “Is it a cure? No. It’s a salve.” After he began publicly making critical comments in the press about the GOP-controlled Congress for failing to heed its donors’ wishes, Eberhart says, he got calls from four Republican senators asking him to reconsider. None of them convinced him.

Perhaps more dangerous for Republican leaders is that Stephen Bannon, Trump’s ousted strategist who has declared war on the GOP establishment, has been sidling up to donors, including Eberhart, who says he’s spoken to the Breitbart head numerous times. Eberhart says Bannon hasn’t hit him up for cash yet, but he’s been impressed with Bannon’s vision.

“He has not asked me for money,” Eberhart says. “I am not naive in the sense that I don’t think that’s not coming, but literally when I met with him, he hasn’t seemed that worried about it. He was focused on policy, tax reform, and results.”

The signs are ominous for Republican leaders, Miller says. “If they’re not worried, they’re stupid,” he says. “Or crazy. Or both.”