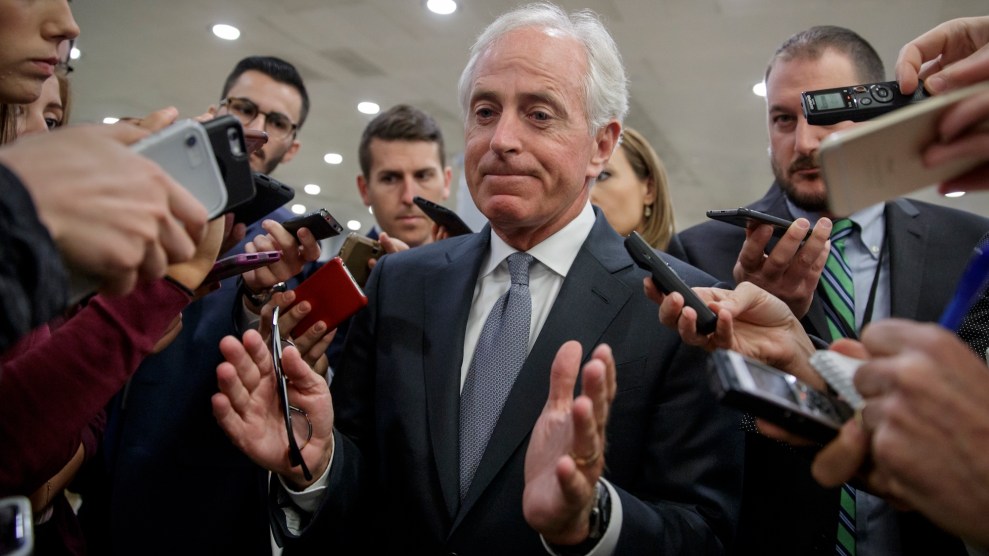 On Tuesday morning, Sen. Bob Corker (R-Tenn.) told CNBC that Americans should automatically pay more taxes if tax cuts don’t create the economic growth Republicans are promising. To do that, Corker wants Republicans to add a trigger to the Senate tax bill that would increase taxes if it doesn’t meet revenue projections. Republicans have said their bill will pay for itself, but economists believe that’s wildly optimistic.

Corker wants his proposed trigger to affect families, not just the businesses that would get the vast majority of Republicans’ $1.4 trillion tax cut. When a CNBC host asked whether the trigger would hit individuals or companies, Corker said, “You’ve got to make sure you’re not doing anything to take away from the certainty that businesses want to do the investments.”

“So, in other words, taxes go up on individuals if the tax cuts to businesses don’t pay off,” the host interjected. “On both,” Corker responded.

Corker wants the backstop because Republicans are passing the biggest tax overhaul in 30 years on a hunch. Normally, Congress’ independent scorekeepers would analyze Republicans’ claim that their tax plan will pay for itself through economic growth. “We’re kind of skipping that process,” Corker said.

Multiple nonpartisan groups have found that the tax bill would not come close to paying for itself. All of the 42 economists recently surveyed by the University of Chicago’s Booth School of Business believe the tax bill will substantially increase the national debt. The Joint Committee on Taxation, Congress’ nonpartisan tax analyst, would likely come to the same conclusion if it had the time to fully examine the bill.

The Senate bill already has a trigger that works in the opposite direction than the idea suggested by Corker. This trigger would give businesses an additional $120 billion in tax breaks if the bill adds more revenue than currently projected. Businesses would still get the money even if the tax bill as a whole adds hundreds of billions in debt, according to David Kamin, a tax law professor at New York University. Kamin told the Washington Post that the provision is “a one-sided bet, a one-sided giveaway to business.”

Corker, who has been one of the President’s sharpest critics, told CNBC that he “would be thrilled” to take all of the individual cuts “directly to the incinerator,” and presumably replace them with something else. He added that he was “willing to swallow” the individual provisions to cut taxes for businesses.

Corker has previously said he will oppose the tax bill if it adds “one penny to the deficit.” Including a trigger that raises taxes on individuals would give him a way to get out of that promise.