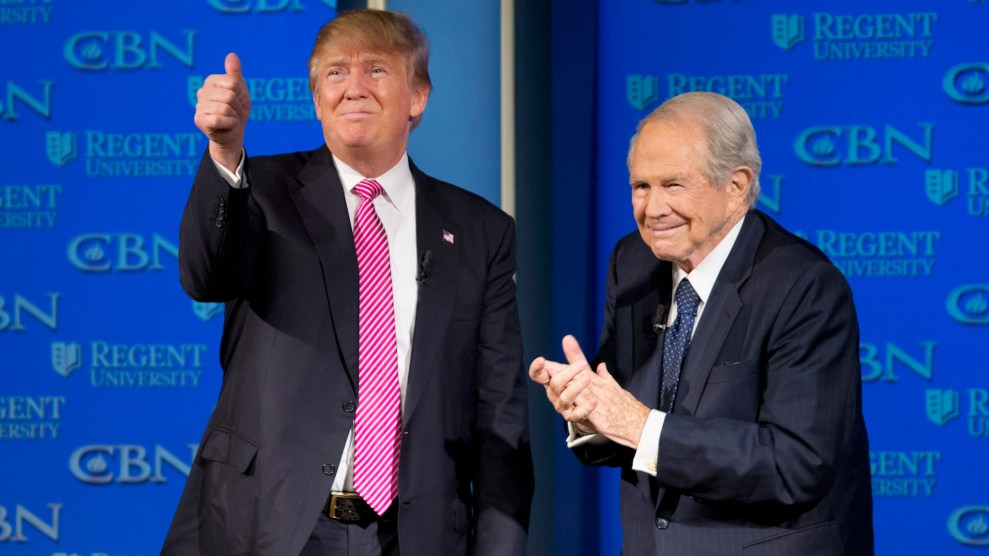 Donald Trump with right-wing preacher Pat Robertson in Virginia during the 2016 campaign. Under the House tax bill, Robertson's nonprofit could endorse political candidates for the first time since 1954.Steve Helber/AP

Fetuses don’t file 1040s in April, but they still appear in both Republican tax bills. The reason is simple: giving corporations a massive tax cut is great; doing that while advancing the culture war is even better.

“Unborn children” are not the only ones who are singled out in one, or both, of the House and Senate tax bills. Tucked in amid changes to tax rates are provisions that target undocumented immigrants, preachers, and graduate students. It doesn’t take too much familiarity with Republicans’ priorities to guess whether each of those groups wins or loses.

Overall, the provisions are largely incidental to saving or spending money in the Republicans’ $1.5 trillion tax cut, though they do manage to add significant complexity to the tax code. Taken together, the changes show how Republicans are using tax reform to push through long-standing priorities that would be difficult to pass as standalone bills. Below is how four groups would be helped or hurt by the Tax Cuts and Jobs Act.

Under current law, parents can open a tax-advantaged college-savings account, known as a 529, to help their kids pay for college. Both the House and Senate tax bills specify that “unborn children” can be declared the beneficiary of a 529 plan. The bills define an unborn child as a “child in utero,” or a “member of the species homo sapiens, at any stage of development, who is carried in the womb.”

From a tax perspective, the change is completely unnecessary. Parents can already open a 529 in their own name and transfer the benefits to future children. Rep. Diana DeGette (D-Colo.) has said the provision is simply “a back-door attempt to establish personhood from the moment of conception.” There is some federal precedent for giving rights to fetuses, but this would be the first use of the tax code to promote fetal personhood.

Under the current tax code, parents can get a $1,000-per-child tax credit for any children who live in the United States. The House tax bill would require kids to have a Social Security number to be eligible for the credit. As a result, roughly 1 million children, who are overwhelmingly undocumented, would no longer be eligible for the CTC.

Attorney General Jeff Sessions has been one of the main critics of undocumented parents’ ability to claim the CTC. In April, Sessions said billions of dollars of “excess” CTC payments to “mostly Mexicans” could be used to help pay for President Donald Trump’s border wall. Instead, the $20 billion of savings over 10 years would now be used to offset corporate tax cuts.

As long as churches and nonprofits don’t explicitly endorse politicians, they can already say just about anything without jeopardizing their tax-exempt status. The House bill would remove that one limit to let nonprofits endorse politicians for the first time since 1954. As a result, billionaires like the Koch brothers would be able to get millions in tax breaks for their political contributions.

Watchdog groups warn that it could easily become the next Citizens United, the 2010 Supreme Court decision that opened the door to unlimited corporate political spending. Numbers from the nonpartisan Joint Committee on Taxation suggest the change could lead to $2 billion of tax-deductible political spending per year being routed through nonprofits. Aside from a few conservative Christian groups, hardly any religious leaders or charities support the proposal.

Doctoral students who work as teaching or research assistants often get free tuition along with their salary so they can afford to get a Ph.D. Undergrads like resident assistants who work for their school can also get some or all of their tuition waived. Today, only the salary is considered taxable income. So if a university waives $40,000 of tuition and pays an extra $30,000 to cover living expenses, the student only pays taxes on $30,000 of income. The House bill would tax all $70,000 by treating tuition waivers as income. As a result, roughly 145,000 graduate students, as well 27,000 undergraduates, would end up paying more taxes—in some cases by more than $6,500 per year.

The House bill would also block people from deducting interest on their students loans. The attack isn’t just on students, though. Both bills would impose a 1.4 percent excise tax on about 70 schools whose endowments exceed $250,000 per student.

The shift comes as conservatives‘ support for higher education wanes. Over the past two years, the share of Republicans and Republican-leaning independents who believe colleges and universities have a negative impact on the United States has jumped from 37 percent to 58 percent, according to a June poll from the Pew Research Center. Jason Delisle, a fellow at the conservative American Enterprise Institute, told the Washington Post the proposals reflect increased suspicion of “elite institutions” among Republicans. “It’s a class warfare thing,” he said.