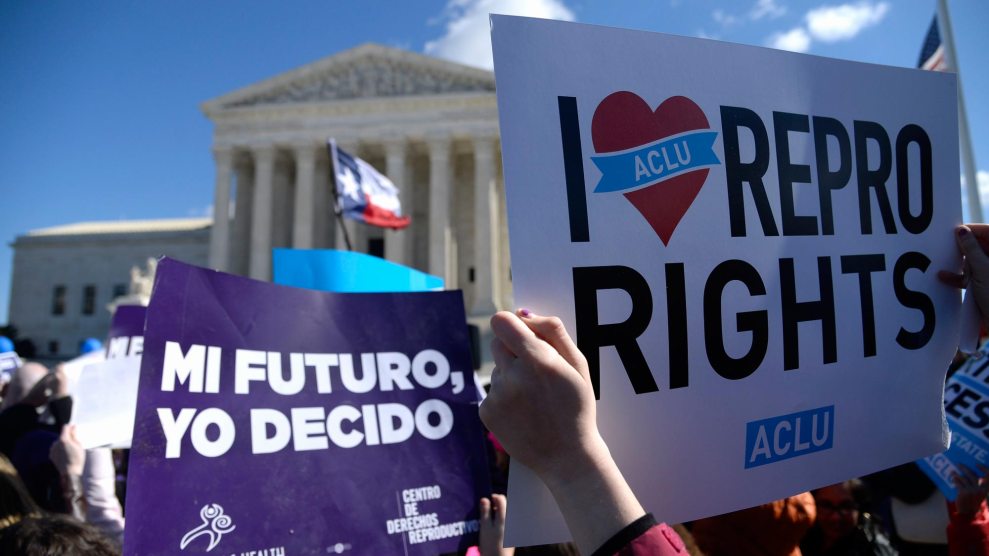 On Wednesday morning, a House committee held a hearing on a bill that would make abortions illegal as early as six weeks into a pregnancy—a point at which many women do not yet know they are pregnant.

The bill, titled “The Heartbeat Protection Act” would make it a crime, punishable by up to five years in prison, for doctors to perform abortions after they can detect a fetal heartbeat, which is usually at about six weeks. According to Centers for Disease Control Data, only 38 percent of abortions happen before or at the six week mark. “Republican’s latest ban would prevent women from accessing abortion at six weeks of pregnancy—before many of us even know we are pregnant,” said Ilyse Hogue, the president of NARAL.

The bill provides no exceptions for pregnancies resulting from rape or incest, or for pregnancies that threaten a woman’s health. The only exception contained in the bill is if an abortion is necessary to save a pregnant woman’s life.

Rep. Steve King (R-Iowa) sponsored the bill, and started the hearing with an opening statement in which he made clear that he intends this bill to be the first step in setting up a Supreme Court legal challenge to Roe v. Wade, the 1973 decision that legalized abortion nationwide. “President Trump will hopefully appoint one or two more justices to the Supreme Court, making this a profound moment in the pro-life movement,” King said. “President Trump is actively changing the makeup of our judicial system with strong conservative nominees who would hear arguments about this bill while it is being challenged on the way to the Supreme Court.”

This reflects the bill’s origins. King’s federal version of the bill is modeled after a similar heartbeat bill passed by the Ohio state legislature in December 2016, which was vetoed by Republican Gov. John Kasich, who called it “clearly contrary” to Supreme Court precedent on abortion. The Ohio bill’s original author, anti-abortion activist Janet Porter, has pushed the bill for years specifically because it is designed to be “the arrow in the heart of Roe v Wade.”

The bill has virtually no chance of becoming law, as it would be unlikely to gather enough votes were it to make it to the Senate. But, in another move mimicking the bill’s journey in Ohio, Republicans’ support of this bill might be an effort to make their 20-week abortion ban—which passed the House earlier this month—look moderate in comparison. In Ohio, Kasich signed into law a 20-week ban at the same time that he vetoed the six-week “heartbeat” bill. A federal 20-week ban could itself serve as a challenge to Roe, which allows for abortion until a fetus is viable outside of the womb, a point that is usually between 22 and 24 weeks of pregnancy.

During Wednesday’s hearing, Democrats on the committee pointed out concerns that the bill directly contradicts Roe. Rep. Pramila Jayapal (D-Wash.), the only female representative to speak on the panel, noted that the bill has “no viability in the courts.” Rep. Jamie Raskin (D-Md.) asked David Forte, a law professor at Cleveland State University who supports the heartbeat bill, if Congress has, in any other case, knowingly passed legislation known to be unconstitutional. Forte argued that it had, referencing a decision by Congress to outlaw slavery in the territories after the Supreme Court’s decision in Dred Scott.

Forte also argued that the Supreme Court has regularly reviewed new scientific evidence to change its mind on past decisions. The high court, he argued, should consider medical evidence that shows that fetuses with a heartbeat have a 95 percent chance of surviving until birth. Forte also suggested that fetal heartbeat detection is easier to assess than viability at about the end of the second trimester.

Raskin later questioned one of the other witnesses, Dr. Kathi Aultman of the anti-abortion Charlotte Lozier Institute, about her own transformation from pro-choice to anti-abortion. At the hearing, Aultman said she had performed abortions at the start of her career as a physician, but stopped after she had a child of our own and began to feel regret. “I am a mass murderer,” she said.

In an unusual moment partway through the hearing, King pointed to a woman in the front row and introduced her as Mackenzie Miller “in the red dress with the black sweater.” Mackenzie, he said, is pregnant with “little Lincoln Glen Miller” and had an ultrasound earlier that morning, performed by a tech sitting to her right, on an ultrasound machine that was placed on the chair to Miller’s left.

House Republicans saved a front-row seat in the hearing on an abortion ban for … a sonogram. #NoAbortionBan pic.twitter.com/02dfHcJVan

King then proceeded to show both video and audio of Miller’s ultrasound on a screen at the front of the hearing room. The fetus pictured was far beyond six weeks gestation, and King periodically narrated what was happening on the screen: “There’s a good shot of him. Looks like Rocky at the top of the steps,” King said. “Suck your thumb, ok” King continued, then seemingly began to narrate the fetus’s thoughts: “That thumb is good, but I can’t wait to be born and see what this world is like out here.”