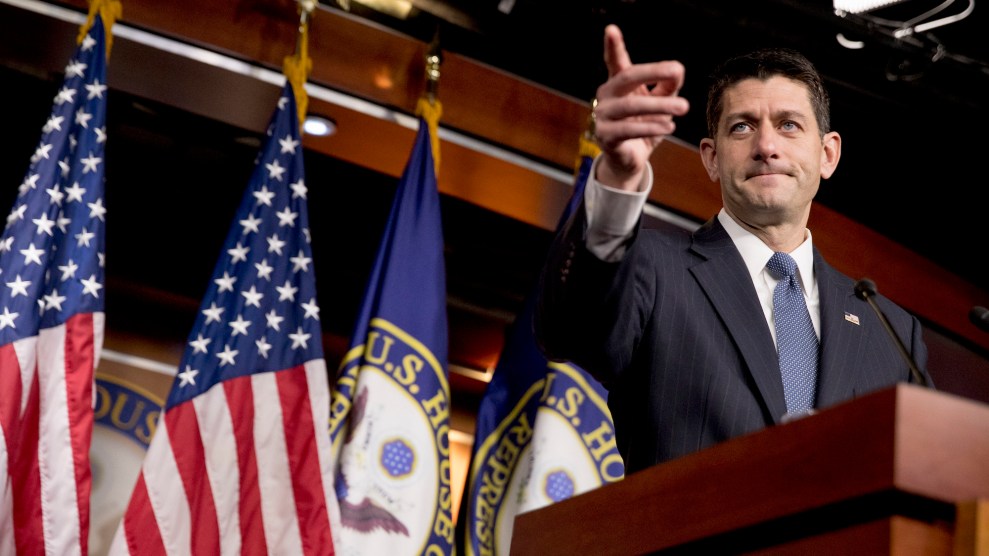 Republicans in Congress finally released their tax cut plan on Thursday. The details of the 429-page bill will take days to decipher. But the overall aim remains clear: President Donald Trump and Republicans are prioritizing a massive corporate tax cut that will disproportionately benefit the wealthiest Americans. Those cuts will be paid for by $1.5 trillion of deficit-spending over the next 10 years.

The Tax Cuts and Jobs Act released on Thursday mostly sticks to the framework that Republicans released in September. The corporate tax rate would fall from 35 percent to 20 percent, while almost all individuals would now be grouped into to three tax brackets of 12 percent, 25 percent, and 35 percent. Households that make more than $1 million would pay the top rate of 39.6 percent.

Republicans’ September proposal was vague about which loopholes would be closed to offset their tax cuts. On Thursday, House Republicans made clear that they plan to eliminate many popular deductions. Among those changes are deductions for medical expenses and student-loan interest, as well as a tax credit for adoption, the Wall Street Journal reports. For new home purchases, the deduction for mortgage interest would be limited to loans under $500,000, down from $1 million today.

Republicans hope to discourage people from itemizing deductions in the first place by increasing the standard deduction. The TPC estimates that about 5 percent of families would itemize their deductions under Trump’s framework, compared with 26 percent today. As Mother Jones has reported, Republicans claim that they are doubling the standard deduction, but that is highly misleading because their plan eliminates personal exemptions that are worth $4,050 per household member.

Some of the changes that Republicans had considered did not end up in the final bill. As Trump demanded, there will be no major changes to 401(k) plans. After a backlash from blue-state Republicans, the bill includes a deduction for up to $10,000 of property taxes, while still getting rid of deduction for income and sales taxes. That compromise is less significant than it sounds. Only 2 percent of state tax revenues come from property taxes, according to the left-leaning Center on Budget and Policy Priorities. Completely repealing the state and local deduction would lead to taxes going up for 1 in six Americans, according to the left-leaning Institute on Taxation and Economic Policy. In a high-tax state like Maryland, nearly 1 in 3 households would see their taxes increase.

For individuals, there would be four tax brackets instead of the current seven brackets. The lowest tax rate would climb from 10 percent to 12 percent, while the top rate would remain at 39.6 percent. The increase in the bottom rate would be offset by a larger share of income being taxed at 12 percent, rather than 15 percent, along with a $600 increase to the Child Tax Credit. The top bracket would only apply to households that make more than $1 million per year, compared with $470,000 today.

The biggest gifts to the wealthiest Americans on the individual side come from eliminating the estate tax and the Alternative Minimum Tax, which helps ensures that wealthy people don’t use loopholes to reduce their tax liability to next to nothing. In 2005, the AMT increased Trump’s effective tax rate from 4 percent to 24 percent, a $31 million difference. The estate tax only impacts the wealthiest 0.2 percent of Americans, because the share of inheritances below $11 million for couples is exempted. The Republican bill would immediately double that threshold and by 2024 it would be entirely repealed. Getting rid of the estate tax would be a massive gift to Trump’s children and other heirs.

As expected, most of the cuts are on the corporate side of the tax code. The corporate tax rate would fall from 35 to 20 percent, while business owners whose profits are taxed as individual income—known as pass-through companies—would see their top tax rate drop from 39.6 percent to 25 percent. Those two provisions alone would cost about $2.7 trillion over the next decade, according to the TPC.

The Republican bill attempts to stop top-earners, such as lawyers, from reclassifying themselves as pass-through companies by implementing “guardrails,” such as excluding professional service companies. In doing so, the bill adds significant complexity to the tax code, despite Republicans’ stated aim of making it simpler to pay taxes. In September, Seth Hanlon, a tax expert at the liberal Center for American Progress, told Mother Jones that stopping wealthy Americans from abusing the expanded pass-through loophole would be impossible to achieve in practice.

The budget resolution passed by the House last week allows Congress to increase deficit-spending by $1.5 trillion over the next 10 years. The TPC has estimated that Republicans initial cuts would cost $900 billion more than that. Republicans are using what nonpartisan groups like the Committee for a Responsible Federal Budget considers gimmicky and deceptive accounting to mask tax cuts that are likely to cost more than their $1.5 trillion limit.

The bill, for example, proposes a new $300 tax credit for adult dependents, such as college students. But the credit would expire after five years. When that deadline approaches, there will be pressure to extend it again or make it permanent—further increasing the cost of the cuts. The corporate tax cut, on the other hand, would not expire.