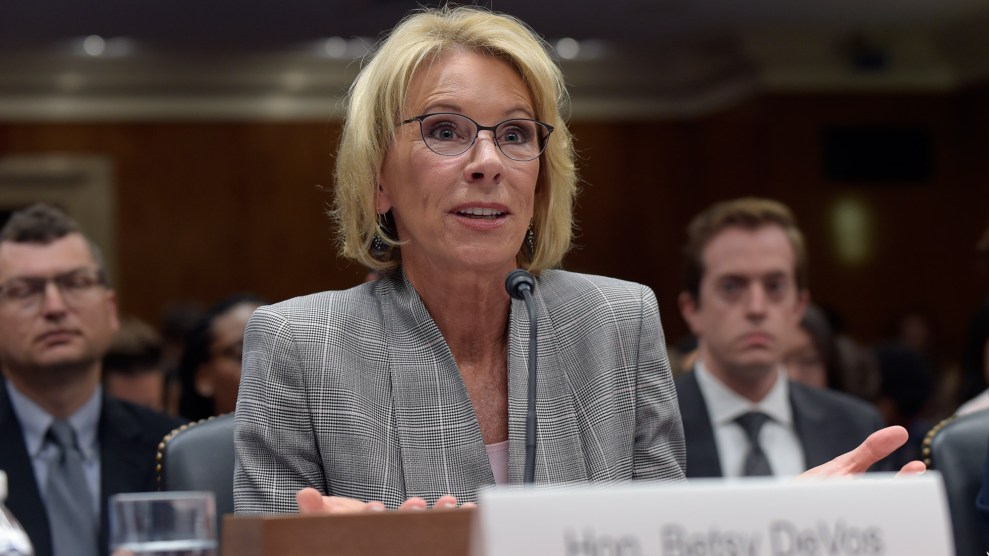 For-profit college magnates Corinthian Colleges and ITT Technical Institute shuttered operations in recent years after facing state and federal investigations into fraudulent and predatory practices. After the school chains closed, tens of thousands of students who borrowed money to attend them found themselves with worthless diplomas and saddled in debt. The Department of Education under President Barack Obama made it easier for students to submit “borrower defense claims” to try and recoup the funds. By January 2017, the administration announced it had granted more than $650 million in relief to roughly 28,000 Corinthian and 6,300 ITT students.

Since Donald Trump took office, the approval of such claims has ground to a halt, according to a new Senate report of Education Department data released Tuesday. In 10 months, the Trump administration has yet to approve a single claim.

Most of the claims came from borrowers who went to for-profit colleges. More than 52,000 claims alone came from students who attended either Corinthian College or ITT.

Between December 2015 and January 2017, 31,773 borrower defense claims had been approved under the Obama administration, the report found. According to the most recent data collected in July, none have been granted under Trump. The Department of Education has not responded to a request for comment.

Established in the mid-1990s, the “borrower defense to repayment” rule is meant to clear federal loan debt for students who attend colleges that engaged in illegal or deceptive practices. Last October, the Obama administration finalized changes to the rule meant to streamline the claims process and allow batches of students like former Corinthian attendees to seek a wider debt relief.

But in June, weeks before the Obama-era changes were set to go into effect, Education Secretary Betsy DeVos announced the department would delay them. DeVos said the rule created a “muddled process that’s unfair to students and schools and puts taxpayers on the hook for significant costs.”

In July, attorneys generals in 18 states and the District of Columbia sued the Education Department for violating federal law in delaying the regulation’s implementation. DeVos drew criticism from consumer advocates and lawmakers when, at a conference in Michigan, she said that under the borrower defense system under Obama, “all one had to do was raise his or her hands to be entitled to so-called free money.”

In a Federal Register notice in late October, the department again proposed delaying implementation of the new rule, this time until July 2019. This week, an Education Department-created committee convened to attempt to rewrite the Obama-era loan protections.

The Senate Democrats’ report, drafted by Sens. Elizabeth Warren of Massachusetts and Dick Durbin of Illinois, called on the Education Department to forego a plan reportedly under consideration by department officials that would partially relieve debt for loan borrowers. The report also calls on the Education Department to immediately process borrower defense claims, provide widespread automatic relief for Corinthian students, and stop collections on borrowers that have defaulted on their loans.

“The widespread fraud committed by Corinthian Colleges and ITT Tech wreaked havoc on the lives of tens of thousands of students nationwide, leaving them with high levels of debt, poor job prospects, useless degrees and credentials, and in many cases no degree at all,” Sen. Durbin wrote in a statement. “We can’t leave these students holding the bag.”