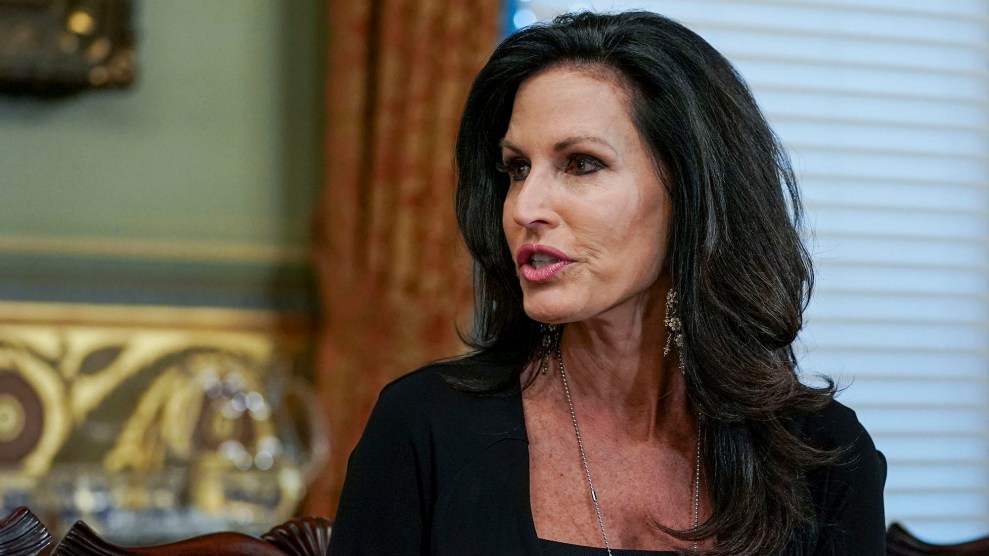 Penny Nance with Concerned Women for America speaks during a meeting held by Budget Director Mick Mulvaney in the Eisenhower Executive Office Building on the White House complex on May 25, 2017. Andrew Harnik/AP

It’s hard to imagine a more ironic choice for America’s next ambassador-at-large for women’s issues.

The position is tasked with overseeing State Department programs to end gender-based violence and empower women and girls around the world. So, naturally, President Donald Trump is reportedly considering Penny Young Nance, a far-right Christian activist who opposed reauthorization of the Violence Against Women Act; recently cheered on an attempt to block a pregnant teen immigrant from an abortion; and has called on Hollywood to write more scripts featuring strong male leads.

Nance is the CEO and president of Concerned Women for America. The group’s agenda, according to its website, includes “protecting and supporting the Biblical design of marriage,” “protecting the sanctity of human life,” “ending sexual exploitation by fighting all forms of pornography, obscenity, prostitution, and sex trafficking,” and “defending religious liberty.”

Speaking on Fox & Friends, Nance put it this way: “We’re the women’s group who love men.”

At the CWA, Nance has called to defund Planned Parenthood and promoted the false idea that abortion is linked with breast cancer. Her organization argued that transgender kids shouldn’t have the right to use school bathrooms matching their gender identity, and it opposed a federal bill that would ban workplace discrimination on the basis of sexual orientation or gender identity.

Nance has even taken aim at the Disney mega-hit Frozen, which featured two strong female princesses. Nance went on television to criticize the film’s portrayal of men. “Hollywood in general has often sent the message that men are superfluous, that they’re stupid, that they’re in the way,” she said on Fox & Friends.

Congressional aides told Politico last week that the Trump administration was considering Nance for the envoy position, but it’s not clear whether she would be able to get confirmed. Democrats are expected to push hard against the appointment and she recently criticized Republican Sens. Bob Corker and Jeff Flake for their decisions to retire from Congress—both senators sit on the Foreign Relations Committee, which approves or rejects ambassador nominees.

When Flake, a vocal Trump critic, announced his retirement by saying “there may not be a place for a Republican like me in the current Republican climate,” Nance tweeted that he “sounded like a middle school girl.”

Republicans have only a narrow majority on the Foreign Relations Committee, so if either Corker or Flake joins Democrats in opposing Nance, her bid for the job will fail.