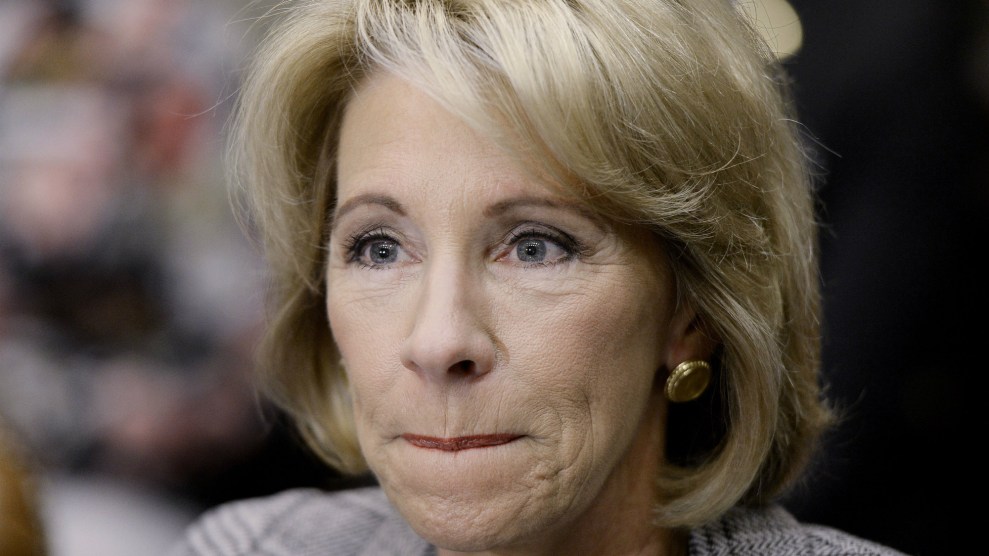 On Tuesday night, the longstanding fight over a controversial voucher program in Douglas County, Colorado, appeared to have come to an end. In a local school board election that has found its way into the national debate over voucher programs, four anti-voucher candidates—Chris Schor, Kevin Leung, Anthony Graziano, and Krista Holtzmann—defeated reform-supporting candidates in a landslide.

The election was the culmination of a battle that goes back to 2009, when a group of conservative reform-minded candidates took full control of the school board in Douglas County—one of the wealthiest counties in the country, with a school district made up of 67,000 students. As Politico has put it, the county “has gone further than any district in the nation to reshape public education into a competitive, free-market enterprise.” Since 2009, the board has successfully ended a collective bargaining agreement with the local teachers union and enacted a “pay for performance” salary system for teachers.

Douglas County “has gone further than any district in the nation to reshape public education into a competitive, free-market enterprise.”

Its most controversial move, though, came in 2011, when it approved a sweeping school voucher program that aimed to give up to 500 students publicly-funded scholarships to attend participating private schools. The county’s voucher program was the first district-created program in the country. Ninety-three percent of the pilot class of scholarship recipients enrolled in religious schools, according to court documents. It sparked outcry from those who argued that it was a diversion of public money away from public schools. Over the next few years, the suburban district in many ways become a model for conservatives looking to reform education nationwide and the group of reform-minded board members received support from national right-wing groups like the Koch brothers’ Americans for Prosperity.

This backing helped those board members secure all seven seats for six years. But in 2015, frustrated by the board’s direction, challengers running against the reforms of then-superintendent Elizabeth Celania-Fagen convincingly defeated three incumbents, resulting in a 4-3 split on the board. While conservative members remained in charge, their power over the board was significantly weakened.

Complicating matters was an ongoing, high-profile legal battle over the voucher program. Not long after the board initially approved the program in 2011, a judge halted its implementation, ruling that it violated the state constitution because taxpayer money was being sent to private and religious schools. In 2013, the Colorado Supreme Court concurred in a 4-3 decision. District officials appealed to the US Supreme Court, with an eye on challenging the constitutionality of Colorado’s so-called “Blaine Amendment,” a state provision that blocks public dollars from going toward religious institutions. 37 states have similar provisions.

Earlier this year, the US Supreme Court sent the Douglas County case back to the Colorado Supreme Court in light of a Missouri case it recently ruled on; in that similar case, the Supreme Court ruled that Missouri violated the constitution when it stopped a church from getting state funding to repave its playground. The court’s decision emboldened supporters of the voucher program in Douglas County. School board president Meghann Silverthorn told the Denver Post in June, “it’s our hope that a decision now by the Colorado Supreme Court will allow us to put kids into the conversation about the best way to deliver the best education possible for them.”

But the ruling also energized the other side of the aisle and yet again put Douglas County’s November election under a national microscope. While the four incumbent voucher-supporting board members opted not to run for re-election, including Silverthorn, who was term-limited, the race saw a deluge of campaign spending from Democrats and teachers unions looking to secure the seats, as well as from Republican donors looking to prop up new candidates.

School board races across Colardo this year drew more than $1.5 million in political contributions.

The Denver Post reported in October that the American Federation of Teachers, the nation’s second-largest teachers union, poured $300,000 into the race to a committee supporting the anti-voucher candidates from the slate known as CommUnity. Meanwhile, the Koch-backed Americans for Prosperity spent thousands of dollars on a “social welfare” campaign to promote school choice across Colorado, and a Republican-backed political committee contributed $200,000 in favor of the reform candidates in the county, the Denver Post reported. School board races across the entire state this year drew more than $1.5 million in political contributions, according to education news site Chalkbeat Colorado.

Then Tuesday night saw anti-reform candidates decisively take all seven seats—four new members and three incumbents. Now the entire board is expected to be united in opposition to the voucher program and seems poised to drop the legal fight to implement it.

An end to the case would serve as a setback for those who were counting on the Douglas County case to be the way that the Supreme Court could invalidate Blaine Amendments across the country. The state-level provisions have been long seen as a barrier to including religious schools in voucher programs, which Education Secretary Betsy DeVos has vocally supported in the past. After the narrowly-ruled Missouri case, DeVos lauded the Supreme Court’s decision: “We should all celebrate the fact that programs designed to help students will no longer be discriminated against by the government based solely on religious affiliation.”

“All of our Douglas County public school students are the winners tonight,” Holtzmann said in an election-night statement, according to the Douglas County News-Press. “Students at every school, students at every grade level and students with varying needs, all of them won tonight because our schools can now continue the return to excellence that began two years ago, after it became clear that reform had failed our children.”