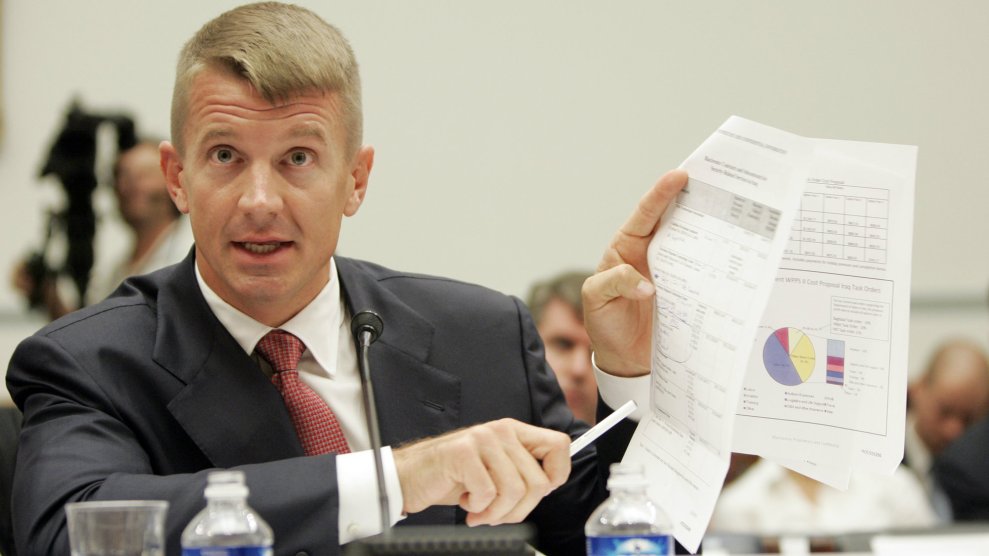 When Erik Prince, the founder of the notorious Blackwater security firm, heads into a private meeting with staffers and members of the House Intelligence Committee on Thursday, the No. 1 topic will be a secret trip he made in January to the Seychelles islands to huddle with a Russian close to Vladimir Putin. According to the Washington Post, the rendezvous was arranged by the United Arab Emirates, where Prince moved in 2010 and formed a mercenary army for the regime, and this get-together was part of an attempt to set up a back-channel communication between Putin and Donald Trump, then the president-elect. The visit has drawn the attention of the FBI, which has been investigating contacts between Trump associates and Russia, but a Prince spokesman last April claimed the “the meeting had nothing to do with President Trump.”

There is much congressional investigators can ask Prince about. He has had a long, controversial career buckraking in the dark corners of the national security world. The brother of Betsy DeVos, Trump’s education secretary, Prince has been an avid cheerleader for Trump (donating $250,000 to help elect him), an informal postelection adviser for Trump, and a pal of Stephen Bannon. Jared Kushner, Trump’s son-in-law, and Bannon recruited Prince earlier this year to draft a plan that would replace US troops in Afghanistan with for-profit mercenaries—supplied, of course, by a military contractor like Prince. (The Pentagon said no thank you.) But perhaps the most important thing for Intelligence Committee members and staffers to keep in mind, as they try to pry information from Prince, is this: Prince is a fabricator.

During the election, the usually media-averse ex-Navy SEAL was a regular contributor to Breitbart News, the Bannon-backed far-right outlet, defending Trump and promoting conspiratorial swill.

On October 7, 2016, WikiLeaks began posting emails stolen from John Podesta, the Clinton campaign’s chairman. Earlier that day, the US intelligence community issued a statement declaring the Russian government was behind the hack-and-dumps targeting Democrats during the election. It noted that the posting of the stolen emails by WikiLeaks and Guccifer 2.0 [an online persona named after a real-life Romanian hacker who went by the name of Guccifer] was “consistent with the methods and motivations of Russian-directed efforts.” The statement also pointed a finger at Putin, asserting “only Russia’s senior-most officials could have authorized these activities.” Yet Prince joined Trump and his crew in denying there was any Russian connection to the hacking aimed at Democrats.

On the Breitbart radio show, he insisted the Podesta caper had nothing to do with Russian intelligence. He added, “The fact is, a Romanian hacker, Guccifer, is the guy who hacked the Clinton Foundation a few years ago. That guy is in prison. Before he went to prison, all of Sidney Blumenthal—Hillary’s adviser on Libya—all his emails were removed from Guccifer’s server, and those too have been leaking out. John Podesta’s emails, I can assure you, did not come from the Russians.” Prince was conflating a 2013 hack against a Clinton friend (Blumenthal) with the 2016 cyberattack on Podesta. Subsequent cyber-sleuthing has confirmed that Podesta was targeted and successfully spear-phished as part of a massive assault mounted by Russian military intelligence. Yet in the heat of the presidential campaign, Prince was pushing pro-Trump (and Putin-helping) disinformation.

In the same interview, Prince hyped one of the right wing’s favorite anti-Clinton conspiracy theories. He claimed that Hillary Clinton had been complicit in “selling 20 percent of the United States’ uranium supply to a Russian state company.” And he went on: “I think the Clinton Foundation got a very nice spiff off of that, of $25 or $50 million,” meaning a pay-to-play payment. Prince was referring to what has now become the Uranium One scandal, which is not really a scandal. The transaction he referenced involved the acquisition of 20 percent of production capability, not the full supply, and there is no evidence that Clinton had any role in the US government approval process for this deal.

On an earlier Breitbart broadcast, Prince claimed that “due to a significant donation into the Clinton Foundation, the State Department ended up approving the sale of a company that owns 20 percent of the uranium in the United States, certainly a strategic fuel stock for us here, for nuclear energy production, and of course for nuclear weapons, if necessary. It’s now in the hands of a Russian state enterprise.” He was wrong here, too. The deal was approved not by the State Department, but by representatives of nine different federal agencies who sat on an interagency review board; there was no proven connection between a Clinton Foundation donation and the decision, and the uranium in question was not suitable for nuclear weapons.

During the campaign, the Clinton-gave-uranium-to-the-Russians-for-a-foundation-payoff tale was being enthusiastically peddled by Trump (who still has not let go of this faux scandal)—even though this accusation was fully debunked. And since the election, Republicans and conservatives have tried to use the Uranium One deal to deflect attention from the Trump-Russia scandal. Prince has been a loyal foot-soldier in this reality-bending, anti-Clinton propaganda effort.

Prince has gone even further in fueling the anti-Clinton fevers on the right. During a Breitbart radio appearance four days before the election, Prince, citing a “well-placed source” in the New York Police Department, said that emails discovered on the laptop of Anthony Weiner, the disgraced former congressman then separated from Huma Abedin, a top Clinton aide, included evidence of Clinton perversion and criminality: “They found State Department emails. They found a lot of other really damning criminal information, including money laundering, including the fact that Hillary went to this sex island with convicted pedophile Jeffrey Epstein. Bill Clinton went there more than 20 times. Hillary Clinton went there at least six times.” He maintained these emails held proof “of criminal activity by Hillary, by her immediate circle, and even by other Democratic members of Congress.” He claimed that Abedin had “flipped.” If Clinton were to be elected, Prince warned, there would be a “constitutional crisis.”

Prince’s unsubstantiated comments were quickly embraced by far-right extremists pushing the particularly crazy Pizzagate conspiracy theory that claimed Clinton and Podesta were part of a covert pedophilia ring operating out of the basement of a Washington pizzeria. That day, conspiracy con-man Alex Jones, citing Prince’s interview, exclaimed, “When I think about all the children Hillary Clinton has personally murdered and chopped up and raped . . . yeah, you heard me right. Hillary Clinton has personally murdered children.” And WikiLeaks tweeted, “Astounding claims from Erik Prince, founder of Blackwater on Clinton & NYPD.” (A month later, a man armed with guns entered the pizzeria to investigate Pizzagate and fired several shots, harming no one, before he was arrested.)

Prince, once mostly known for owning a company that employed private military contractors who committed a 2007 massacre in downtown Baghdad, has become a fabulist who has used his national security credentials to dress up and legitimize the most outlandish and paranoid fantasies of the far right. (He also has recently considered challenging Republican Sen. John Barrasso of Wyoming as part of Bannon’s war on so-called establishment Republicans.) No matter what Prince says when he’s sitting before the interrogators of the House Intelligence Committee, they ought to remember this valuable guideline: consider the source.