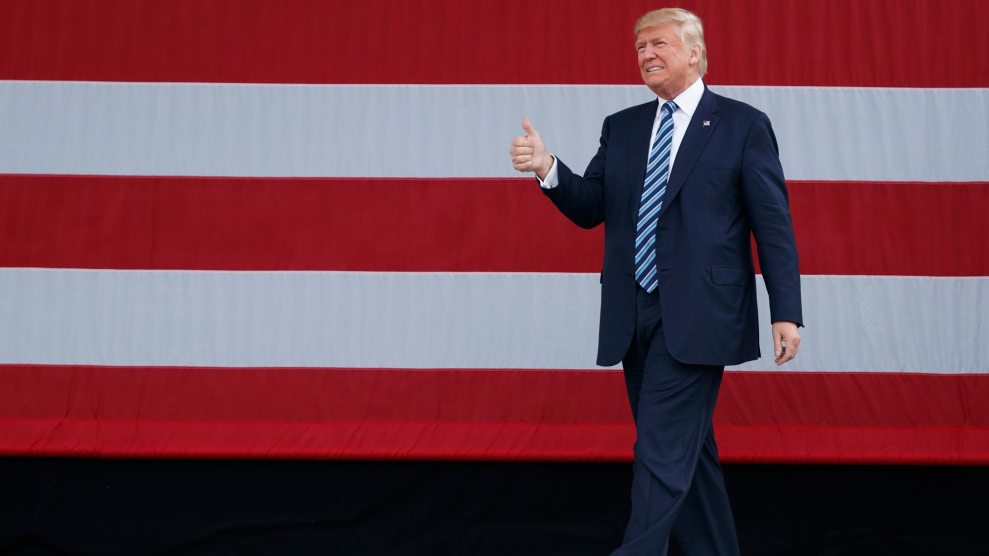 After the Washington Post published a leaked tape in October 2016 showing Donald Trump speaking to Billy Bush of Access Hollywood, describing groping and kissing women without their consent, the Trump campaign saw falling poll numbers and a mass exodus of support from horrified Republicans. Trump responded to the onslaught of criticism by saying that what he described was just “locker room talk”—not a description of something he’d ever actually done.

Within less than a week, the New York Times published the accounts of two women who alleged that Trump had done precisely what he’d so lewdly described on tape—groped and kissed them without consent. Other accounts poured out, and at a time when some 17 women had gone public with tales of unwanted sexual touching or inappropriate behavior by Trump, the candidate gave a speech denying their accusations. By Election Day, several new accusers had come forward, but Trump’s polling had rebounded, and he managed to consolidate enough Republican support to eke out an Electoral College victory.

In February 2019, Trump faced the first new allegation since coming to office, when a former campaign worker said he had kissed her without consent. In June 2019, Trump faced another jarring allegation, this time of rape from journalist and advice columnist E. Jean Carroll. Then, in October 2019, another woman named Karen Johnson came forward with an allegation that Trump groped and forcibly kissed her at a New Year’s Eve party in the early 2000s.

Here is a complete list of the now 23 women who have come forward under their own names to accuse the president of sexual assault, unwanted touching or kissing, or other inappropriate sexual behavior.

“He probably doesn’t want me telling the story about that time he continually grabbed my ass and invited me to his hotel room,” one woman wrote.
“Who do you complain to?” another woman said. “He owns the pageant.”

The question remains as to why the allegations made by women before the Access Hollywood tape’s release—like those of Jill Harth or Temple Taggart—didn’t receive far broader attention when they first surfaced. The Guardian reporter who first recounted Harth’s story in July told the Columbia Journalism Review that the lack of initial attention may stem from a common pattern in sexual assault allegations: Few people pay attention to women’s stories until a man’s voice affirms them. “Trump came out in leaked video and said, in so many words, that sexual assault is something that he does regularly,” she said. “It wasn’t any woman saying it; it was a powerful man running for president saying it that got people to take it seriously, which is remarkable.”

This article was originally published on October 15, 2016, and has since been revised as recently as October 2019 to include new information and accusers.