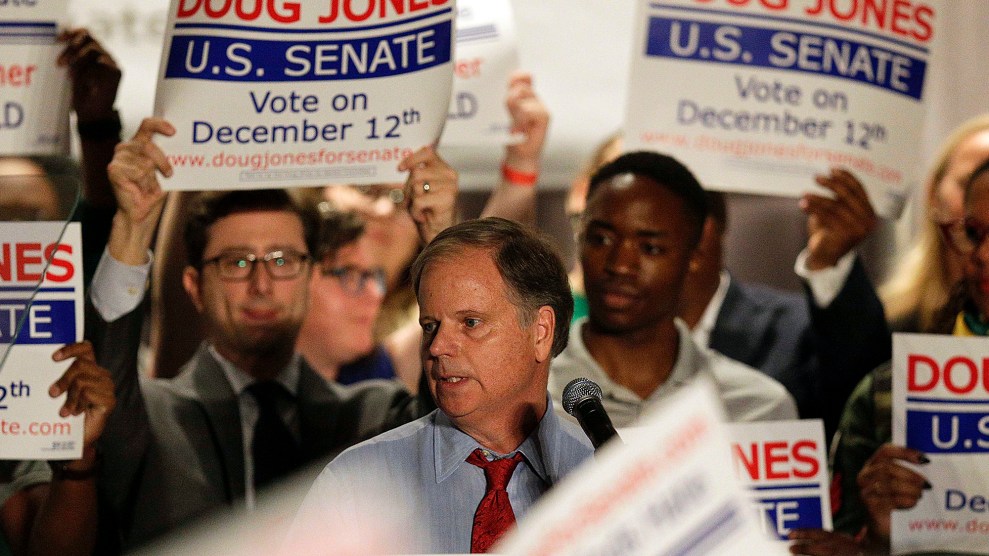 For Democrat Doug Jones to win Alabama’s special Senate election next week, he will need overwhelming support from African American voters, the core Democratic constituency in the deeply conservative state. A decade ago, Jones could have relied on a number of black political organizations to mobilize African American voters. But these once-powerful groups have declined as the state has voted more and more Republican, and now they may be unable to push Jones over the finish line.

African Americans are key to any Democrat’s success in Alabama, where party identification breaks down along racial lines. They make up 27 percent of Alabama’s population but a far larger share of the state’s Democratic voters: CNN, which did not conduct exit polling in the state last year, found in 2012 that 95 percent of black Alabama voters had cast ballots for Barack Obama, versus 15 percent of white voters. In that race, African Americans made up 28 percent of the Alabama electorate, and pollsters believe Jones will need them to be at least a quarter of the electorate to have a chance at beating Republican Roy Moore on December 12.

Most recent polls in the state show Moore with a small lead over Jones, erasing the modest deficit he faced after multiple women came forward to share their stories of being pursued, molested, and assaulted by Moore when they were in high school and Moore was a district attorney. A Moore win with low African American turnout would shine a harsh light on the Alabama Democratic Party and the African American groups that failed to turn out the vote for Jones. Wayne Flynt, an Alabama historian and professor emeritus at Auburn University, calls the election “an incredible test case” for whether these organizations can still mobilize voters for the rare viable Democratic candidate. And if they can’t, he says, it might be time to replace or reinvent them.

The same goes for the state’s lackluster Democratic Party apparatus, says John Archibald, a columnist for the Birmingham News and AL.com. “It very well could be the nail in the coffin of the [Alabama] Democratic Party,” he says, “and a rebirth.”

Historically, several black political groups have played a large role in getting black voters to the polls, allowing the Democratic candidates themselves to devote their resources to television ads and other aspects of their campaigns. The Alabama Democratic Conference is the oldest of these groups. In the 1980s, the New South Coalition was created as a rival group, but in later years the two organizations functioned in concert, with different strengths in different regions of the state. A third group, the Jefferson County Citizens Coalition, became the most powerful black political organization around Birmingham, the state’s biggest city and home to its largest African American population.

The South has shifted from a Democratic stronghold to a Republican one over the last 50 years, and with that shift the political power of African Americans across the region has declined. As the GOP took full control of state government and all statewide elected offices in the last decade, Flynt says, the state Democratic Party became moribund, more concerned with patronage than political organization. And as Alabama Democrats lost power, the money that used to flow to Democrats and their allies has slowed. “In the past, there’s always been this influx of money from trial lawyers, from gambling interests, from [the Alabama] State Employees Association, from various traditional Democratic groups,” says Flynt. “Most of those traditional Democratic groups now either have greatly reduced influence or they have begun to shift toward sharing money with Republicans.”

The major black political groups remain involved in local races, where their endorsements can still go a long way. But “in terms of a very high-profile statewide race, it’s been several election cycles since there was a high degree of activity,” says Zac McCrary, a Democratic pollster in Montgomery, who still believes the groups can help Jones by providing “an existing infrastructure and architecture for Democrats to utilize.”

“They used to be a necessary part of the coalition that a Democrat would put together to win in Alabama,” says David Mowery, a political consultant in Montgomery. “Now I don’t know if they have the organization or the money anymore to turn their voters out like they used to.”

“I haven’t seen any of these groups working for Jones,” Earl Hilliard, a former Democratic congressman from the Birmingham area and a member of the Jefferson County Citizen Coalition, said last week. He wasn’t sure why he hadn’t seen his own group out there with leaflets and yard signs, as it typically would be before an election. “This hasn’t been done,” he said. “So I am expecting, first of all, a very poor turnout in the African American community.” (On Monday, Hilliard said he did see the Alabama Democratic Conference and another newer group handing out flyers at his church the day before.)

Joe Reed, the longtime leader of the Alabama Democratic Conference, says the group’s work is kicking into gear in the final week before the election. The group printed about 400,000 flyers to distribute around the state, including in churches and other public places. And it will be back in church next Sunday to remind people to vote. The conference will also begin airing radio ads later this week encouraging people to vote.

“Money is tighter than it used to be,” Reed acknowledges, adding that special elections are especially difficult to raise money and mobilize voters for. “Overall, we’re just all working trying to get the vote out.” He declined to answer questions about the strength of his organization.

John Zippert, president of the New South Coalition, says Republicans in the state Legislature have made fundraising harder by banning a type of political donation that black political groups relied on. He also believes the decision to schedule the special election in December, as opposed to the usual time in early November, was intended to depress turnout. But Zippert denies that these changes have weakened his group. “My answer to this is that we’re gonna work as hard as we can in the eight days that are remaining here to have a significant turnout of black voters in the Black Belt,” he says, referring to the swath of the South with a historically large black rural population, “and in the urban areas, and we feel that that has not been counted by the political observers or some of these polls.”

The head of the Jefferson County Citizens Coalition could not be reached for comment.

Running statewide in Alabama as a Democrat is a delicate balancing act between energizing the largely African American base and trying to win over Republican-leaning white voters. Jones has campaigned in rural counties with large black populations and is targeting African Americans on social media and with phone calls. But like Jon Ossoff, a Democrat who lost a special election for a House of Representatives seat in neighboring Georgia earlier this year, Jones has focused a lot of his campaign’s war chest on television ads aimed at winning over white voters.

“I think he has decided quite obviously that he also needs a lot of female conservative Christian suburban voters, and he is targeting that audience quite well by his TV ads,” says Flynt, noting the barrage of ads the Jones campaign has been able to run in the state thanks to its prodigious fundraising. “But I just don’t see any comparable effort on the ground to mobilize blacks to the polls.” The Jones campaign did not respond to a request for comment.

The Jones campaign’s lackluster outreach to African Americans, compounded by the atrophied organizations he needs to turn out African American voters, could prove fatal to his campaign. In ads and on social media, Jones introduced himself to African American voters as the man who prosecuted the Ku Klux Klan members who killed four young black girls in the 1963 bombing of the 16th St. Baptist Church in Birmingham. But according to Edward Bowser, a black resident of Birmingham and former columnist at AL.com, that opening message never gave way to a discussion of the issues important to his community. Bowser says he will vote for Jones, but the messaging from the campaign has made him more apathetic about the race. He believes it has had the same effect on other black voters who see themselves as taken for granted.

“Jones’ campaign has done such a poor job speaking to the black community that my passion has fizzled. Severely,” Bowser wrote on Facebook last week. “I appreciate what Doug Jones did in prosecuting KKK members. But when that’s the one and only message of black interest coming from your campaign, it shows an extreme disconnect.”

In October, before allegations that Moore had preyed on minors, Jones released a campaign ad in which he described the Civil War as “two sides believing so strongly in their cause that they were willing to die for it.” He ended the ad by saying he’ll work with others in Washington because “there is honor in compromise and civility.” The ad did not go over well with African Americans who saw it as creating a moral equivalence between the Union and the Confederacy. It didn’t help that it was released the same day White House Chief of Staff John Kelly stated that the Civil War was the result of a failure to compromise.

“If the guy who prosecuted the 16th St. Baptist Church bombers can’t motivate black voters to come to the polls,” says Archibald, “then he’s got a problem.”