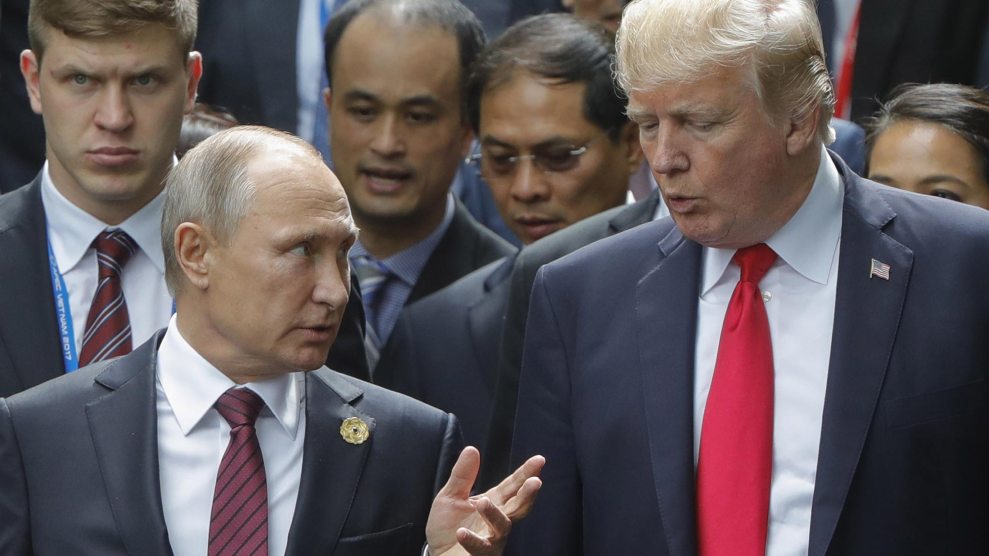 This was a high-intensity year for politics—the inauguration of an unexpected and polarizing president, the installation of a new Supreme Court justice, Republican efforts to undo Obama’s legislative achievements, capped by a massive, hasty, tax overhaul in December.

But during this turbulent year in Washington, the Trump-Russia investigation has been a constant, with Special Counsel Robert Mueller and a number of congressional committees examining both Russian election interference and possible collusion between the Trump campaign and the Kremlin. As the investigation has dragged on, there have been dramatic moments and the disclosure of remarkable documents: The Trump-Russia dossier compiled by former British intelligence operative Christopher Steele; then-FBI director James Comey’s meticulous notes recording his meetings with the president; Trump’s subsequent firing of Comey; Donald Trump Jr.’s emails with a Russian pop star’s publicist; and, let’s not forget, Comey’s remark after the president’s tweet suggesting he had recorded their White House conversations: “Lordy, I hope there are tapes.”

On January 1, 2017, key elements of the scandal were already coming into focus. Since then, new developments—sometimes several—have surfaced every week. To really dive into the weeds, take a look at our massive Trump-Russia timeline, but for a year-end review of the five biggest revelations, read on.

1. Trump has repeatedly undermined and questioned the Russia investigation, while continuing to take actions that benefit the Kremlin.

Allegations that the campaign colluded with Russia have been met by vehement denials from the Trump administration.

I win an election easily, a great "movement" is verified, and crooked opponents try to belittle our victory with FAKE NEWS. A sorry state!

Intelligence agencies should never have allowed this fake news to "leak" into the public. One last shot at me.Are we living in Nazi Germany?

Trump has fired—or threatened to fire—several people who may be connected to the Russia investigation. After ousting FBI director James Comey, Trump belittled attorney general Jeff Sessions over his decision to recuse himself and did not rule out replacing him. Rumors have also swirled that the president is considering firing special counsel Robert Mueller.

But the Trump administration’s efforts to characterize the probe as unfair and misguided have only encouraged the perception of a cozy presidential relationship with the Kremlin. In a May 2017 Oval Office meeting, Trump revealed highly classified information about a sensitive Israeli intelligence operation to Russian foreign minister Sergei Lavrov and ambassador Sergey Kislyak.

“The delay calls into question the Trump administration’s commitment to the sanctions bill,” they wrote. “They’ve had plenty of time to get their act together.”

In September, Facebook disclosed that it had accepted about $100,000 from pages controlled by Russian bots to display 3,000 ads on the platform during and after the 2016 election cycle. The company linked the ads to 470 fake accounts and said that some of them traced back to the Internet Research Agency, a Kremlin-linked tech firm based in St. Petersburg that specializes in spreading pro-Kremlin messages in the West.

In mid-October, the respected Russian business newspaper RBC published a bombshell investigation about the IRA, detailing their extensive work to influence the 2016 US election. They found that the “troll factory” spent some $2.3 million meddling in the 2016 elections, paying the salaries of 90 “US desk” employees in St. Petersburg, Russia, to wage social media disinformation campaigns in America. RBC identified 118 accounts on Facebook, Twitter, and Instagram linked to the agency, that had been used to post more than 1,000 pieces of content a week in September 2016, the height of the US election season. The reach? Up to 30 million people.

A few weeks later, executives from Facebook, Twitter, and Google testified before the House and Senate intelligence committees about Russian misinformation spread on their platforms. The testimony revealed that the scope of influence from Russian government-backed bots was larger than anyone had imagined: Facebook acknowledged more than 126 million US users may have seen the 80,000 incendiary posts created by the IRA between 2015 and 2017. Twitter told Congress that 30,000 Russia-linked accounts generated 1.4 million tweets during the final two months of the campaign. In a rare moment of bipartisan agreement, legislators on both sides of the aisle rebuked the companies. “I’m trying to get us down from La-La Land here,” Sen. John Kennedy (R-LA) said, pressing Facebook about their ability to police advertisers. “You don’t have the ability to know who every one of those advertisers is, do you?”

“I don’t think you get it,” Sen. Dianne Feinstein (D-Calif.) said at the Senate Intelligence Committee hearing with the tech companies. “What we’re talking about is the beginning of cyberwarfare.”

3. A June 2016 meeting at Trump Tower provides the first piece of evidence pointing to possible collusion between the Trump campaign and Russia.

Within days, Donald Trump Jr. released a statement corroborating the Times‘ reporting, and also published emails he received from Rob Goldstone—a music publicist for Russian pop star Emin Agalarov—promising Trump Jr. harmful intelligence about Hillary Clinton. (Emin and his father Aras Agalarov were among Trump’s partners in bringing Miss Universe to Moscow in 2013.) The emails show that Goldstone wrote to Trump Jr. to say that Russia’s crown prosecutor had told the Aras Agalarov that he possessed “official documents and information that would incriminate Hillary” and that the information “is obviously very high level and sensitive information but is part of Russia and its government’s support for Mr. Trump.”

4. Attorney General Jeff Sessions, who served as a Trump campaign surrogate, has repeatedly made false statements about his own contacts with Russia during the election, and about those of others in the campaign.

During his January confirmation hearings to become Trump’s attorney general, former Alabama senator Jeff Sessions was asked explicitly if he’d been in touch with Russian officials during the campaign. “I did not have communications with the Russians,” he replied. But just two months later, the Washington Post reported that Sessions did not disclose that he had met with Sergey Kislyak, the Russian ambassador in July and September of 2016. The news that Sessions had withheld this information led to his recusal from the Russia investigation.

The revelations of Sessions’s false statements did not end there: In June, the Washington Post reported on a third previously undisclosed meeting between Sessions and Kislyak, this one in April of 2016. Throughout, Sessions claimed that his meetings with Kislyak were in his capacity as a senator, and therefore not campaign-related. But this summer, reports revealed that Kislyak had told his superiors in Moscow that he and Sessions discussed a number of campaign-related matters, including Trump’s position on policy issues important to the Kremlin—directly contradicting Sessions’s claims. In October, when he was questioned by the Senate Judiciary Committee, Sessions changed his tune, saying it was “possible” that he and Kislyak had discussed Trump’s positions.

During his confirmation hearings, Sessions also said he was not aware of communications between any members of the Trump campaign and Russian officials. But later that month, Mueller’s team released documents related to the guilty plea of lying to government officials by former campaign foreign policy adviser George Papadopolous.

Papadopolous told prosecutors that in a March 2016 meeting with Sessions, Trump, and other Trump advisers, he informed them that he had connections who “could help arrange a meeting between then-candidate Trump and President Putin.” In November, former Trump foreign policy adviser, Carter Page, told the House Intelligence Committee that he, too, had briefly spoken with Jeff Sessions about his July 2016 trip to Russia. During that trip, Page gave a speech at an institute in Moscow criticizing US sanctions against Russia, kicking off the FBI’s investigation into the Trump campaign’s ties to Russia.

5. Trump’s campaign chairman Paul Manafort had extensive, lucrative ties to Russia—and he lied about them. A lot.

In October, Special Counsel Mueller unveiled a 12-count indictment of Trump’s former campaign chairman, Paul Manafort. During the election, Manafort’s longstanding lobbying on behalf of pro-Russian forces in Ukraine—and the multi-million dollar paychecks he received for it—attracted negative attention and spurred his resignation from Trump’s campaign. Mueller’s indictment of Manafort put these business dealings under a financial crimes microscope. The indictment alleged that Manafort, along with his longtime associate Rick Gates, earned tens of millions of dollars in eastern Europe, and then laundered the money to evade taxes. Along the way, Manafort and Gates lied to a slew of government agencies—the Treasury Department, the IRS, and the Justice Department—as well as banks and financial institutions. Manafort and Gates “repeatedly provided false information to financial bookkeepers, tax accountants and legal counsel, among others,” the indictment said.

My colleague Dan Friedman summed it up well:

Manafort for years told his tax preparer that he had no authority over foreign bank accounts, prosecutors say. In fact, he and Gates controlled at least 15 foreign entities, the indictment alleges. Gates also lied to the Treasury Department when he failed to disclose foreign accounts he set up abroad, prosecutors say. In addition, the two men, as recently as February 10, 2017, allegedly lied to the DOJ by claiming they did not conduct outreach in the United States. Manafort and Gates face charges for making “materially false, fictitious, and fraudulent” statements to the Justice Department and tax evasion charges for lying to the IRS.

President Trump has told friends and advisers that the Russia probe will wrap up in early 2018. But if last year’s raft of major revelations foreshadow what’s to come, that seems unlikely.

“I would be shocked if [Mueller] was done with the White House inner circle,” Ron Hosko, a former assistant FBI director, told USA Today. “All of these indictments, guilty pleas and interviews could be just round one.”