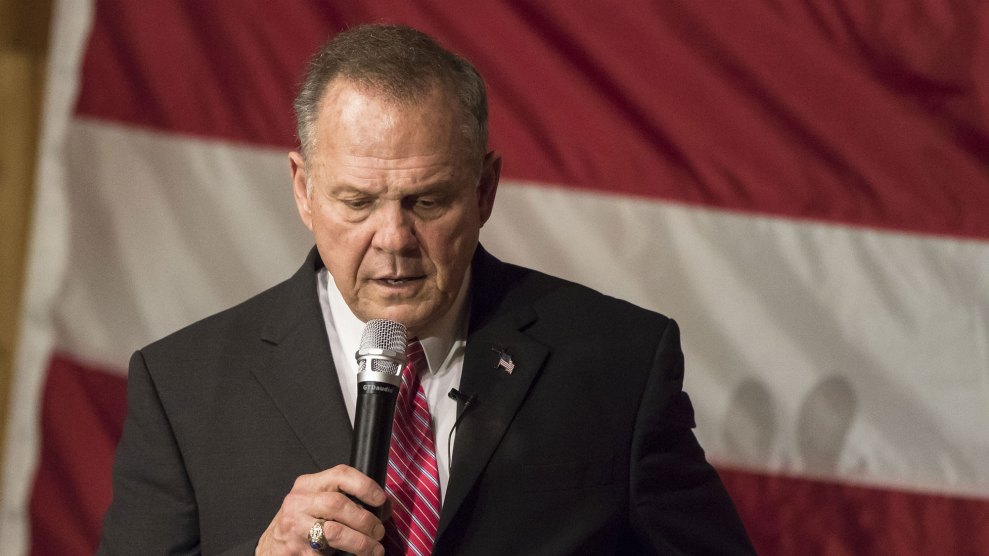 When a candidate is credibly accused of molesting a 14-year-old girl, it tends to block out just about everything else. But Alabama Republican Senate candidate Roy Moore has some preposterous views about politics too. Moore has said that Muslims should not be allowed to serve in Congress and that homosexuality should be illegal. At a campaign rally in Florence, Alabama, in September—the same rally where he referred to American Indians and Asian-Americans as “reds” and “yellows”—Republican Senate candidate Roy Moore praised America under the institution of slavery.

According to a Los Angeles Times report the next day:

In response to a question from one of the only African Americans in the audience—who asked when Moore thought America was last “great”—Moore acknowledged the nation’s history of racial divisions, but said: “I think it was great at the time when families were united—even though we had slavery—they cared for one another…. Our families were strong, our country had a direction.”

The idea that America’s families were strongest during slavery is, for lack of a better word, horrific. The institution of slavery was built on tearing apart families. Parents were separated from their children. Husbands were separated from their wives. Plantation owners, such as the third president of the United States, routinely raped their enslaved workers. Excepting the centuries-long genocide of American Indians (or “reds,” in the parlance of the Republican nominee for US Senate), slavery was the greatest attack on American families the country has ever seen. As Eric Foner recounts in his epic history of Reconstruction, after the end of the Civil War the roads of the South were filled with black men wandering in search of the families that had been taken from them:

Only a broken view of society that excludes people of color from the calculus entirely and makes accommodations for mass rape could possibly consider the society of slavery a time when families were “strong.” This never got much attention because, well, you know. But I’m not sure what prospect would be more troubling—that Moore understands the depravity of his argument, or that he doesn’t.