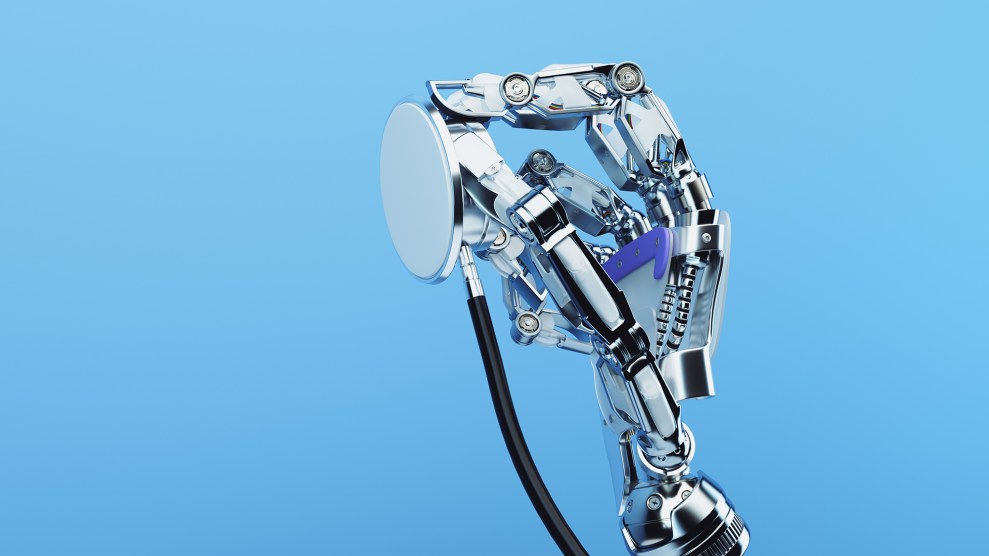 If you haven’t lost your job to a computer yet, you probably will. Experts predict that robots will be folding laundry for us in the next five years, driving trucks in the next 10, and performing surgery in the next 40. And, they predict, they’ll be doing it better than humans. This could lead to a massive shift in our economy, setting off an “era of mass joblessness and mass poverty,” as Mother Jones‘ Kevin Drum recently reported.

But what if technology being able to perform tasks better than humans also meant we’d be saving more lives? A new study suggests that reality is already here. In an international competition between 23 teams from Harvard, MIT, the University of South Florida, and other universities, health institutions, and labs, researchers battled to build self-learning algorithms able to successfully identify metastases, or cancerous growths, in images of lymph node tissue from breast cancer patients. Overall, 32 algorithms were entered in the competition. Each was given 270 practice images to learn from before the competition, and in late 2016, they were put to the test with a series of brand-new images.

In a true competition of human vs. machine, 15 out of 32 algorithms did a better job of identifying the presence of cancer than a panel of certified doctors did.

“This study is the first to show that AI can outperform expert pathologists in the interpretation of pathology images,” the study’s lead author, Babak Bejnordi, a researcher at Radboud University in the Netherlands, tells Mother Jones, adding that it offers “a great opportunity for clinicians to make more accurate and definitive personalized diagnosis.”

The results of the competition are outlined in a study published Tuesday in the Journal of the American Medical Association. The 32 algorithms and 11 pathologists were given the same 129 lymph node images to “look at,” with 49 of the images depicting a cancerous growth. To mimic a real medical scenario, doctors were given two hours to analyze the images and identify potentially cancerous growths which ranged from 0.2 mm to a few millimeters in size. The pathologists correctly identified, on average, 62.8 percent of the images with cancer, with the winning algorithm—from a team of researchers from Harvard and MIT—coming it at near perfect accuracy.

The computers, though, were significantly slower than the humans—at least for now. The doctors took between 72 and 180 minutes to analyze all the slides, while the algorithms took about 30 minutes to an hour per slide, according to Bejnordi. As technology progresses, however, Bejnordi expects to see “a large boost in computation speed.”

The authors point out several limitations of this study, a major one being that it was a simulation, and that doctors, in practice, are often given several images of the same region to detect cancerous growth. In this scenario, they were only given one image per region. Also, the pathologists mostly missed growths less than 2 millimeters, or “micrometastases,” which don’t pose a significant risk to breast cancer patients. Still, when it comes to cancer detection, one small error could cost a life.

Perhaps it’s no surprise, but robots and other smart technology are already saving lives in other ways, too. Scientists are building robots capable of rescuing natural disaster victims. This app can detect someone’s suicide risk based on their tone of voice. We’ve even built algorithms that are helping detect human trafficking websites. So in the end, while we may all lose our jobs to computers—pretty soon, you could be reading an article that’s about robots, written by a robot!—there’s still plenty to celebrate about artificial intelligence, and cancer-detection may just be the beginning.