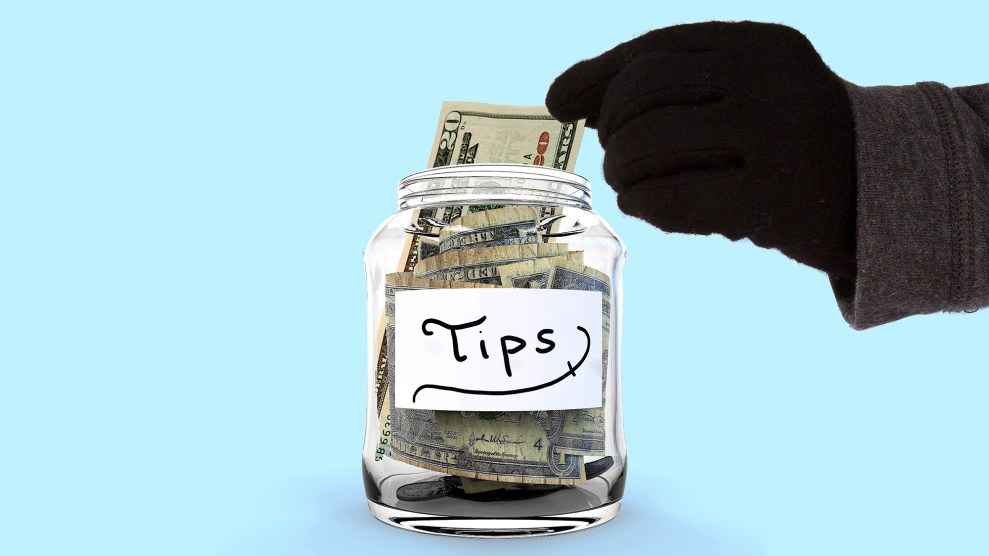 President Trump has long championed himself as a hero of America’s working class. But, as my colleague Noah Lanard highlighted back in September, Trump’s praise of the American worker is spoiled by how rapidly his Labor Department has pursued policies, like working to roll back overtime eligibility for millions of workers and delaying a requirement that financial advisers actually act in their clients’ best interests, that would further diminish their already-dwindling wages.

And earlier this month, the administration took another step toward making things even worse for low-wage workers with a proposed a rule change that will allow employers to pool the tips their employees earn (think servers at a restaurant) and share them with their untipped coworkers (think cooks and dishwashers). In a press release announcing the rule change, the Department of Labor claims “the proposal would help decrease wage disparities between tipped and non-tipped workers.”

But here’s the rub: The rule doesn’t actually require that employers share those tips with untipped staff. Under the proposal, employers can pocket those tips as long as workers earn the minimum wage. In fact, the Department of Labor all but openly acknowledges that the change could lead to this scenario: “The proposed rule rescinds those portions of the 2011 regulations that restrict employer use of customer tips when the employer pays at least the full Federal minimum wage.”

Now, the Economic Policy Institute (EPI) has a new report that totally debunks the Trump administration’s argument that the move will decrease wage disparities. Far from boosting the stagnating wages of workers, the rule change would in fact clear the path for rampant wage theft in an industry already wracked by the practice, just as worker advocates have warned. According to EPI’s estimates, employers across the country are likely to pocket $5.8 billion worth of employees’ wages if the rule goes through, in addition to an estimated $50 billion in wage theft already occurring nationwide.

And, as it turns out, many of the states who stand to lose the most from the change will be those that went for Trump. “The states that have the weakest labor protections tend to be the states that vote Republican in presidential elections,” David Cooper, a senior economic analyst with EPI and co-author of the report, tells Mother Jones. “So this is just another example of the Trump administration’s policies screwing over the very people he claims to be fighting for.”

The EPI researchers clustered states based on the level of protection their laws afford to the earnings of tipped employees. According to their analysis, 28 states fall into what basically translates into the least protective category, meaning they do the poorest job of making sure that employees’ tips make it home with them. These are the states most vulnerable to the rule change. (Some of that vulnerability stems from them falling outside of enforcement guidelines flowing from rulings in the 4th and 10th circuit.) Of the 28 states, 19 broke for Trump in 2016. In 11 of those states—Alabama, Alaska, Arkansas, Idaho, Indiana, Louisiana, Mississippi, Missouri, Nebraska, South Dakota, and Tennessee—Trump won by double digits. EPI estimates that in these 28 states, anywhere from 4.1 percent to 100 percent of tips will be pocketed by employers. In other words, tipped workers across those states could lose between $385 million to $9.6 billion in wages. The EPI’s current prediction, or “preferred estimate”: a staggering 43.91 percent of potentially transferred tips, or $4.2 billion, will be shifted from employees to bosses.

“This is particularly brazen and really disheartening for workers in those states [that voted for Trump],” Cooper says. “If their employer is cheating them, many of these states defer their wage theft enforcement capabilities to the federal government. So if I was in one those states and thought my employer was cheating me, I wouldn’t even have recourse within the state government to seek damages. I’d have to go to the Feds, and what Trump is essentially doing is saying that at the federal level, he’s going to legalize employers stealing from their workers.”

The rule is currently under consideration, and due to enormous pressure from worker advocates and Democratic lawmakers, is now in the middle of an extended 60 day public comment period.