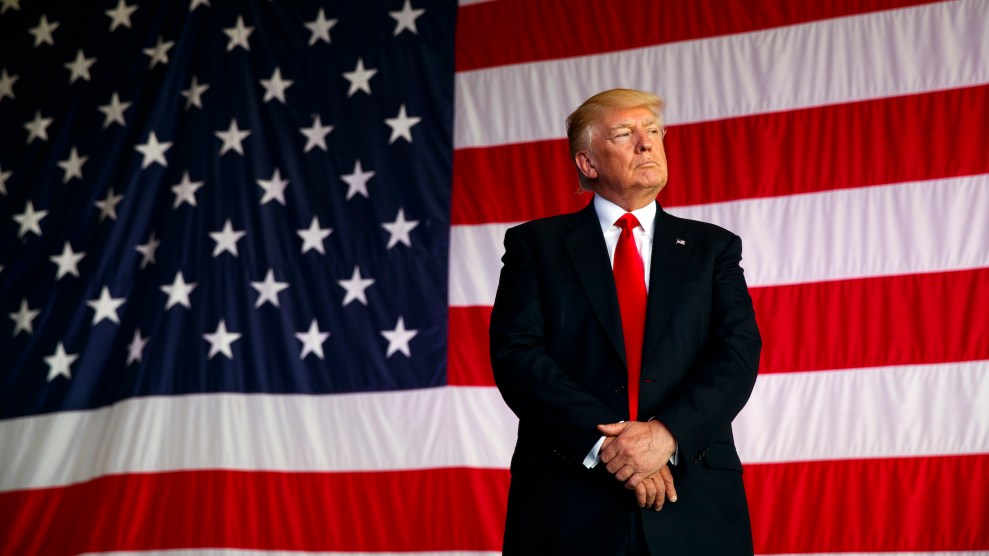 President Donald Trump is introduced to speak to US troops in Italy in May. Evan Vucci/AP

At a tax reform rally last week, President Donald Trump told supporters that “our tax plan is anti-offshoring and 100 percent worker…100 percent pro-America.” He didn’t explain how that fits with his plan to eliminate taxes on US company’s international profits.

The Republican tax plan can be divided into three buckets: individual, corporate, and international. That last bucket creates new incentives for companies to move factories overseas and shelter money in tax havens.

Today, the United States has what’s known as a worldwide tax system in which all profits—foreign and domestic—are subject to a 35 percent corporate income tax. If a US company wants to return foreign profits to the United States, it pays the 35 percent rate minus what it’s paid to foreign governments. The House and Senate tax bills replace this with a “territorial” system that drops the tax rate to 20 percent for domestic profits and nothing for foreign profits.

The territorial model that the GOP is pushing would create an additional incentive to invest in countries like Ireland where the corporate rate is significantly lower than the United States. Republicans believe the differences won’t be big enough to drive investment abroad. Steve Rosenthal, a senior fellow at the Tax Policy Center, disagrees, saying that’s still “plenty of juice” to encourage companies to shift production to countries with lower tax rates. Kimberly Clausing, an expert in international taxation at Reed College, writes that the shift to a territorial system “makes explicit, and permanent, the preference for foreign income over domestic income.” She estimates that profit shifting already costs the US government more than $100 billion per year.

Large multinational companies can already play games to avoid paying the full rate, such as transferring intellectual property to tax havens and then stashing those profits abroad to indefinitely put off paying US taxes. Apple, for example, transfers patents and other intangible assets abroad, and then further reduces its tax burden with additional sub-licensing. Through tax schemes with names like the “Double Irish With a Dutch Sandwich,” Apple has been able to amass more more than $128 billion in profits abroad that haven’t been touched by the IRS.

Republicans are proposing a series of guardrails to try to prevent companies shifting intangible assets—such as patents and trademarks—to tax havens. But Rosenthal says those protections are mostly ineffective and in fact create a set of new incentives to invest more abroad. He adds that it’s unclear whether the new status quo would be worse than the current system.

The main guardrail in the tax bills would impose a 10 percent tax on foreign profits that exceed a company’s “routine” return on tangible assets abroad. (Rosenthal’s blog post provides a more detailed explanation of how that works.) In theory, the guardrail would lead to companies paying a 10 percent tax when they shift profits to tax havens, but not when they actually make things abroad. In practice, the guardrail allows companies to shelter more money in tax havens when they build factories and other physical assets abroad—offering new tax incentives for companies to ship jobs overseas.

Either way, 10 percent is still half of what they would have paid if they hadn’t tried to game the system. Clausing argues that’s a clear sign Republicans are favoring foreign profits. Another is that Republicans’ aren’t using a territorial tax model that requires companies to pay a minimum rate in every country they operate in. Instead, the bill only considers whether they pay 10 percent abroad, on average. That’s an easy loophole to exploit. If Ford has a factory in Japan, it pays a corporate tax rate of about 30 percent. Ford could then shift intangible assets from the United States to a tax haven like Bermuda and still be paying more than 10 percent on a global basis. Clausing tells Mother Jones that it’s “well-known that a per-country minimum tax would be more effective and I think that’s why they didn’t do it.”

Almost everyone agrees that the current system for taxing foreign profits doesn’t work either. Under current law, US companies can indefinitely defer paying taxes on foreign profits. That’s led to companies keeping more than $2.6 trillion abroad. Trump—fashioning himself something of an offshore profits diviner—believes there is actually more than $4 trillion held abroad. Rosenthal isn’t sure where Trump gets that number. “He just makes things up,” Rosenthal adds.

For years, companies like Apple have been banking on Congress creating another “tax holiday” that would allow them return, or repatriate, money to the United States at a significantly reduced rate. The Obama administration proposed creating a tax holiday, and using the revenue to fund investments in US infrastructure. Both tax bills would use a 14 percent repatriation rate for the profits companies are currently hoarding in other countries. Republicans say this would lead to companies investing in US infrastructure. But in 2004, a “one-time,” 5 percent tax holiday mostly led to companies rewarding shareholders with stock buybacks and increased dividends, while laying off workers.

Proponents of the tax holiday argue the money is “trapped” abroad. Rosenthal says that’s misleading because the profits are often deliberately shifted there. Companies could return them anytime. They just don’t want to pay the taxes.