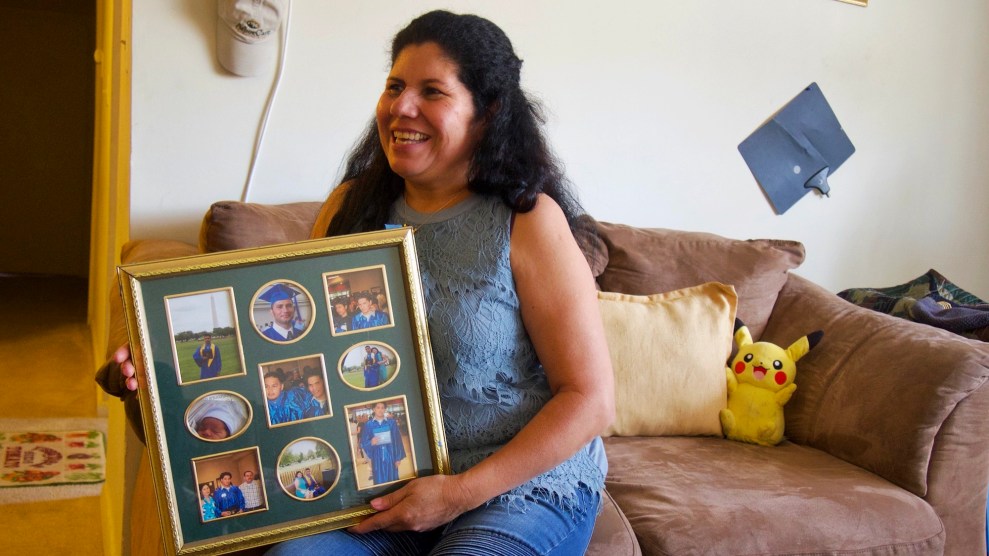 Carmen Paz holds a picture of her children at her Maryland apartment.Noah Lanard/Mother Jones

Here are a few things that have happened since Carmen Paz came to the United States from Honduras: Bill Clinton was impeached, the Twin Towers fell, she fell in love with another migrant from El Salvador, her two grandchildren were born, and their father was deported. For nearly two decades, she has been considered a “temporary” resident. Now that may be coming to an end.

Paz, speaking in Spanish from her garden apartment in Maryland, says there aren’t words to describe what it would be like for her or her partner of 16 years to lose the right to remain in the United States. She sleeps poorly, wakes up, and prays for a miracle each new day. “The night is the worst because we don’t know what will happen tomorrow,” she said last Sunday.

The next morning, on Monday, January 8, her fears came true when the Department of Homeland Security announced that her partner José, along with some 200,000 other Salvadorans, would lose the Temporary Protected Status (TPS) he’s enjoyed since 2001. The decision gives him and his countrymen until September 2019 to leave the United States, or find another path to legal residency. If they don’t, they face deportation.

The TPS program was created in 1990 to provide refuge to migrants already in the United States whose home countries federal authorities decide are unsafe to return to, usually because of armed conflict or natural disaster. Most nations quickly lose their temporary status, but there are exceptions. Honduran, Nicaraguan, and Salvadoran TPS holders have been able to legally work in the United States for nearly two decades. During that time, they’ve sent billions of dollars to relatives in their native countries, they’ve bought homes, started businesses, and built families that include more than 245,000 US-born children.

Immigrants with TPS have sent billions of dollars to their native countries, bought homes, started businesses, and built families.

The Trump administration’s decision to revoke the status from immigrants from El Salvador is an abrupt shift from Bush and Obama’s policies. In 2001, after back-to-back earthquakes devastated El Salvador, President George W. Bush issued a TPS declaration, granting Salvadorans in the United States the right to legally live and work on a temporary basis. The decision was renewed 11 times.

In the coming months the administration, which has already revoked TPS designations covering Haitian, Nicaraguan, and Sudanese migrants, will decide whether Paz, along with 57,000 other Hondurans, will, like her partner, lose their protected status.

Before she left Honduras, Paz made women’s shoes from a home workshop. But she struggled to keep the business going after her then husband’s death, and reluctantly left her three sons behind to head north. It was just months before Hurricane Mitch killed about 7,000 Hondurans in 1998. The tragedy brought a measure of relief for Paz and Hondurans already in the United States, as the Clinton administration decided to extend them temporary status.

Initially, Paz washed dishes at a restaurant in Wisconsin while her cousins did the cooking. But she’s mostly worked in hotels. After an illness that cost Paz the home she owned, she’s now back at it part time, cleaning rooms during the day and delivering whatever guests call down for at night. She’s tried to play the part of a model citizen: Not one ticket, she told me with pride. When asked what she does for fun, she mentioned taking a friend to dialysis.

The Trump administration’s curtailment of the TPS program for Central Americans dates to late October, when the State Department decided their countries, as well as Haiti, no longer needed the protections. Last week’s decision put that finding into action, as DHS declared that El Salvador’s 2001 earthquakes failed to justify the exemption. The fact that the country has become one of the world’s most dangerous nations since the disasters “doesn’t really apply,” a senior administration official told reporters last week. (El Salvador’s 2017 murder rate was 64 per 100,000 people, compared to about 5 in the United States.)

On Tuesday, Secretary of Homeland Security Kirstjen Nielsen told senators US law requires that TPS extensions be solely based on whether a country has recovered from its original disaster. Her interpretation clashes with the Obama administration’s, which cited increasing insecurity as a reason for extending El Salvador’s protected status in 2016. The DHS website states that TPS can be granted because of natural disasters, as well as armed conflict and other “extraordinary” conditions.

Back in November, White House Chief of Staff John Kelly—who was Trump’s first Homeland Security Secretary before moving to the West Wing—reportedly pressured Nielsen’s predecessor, acting secretary Elaine Duke, to end protections for Hondurans. Duke refused, triggering an automatic extension until July 2018. The delay means that Nielsen—Kelly’s former White House deputy and his handpicked successor to run DHS—will be in charge of making a decision about Honduras’ protected status in the coming months.

Oscar Chacón, the executive director of Alianza Americas, a network of immigration organizations, predicts the TPS rollback will continue. While Chacón speculates that Honduran President Juan Orlando Hernández, a conservative US ally who has worked to reduce migration and drug trafficking, might push to preserve his citizens’ ability to live and work in the US, he thinks Hondurans are likely to lose the protection.

Paz says the person taking care of her Tegucigalpa home has been forced to pay protection money to gangs.

Last week, I asked Paz if she thought people losing protected status would leave the country on their own. Paz was sitting with an organizer from the advocacy group CASA de Maryland. Together, they said TPS holders wouldn’t, before they burst out laughing. The prospect was absurd. Returning is the last thing she would do, Paz said.

Chacón says immigrants who try to stay in the United states as undocumented migrants may have to move to avoid being apprehended: TPS applications require an address, and government agents could use that information to try to detain them.

Paz still has a home in Tegucigalpa, but she warns that the person taking care of it has been forced to pay protection money to gang members. Paz believes she’d get killed if she returned from the United States without dollars. At very least, the “rent” would increase, she said.

Aside from security, there are other reasons Paz isn’t interested in going home: her mother and sister have died since she left, and her two US-born grandchildren now see her as a second mom. There are also relatives in Honduras and El Salvador that depend on the dollars she and José earn. Last year, one of her sons, the father of her grandkids, was deported after being pulled over with an expired license. He’d run into legal trouble before, and was picked up by Immigration and Customs Enforcement (ICE) outside the courthouse while going to pay the ticket.

Paz now sends him a $100 a month along with cell-phone videos of his two-year-old. In one, he repeats after his grandmother in Spanish and English; “Hi papi…te quiero…mucho…I love you.”

Even if Paz wanted to leave, she says it’s not clear how such a move would turn out. Would José join her family in Honduras, a country he doesn’t know? How would she and her relatives get by without the dollars they’ve been earning in the United States?

“With all of us there, we’d be eating each other,” she said. “This is chaos.”