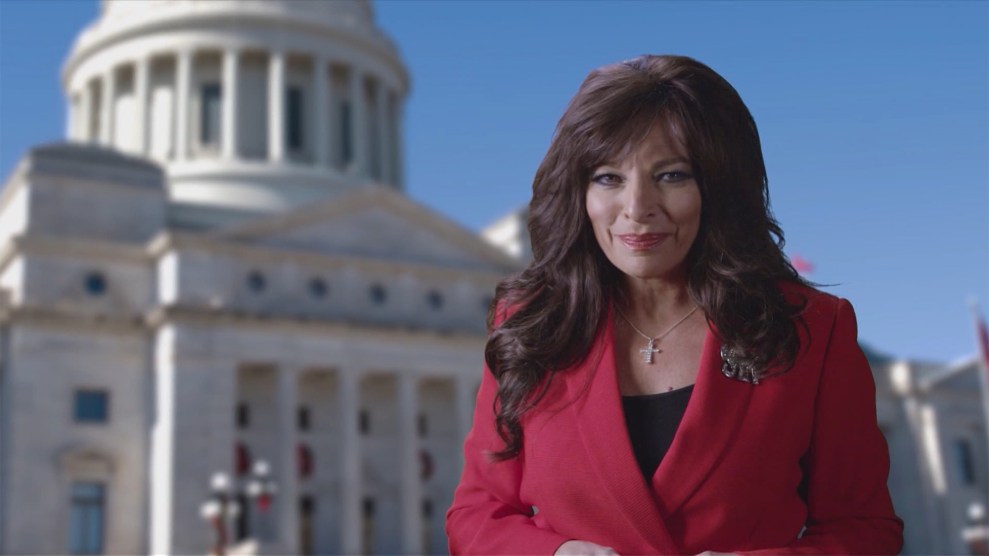 For indispensable reporting on the coronavirus crisis, the election, and more, subscribe to the Mother Jones Daily newsletter.
Arkansas governor Asa Hutchinson’s Republican challenger, who has been drumming up support from far-right types for the May primary, thinks the state should dedicate money for cops, courts, and prisons at the expense of the social safety net. This, according to her campaign website, is how to keep people safe.
“Crime has continued to rise in parts of the state. We must ensure we have the resources to protect the public,” Morgan says in an campaign platform outline on her website. “This means prioritizing funding for our prisons, courts, and law enforcement over welfare programs and non-essential functions of government. We cannot fail on keeping our people safe. That is one of the primary purposes of state government.”
Morgan—whose website also boasts that she’s a national spokeswoman for the group Citizens for Trump, a political analyst for Fox News, and an NRA-certified firearms instructor—announced her candidacy in a video released New Year’s Eve in which she touts her Tea Party credentials, including her ardent support for gun rights, cutting taxes, and—wait for it—her opposition to Sharia Law.
In the past, Morgan has criticized Hutchinson for campaigning “like a conservative Republican but [governing] like a liberal Democrat.” On her site, she slams him for failing to sign a bill that would have outlawed Sharia Law in Arkansas’ court systems. “I’m searching for a reason for that legislation,” Hutchinson said last February,  adding that he had “not identified that as a problem” in Arkansas.
Morgan drew controversy in 2014 after declaring in a blog post that the gun range she had recently opened would be a “Muslim-Free Zone.” In an update, she wrote that she “refuse[d] to train the next islamic terrorist.”
Her call to prioritize cops, courts, and prisons runs counter to a national bipartisan movement toward less-punitive criminal justice practices at the local and state levels, based on recognition that harsh incarceration policies drain state coffers with little to show in the way of public safety. Yet Morgan’s campaign statement mirrors the tough-on-crime rhetoric of the Trump administration and Attorney General Jeff Session—an outspoken foe of criminal justice reform.
Morgan is a pretty fringe candidate. Does she have a fighting chance against Hutchinson in May? Well, weirder things have happened in America.