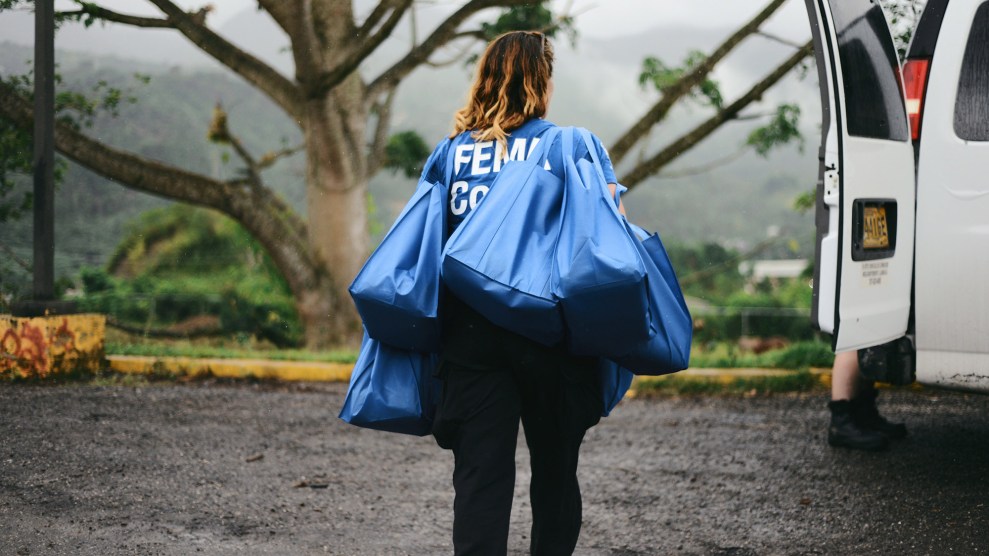 FEMA is not stopping food and water distribution in Puerto Rico, according to an agency spokesperson in San Juan, despite earlier reports that the agency would “officially shut off” such efforts on January 31 and give remaining supplies to the local government to distribute.

“We’re not stopping, nothing is changing, we’re going to continue to provide commodities to communities that need it,” Daniel Llargues, a FEMA spokesperson in San Juan, told Mother Jones Wednesday afternoon.

The announcement came after an NPR story broadcast on Monday gained wide attention. The network reported that the agency planed to halt deliveries within the week, and interviewed Alejandro De La Campa, FEMA’s director of the island, who explained that by continuing to provide food and water, the agency was hindering Puerto Rico’s economic recovery by deterring people from grocery stores. “So we need to create a balance,” he said. “With the financial assistance we’re providing to families and the municipalities, they’re able to go back to the normal economy.”

On Tuesday, in response to NPR’s story, the government of Puerto Rico issued a statement saying they had not been informed “that supplies would stop arriving, nor did the Government of Puerto Rico agree with this action.” The statement said that FEMA and the island’s government had begun discussions about winding down and transferring responsibility for food distribution, but that no date had yet been agreed upon.

As Mother Jones reported Tuesday, FEMA issued its own statement in response to the NPR story, saying that their mission “continues” and that it would still support “documented needs” of island residents. But the agency’s Tuesday statement did not push back against the NPR report’s central claim that food and water distribution would soon shut down.

A statement issued Wednesday by the government of Puerto Rico and posted by CBS News’ David Begnaud said that Gov. Ricardo Rosselló ordered government officials to “request a clarification from FEMA,” and that the local government and FEMA had agreed to continue distribution to “the communities that still need it.”

Reports that FEMA was “shutting off” its relief efforts and that the government of Puerto Rico had not been consulted simmered Tuesday in the hours before President Donald Trump was set to deliver his first State of the Union address. In his record-long speech the president mentioned the hurricane wracked island once, telling Congress: “To everyone still recovering in Texas, Florida, Louisiana, Puerto Rico, the Virgin Islands, California, and everywhere else—we are with you, we love you, and we will pull through together.”

Trump tells the people affected by natural disasters, specifically Puerto Rico, “We love you. We are with you”.
Tomorrow, FEMA officially shuts-off operations in Puerto Rico. https://t.co/xAhVZLpjwV

FEMA has decided to “officially shut off” food and water aid on Wednesday. Wow.https://t.co/GYwvb7rOUj

“We’re not going anywhere,” Llargues reiterated. “We’re not stopping, especially with something as essential as food and water.”