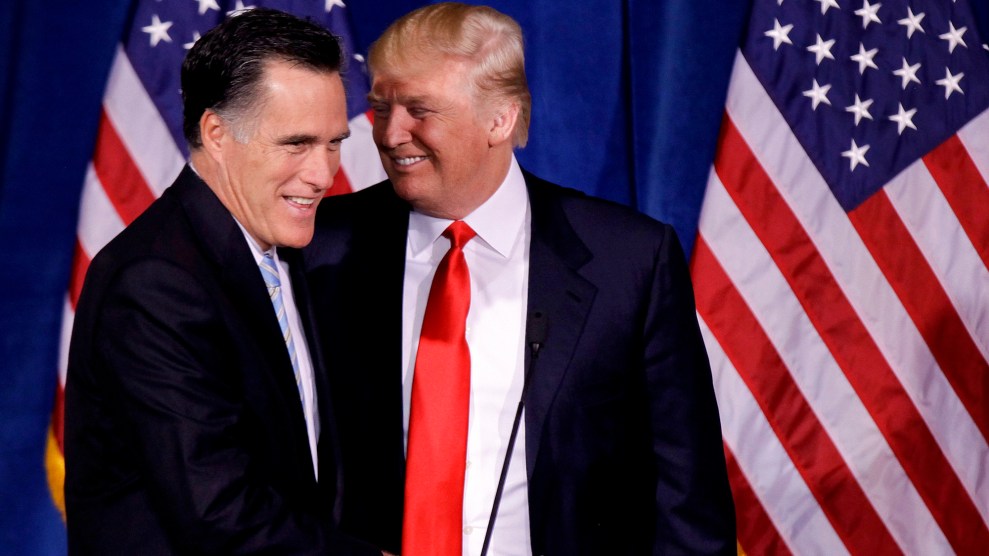 Once again, the political-media world is in a tizzy over a Donald Trump remark. In a White House meeting on Thursday, he…oh, you know what happened. “Shithole”—he referred to African countries and possibly Haiti as “shithole countries.” Yeah, Trump in a tweet—half a day after the story broke—denied it. But does anyone believe he didn’t say that? News anchors—notably CNN’s Anderson Cooper and Don Lemon—branded Trump a “racist.” And, as could be predicted, a handful of hardly brave Republicans came forward with carefully calibrated wrist-slaps. Outgoing Sen. Jeff Flake (R-Ariz.) said, “The words used by the President, as related to me directly following the meeting by those in attendance, were not ‘tough,’ they were abhorrent and repulsive.” And Sen. Marco Rubio (R-Fla.) pointed out that Haitian Americans “are serving in public office as members of both political parties.” But as with many of Trump’s excesses, GOP outrage was muted, at best. (Some media reports portrayed White House aides as even bragging about the “shithole” comment, braying it would play well with Trump’s base.)

With the nation—or at least, part of it—trying to come to terms with this latest manifestation of Trump’s vileness, it’s a good time to remember a fundamental reality: Trump became racist-in-chief because Republicans and conservatives embraced him and normalized his racism-driven politics.

Trump has a long history of what Axios once politely called “racial controversies.” Being sued for racial discrimination in his housing developments, inflaming racial tensions in New York City related to crime, and more. But he didn’t hit the big time in racial politics until 2011, when Trump, who was then considering running for president in 2012, became the nation’s No. 1 birther. For reasons that still remain unclear—perhaps he was looking to win over conservatives—he seized upon the already discredited conspiracy theory that President Barack Obama was born in Kenya. That would mean that the first African American president had not been eligible for the presidency and, consequently, was wrongfully in the White House, as the most illegal illegal alien of all time.

Trump threw all his enthusiastic, fact-free hucksterism into this cause. He demanded Obama produce his birth certificate (which he had already). Trump claimed he had sent his own investigators to Hawaii to dig up the truth and “they cannot believe what they’re finding.” (Trump never disclosed these, uh, findings.) He suggested that Obama might be a Muslim and had possibly pulled off “one of the greatest scams of all time.” He hinted there was a tape that would come out and prove Obama was born in Kenya; he said there was a book that would confirm this.

Trump was peddling virulent stuff. And it was fair to call this a racist effort. There was no evidence. But there was this basic fact: Obama was black. And Trump was trying to delegitimize him, playing to conservatives who detested Obama. Trump was promoting the sentiment that Obama was “the other”—literally a foreigner who had usurped power in the United States. Just as he was heading toward birtherism, Trump appeared at the annual Conservative Political Action Conference. He didn’t raise the birther issue, but he did feed the conspiratorial bias of his audience, declaring there was something shifty about Obama’s past: “The people who went to school with him never saw him, they don’t know who he is. Crazy.” That was absolutely false. (I say this as someone who has had to listen to a fair number of people tell me their I-went-to-school-with-Obama anecdotes.) And it was soon after this appearance—where he was warmly received—that Trump began waving the birther flag.

As Trump pursued this crusade, there were no Republicans and few members of the media who called out his racism—or his nuttiness. In fact, Republicans and conservatives eagerly welcomed him into their circles. In early 2012, Mitt Romney, who was then fighting for the GOP presidential nomination, turned to Trump for help. Prior to the Nevada caucuses, he courted the celebrity businessman’s support and won him over. Romney trekked to Trump’s Las Vegas hotel for an event announcing Trump’s endorsement. There the Republican front-runner praised the real estate magnate and noted it was just so darn awesome to be backed by Trump. “There are some things that you just can’t imagine happening in your life,” Romney gushed. By this point, Trump was mostly known in politics for his racially charged campaign to discredit Obama. With this meeting, Romney signaled that Trump was fine company for the GOP and that his over-the-top birtherism was no disqualification. And when Romney months later was asked if Trump’s birtherism concerned him, he punted: “You know, I don’t agree with all the people who support me and my guess is they don’t all agree with everything I believe in.” The Republican tent had room for this reality-denying reality television celebrity.

Throughout 2012, Trump kept selling the swill. Though Obama had produced his long-form birth certificate the previous year, Trump repeatedly insisted it was a forgery. He tweeted, “An ‘extremely credible source’ has called my office and told me that Barack Obama’s birth certificate is a fraud.” Of course, Trump had no proof to reveal. But he wouldn’t let go and repeatedly claimed the birth certificate was phony. (At one point later on, Trump even despicably tweeted, “How amazing, the State Health Director who verified copies of Obama’s ‘birth certificate’ died in plane crash today. All others lived.” Imagine using the tragic death of a public servant to score a political point based on a falsehood.)

Trump’s stubborn promotion of a lie designed to exploit racist sentiments did not offend the conservative leaders in charge of CPAC. They invited him back for their 2013 conference. There Trump drew a standing ovation and proclaimed, “The president is given sadly unprecedented media protection. It’s incredible when you see what’s going on, it’s absolutely incredible.”

Hugged by Romney, cheered by CPAC, Trump the Birther was now a huge star in the Republican/conservative cosmos. His racist endeavor—still underway—did not matter. And Trump certainly learned a valuable lesson: Not only can I get away with this; I can bolster my political position with this schtick. So it was no wonder that during the 2016 election Trump continued to utter remarks that would draw accusations of racism. And since that was how he won the White House, there was no reason for him to change his conduct—as if he could—as president. What was previously obvious is only more obvious today. See the Washington Post story published on Friday morning headlined, “Trump’s candidacy and presidency have been laced with racist rhetoric.”

Trump did not reach this “shithole” moment on his own. He had plenty of help from Republicans and conservatives along the way. His racist comment is much more than the latest reminder of his dark soul; it is a reflection of the values (or lack thereof) of a party and movement that has accepted Trump and elevated him to its highest rank.