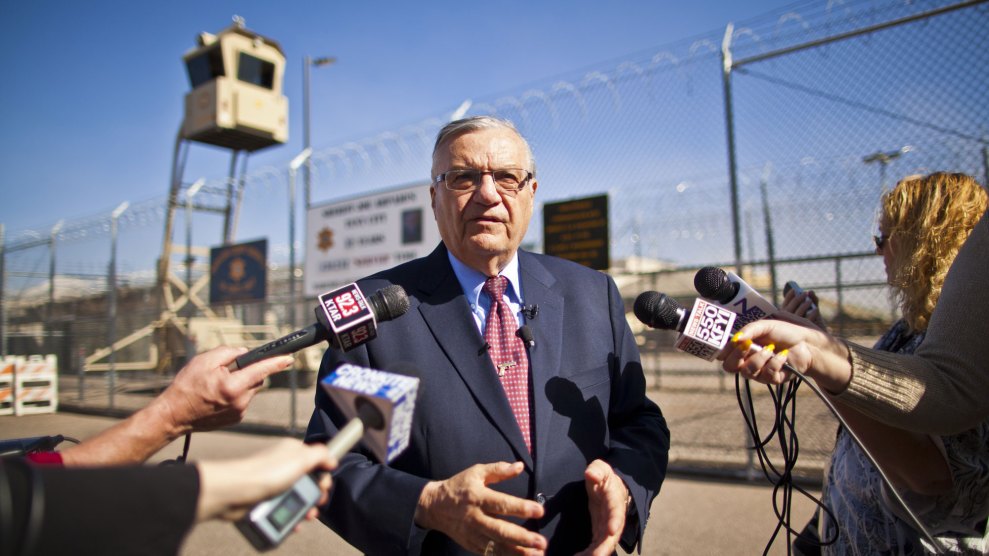 America’s most notorious racist sheriff is running for Senate. The Washington Examiner‘s David Drucker reported Tuesday that 85-year-old former Maricopa County Sheriff Joe Arpaio—who lost his job to a Democrat in 2016, was convicted of contempt for refusing to comply with a court order instructing his department to stop racial profiling, and was pardoned last fall by President Donald Trump in part because of his advanced age—will join the Republican primary to replace retiring Sen. Jeff Flake.

The Republican primary was already shaping up to be a bitter contest. The field includes former state Sen. Kelli Ward, an ER doctor who once held a public hearing on the theory that the government was poisoning citizens via airplane exhaust, and will likely include US Rep. Martha McSally. The winner will likely take on Democratic Rep. Kyrsten Sinema this fall.

Although Arpaio is exalted as an icon of law and order on the right, his two decades in power were defined by a pervasive lawlessness and authoritarian tendencies. Inmate jail deaths were common—the county was forced to pay tens of millions of dollars for wrongful death settlements during Arpaio’s tenure. When the Phoenix New-Times published a story documenting Arpaio’s personal wealth, the sheriff had the reporters arrested on a false charge. (The county was forced to pay a $3.75 million settlement.) Arpaio famously convened a cold-case posse to investigate President Barack Obama’s birth certificate.

But Arpaio’s singular legacy was his mistreatment of Hispanic residents of Maricopa County. Ultimately it’s what brought him down. A 2011 Department of Justice investigation found that Arpaio’s office “engages in a a systemic disregard for basic constitutional protections.” As Mother Jones reported at the time:

Arpaio was eventually ordered to halt his department’s racist practices. It was his refusal to do so that ultimately resulted in his conviction. Arpaio’s efforts to round up immigrants came at the expense of other law-enforcement duties. His office ignored more than 400 sex crime cases during his tenure. Some of the victims were undocumented immigrants.

With Flake’s retirement and the state trending toward toss-up territory—Hillary Clinton lost by 3.5 points in 2016—Arizona will be one of Democrats’ top opportunities to pick up a seat in the Senate this fall. Democrats would love another shot at Arpaio, who underperformed Trump by 16 points in Maricopa County (and underperformed Sen. John McCain by even more) and whose presence in public office has been a boon for Latino political organizing in the state.