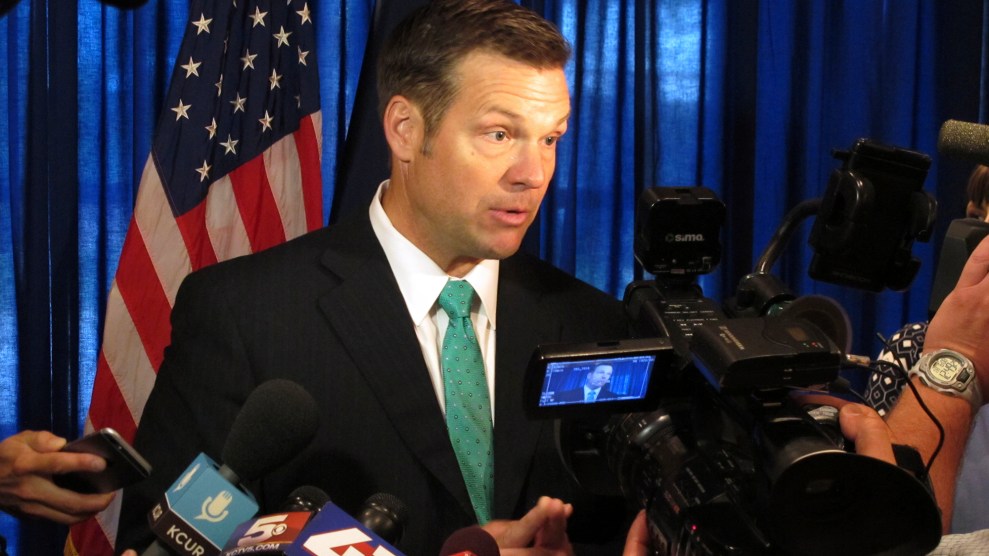 Kansas Secretary of State Kris Kobach launches his campaign for the Republican nomination for governor in June 2017. John Hanna/AP File

The office of Kansas Secretary of State Kris Kobach, which controls sensitive information on millions of American voters through the Interstate Crosscheck Program, posted online the partial Social Security numbers of thousands of state employees and politicians—including Kobach’s own. It’s the latest in a series of security breaches involving Kobach, a candidate for governor this year who ran President Donald Trump’s election integrity commission until it folded earlier this month.

Many Kansas state employees and candidates for office must fill out a public disclosure form to document financial or business interests that could pose a conflict of interest. The form includes an optional field asking for the last four digits of their Social Security numbers, known as an SSN4, to help the state can differentiate between state employees with similar names. Kobach’s office posted more than 100,000 of these forms on its website, Gizmodo’s Dell Cameron discovered. The combination of name and SSN4 can be cross-referenced against previously hacked databases, such as the massive Yahoo breach in 2013, allowing hackers to identify, locate, hack, steal the identities of, and, in some extreme cases, blackmail those exposed.

Kobach is the nation’s most vocal proponent of restrictive voting laws, and together with his allies on the election commission, he sought to generate evidence of voter fraud in order to promote these laws. He led an attempt by the commission to collect personal data on every voter in America but was partly or fully rebuffed by nearly every state government. He has faced mounting questions in recent weeks over security breaches and privacy concerns with Crosscheck, a system that compares voter registration data from more than 30 states and flags matches that suggest a person is registered in more than one state. Studies have shown that Crosscheck produces false positives at the alarming rate of 99 percent.

Not only is Crosscheck’s data unreliable; it’s also not secure. As Mother Jones reported this fall, Crosscheck has been uploading data files over unsecured systems and emailing login credentials back and forth. This means that Crosscheck—along with the data on millions of voters it contains—is vulnerable to hacking. As Shawn Davis, director of digital forensics at Edelson PC, a Chicago-based law firm specializing in technology issues, explained to Mother Jones:

If a hacker sent a “phishing email” to Kansas pretending to be from another state that’s part of Crosscheck, Davis says, he or she could potentially get access to the voter files of every state participating in Crosscheck. That information could be stolen, released, or even modified, Davis says. “It’s not very secure at all,” he says of Crosscheck.

This and other revelations, including the leak of SSN4 information in Florida, pushed Kobach’s office to improve security this year. Researchers still believe that Crosscheck data is significantly exposed to hacking. If states can’t trust Kobach with their data, some could withdraw from the program.

Following an inquiry from Gizmodo, Kobach’s office took the information down from its website, but it admitted no wrongdoing, noting that Kansas law requires making the forms publicly available. But Kobach’s office clearly dealt carelessly with the information, even if it didn’t break any laws. As Gizmodo discovered, the website purportedly required a password to access the records, but anyone with the URL could circumvent the login process. Moreover, Kobach’s office could have realized that it was problematic to ask for SSN4s on publicly available forms and pushed to revise the form.