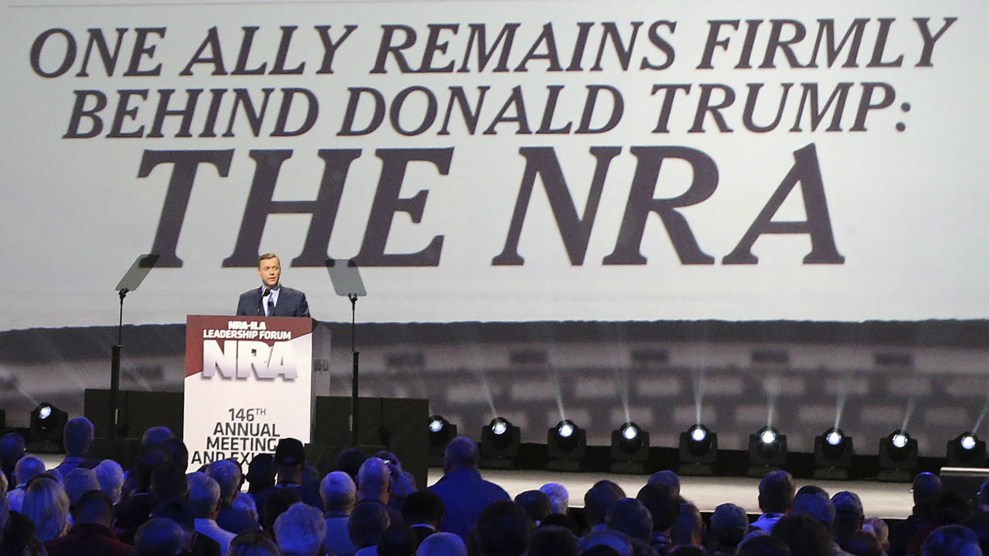 The National Rifle Association’s political arm set a fundraising record in 2016, taking in a staggering $366 million. That’s according to the group’s latest annual filing with the Internal Revenue Service, a copy of which was obtained by Mother Jones.

The massive haul was a $30 million increase from the group’s 2015 fundraising effort. It was helped by a single donation of $19.2 million in 2016. The filing lists the source of that massive donation both as a “person” and as the NRA Foundation, a non-profit charitable wing of the organization. An NRA spokesman declined to clarify whether an individual was the ultimate source of that $19.2 million that went from the NRA Foundation to the NRA flagship group, instead referring to IRS instructions that say a “person” can mean “individuals, fiduciaries, partnerships, corporations, associations, trusts, and exempt organizations.” The next largest donor was an anonymous individual who gave $662,000.

The figures in the IRS filing are for the NRA’s politically active non-profit arm—a 501(c)(4) entity, in IRS parlance. The 501(c)(4), which is legally allowed to participate in political campaigns, spent $412 million in 2016, far more than even its record fundraising figure.* Separately, the NRA has a Political Action Committee, which also engages in electoral spending.

In 2016, the NRA devoted huge sums of money to winning back the White House and protecting Republican control of Congress; the 501(c)(4) and the PAC spent millions of dollars on television and radio ads. They poured more than $54 million into electing GOP candidates up and down the ballot, according to the Center for Responsive Politics, with a focus on supporting Donald Trump and a slate of Republicans running for the US House and Senate. Those investments paid off. All but a few of the candidates who received NRA backing won their respective elections.

As president, Trump—who benefited from $10 million in NRA spending backing his candidacy and another $19.7 million attacking Democratic nominee Hillary Clinton—has spoken at NRA events and pledged his loyalty to the group. “You came through for me, and I am going to come through for you,” he said at the NRA’s annual meeting last April. “The eight-year assault on your Second Amendment freedoms has come to a crashing end. You have a true friend and champion in the White House.”

Trump made fears about gun violence a central part of his campaign, but as president he has done little to curb that violence. At the same time, he has methodically, if quietly, taken steps to relax gun control policies. The Justice Department tightened the definition of who qualifies as a “fugitive from justice” when it comes to gun ownership, in effect making it easier for certain people with arrest warrants to possess firearms. The Interior Department removed a ban on hunting with lead ammunition on federal lands. And a bill signed last February prohibited the Social Security Administration from reporting recipients with mental impairments to a national background-check database. The NRA applauded the latter two actions.

It’s difficult to compare the single $19.2 million donation the NRA received in 2016 to donations from previous years. That’s because similar donation data hasn’t been disclosed on the group’s past annual filings. But the NRA’s top-line financial information suggests that 2016 overall was a banner year. As recently as 2011, the NRA’s 501(c)(4) raised just $211 million, and in 2015 it raised $336 million—$30 million below its 2016 haul. Nearly all of that increase came from donations.

The full NRA filing can be read below.