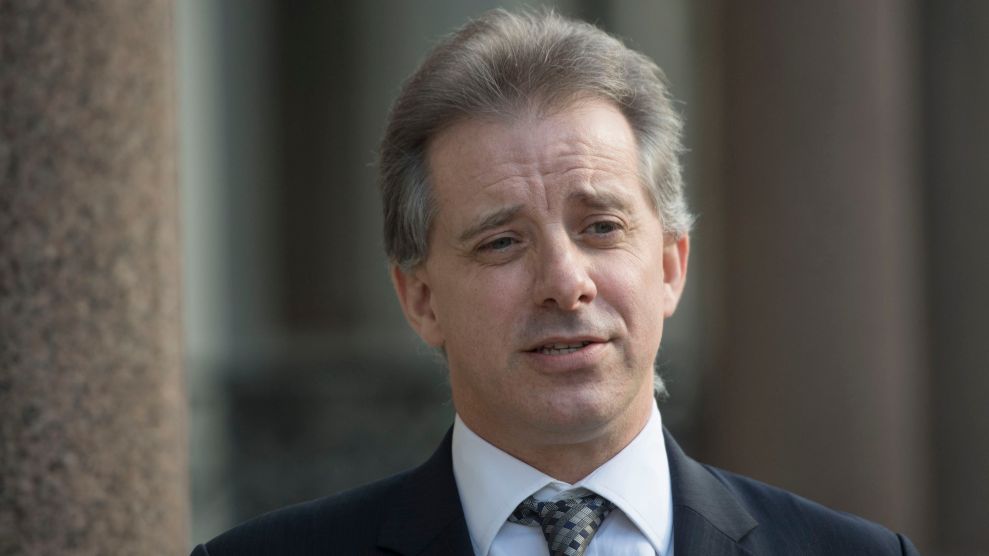 Christopher Steele is not the issue. Yet the former British intelligence official who wrote a series of unconfirmed reports on Trump-Russia connections during the 2016 campaign seems to have become the main target of congressional Republicans. On Friday, two Republican senators—Charles Grassley of Iowa and Lindsey Graham of South Carolina—released a letter they had sent the previous day to the Justice Department and the FBI requesting a criminal investigation of Steele. There have been no other known congressional criminal referrals related to the Russian attack on the 2016 presidential election or to interactions between Trump associates and Russians during the campaign.

In recent weeks, Capitol Hill Republicans have intensified both their attack on special counsel Robert Mueller’s Trump-Russia investigation and their call for a quick end to the congressional inquiries. And with this move, Grassley and Graham are trying to bolster the Republicans’ Trump-saving counter-narrative: the real scandal is the Steele dossier.

Pause for a moment and ponder this. The US intelligence community has concluded that Vladimir Putin ordered a clandestine act of information warfare against the United States to harm Hillary Clinton and help Donald Trump during the election. And during that race, Trump’s camp had a series of contacts with Russians or suspected cut-outs. Also throughout the time Putin’s operation was under way, Trump and his lieutenants kept denying this assault was happening—even after his top campaign aides were informed that Moscow wanted to secretly assist Trump and after Trump was briefed by US intelligence agencies that Russia was behind the hack-and-dump assaults targeting Clinton and the Democrats. That is, the public now knows that the United States was attacked by Putin, that Trump associates were interacting with Russians during this period, and that Trump and his crew, intentionally or not, provided cover for Moscow by insisting no such operation was occurring.

Yet what now draws the ire of congressional Republicans the most is Steele and his reports.

A full and complete investigation of the Trump-Russia scandal would certainly consider the role of the Steele memos. But the Republicans have fixated on the Steele dossier to create a distraction to undermine the foundational realities of the controversy. And it’s not the first distraction they have tried to create. Remember the so-called “unmasking” scandal of last spring? It was not a scandal, but it was an attempt by congressional Republicans, led by Rep. Devin Nunes, the GOP chair of the House intelligence committee, to prop up another controversy to divert attention from the Putin’s meddling and Trump-Russia interactions. In that episode, Nunes and others suggested the big wrong was that US officials had unmasked the redacted identities in intelligence reports of Americans who had been picked up by intelligence intercepts talking to foreigners, such as Russian officials. It turned out there was nothing improper with this and was S.O.P.

The Republicans later moved on to a new big distraction: Steele. Their contention was that his memos, prepared for a research firm, Fusion GPS, which was being paid by the Clinton campaign and the Democratic Party, had been the trigger for the FBI’s investigation of the Trump-Russia contacts, which began last July. This meant, they insisted, that the FBI probe had been poisoned from the start, kicked off by unverified political opposition research. Here was their view of the scandal: a nefarious, Democratic-funded outfit had used phony info to manipulate the FBI into investigating Clinton’s opponent. (In some versions of this tale, the FBI is a witting partner, part of a Deep State that eagerly wanted to sabotage Trump from the start.)

There was never any evidence for this GOP fairy tale. But a few days ago, a giant hole was blown into it, when the New York Times revealed that what prompted the FBI to open its Trump-Russia investigation last summer was a tip the Australian government conveyed after Trump campaign aide (and now felon) George Papadopoulos told an Aussie diplomat that he had heard from an intermediary with Russian officials that Moscow had dirt on Clinton, including thousands of emails. So, no, dear Fox News viewers, the Steele memos—which Steele did share with the FBI (due to his shock at what his sources were telling him)—did not lead to the bureau’s investigation. (Recently, I was drawn into the GOP mishegas, when Republican congressional sources insinuated to Politico that an FBI official was the source  for the article I published a week before Election Day that revealed the existence of the Steele memos and disclosed that Steele had shared his material with the bureau. Their implication: the FBI was spreading the Steele memos to create an October Surprise to tarnish Trump. The problem: no one from the bureau was a source for that story.)

This latest development—the Australian connection—clearly has not stopped Republicans from pushing the it’s-all-because-of-Steele conspiracy theory. And now, as Mueller’s investigation moves ahead and continues to threaten the Trump administration, Republicans who seem less concerned with how Trump aided and abetted Putin’s assault on an election are seeking to keep this story alive by targeting Steele with a criminal referral. It is impossible to evaluate the validity of any case against Steele, since the referral mentions no details and appears based on classified information Grassley and Graham have received. And it is important to note that anyone can make a criminal referral to the Justice Department and the FBI, and neither body is under any obligation to act upon a referral. The senators’ referral letter hints that Steele lied to FBI agents about his contacts with reporters when he spoke with the bureau during the campaign about his reports. (Interest declared: I am one of the reporters who interacted with Steele during this period.) Presumably, the FBI would be in a position to evaluate on its own whether a criminal investigation was warranted.

Had Grassley and Graham devoted as much time and attention to digging into the real guts of the Trump-Russia scandal so they could provide the American public with a full accounting of what happened, their focus on Steele and his memos would not reek of political cynicism. Yet the Republicans on the Hill have signaled they want to smother and finalize the congressional inquiries and get this whole damn thing over with—and protect Trump and, perhaps as a necessary evil, Putin.

The Republican Party, which for decades claimed it was the party that championed patriotism and national security, has jettisoned these priorities for Trump protectionism. It simply doesn’t seem to give much of a damn about what happened during the 2016 campaign and what Trump did to encourage or assist the Russian operation to subvert a US election. Steele may now well be the latest victim of the GOP’s abdication of its responsibility to safeguard the country.