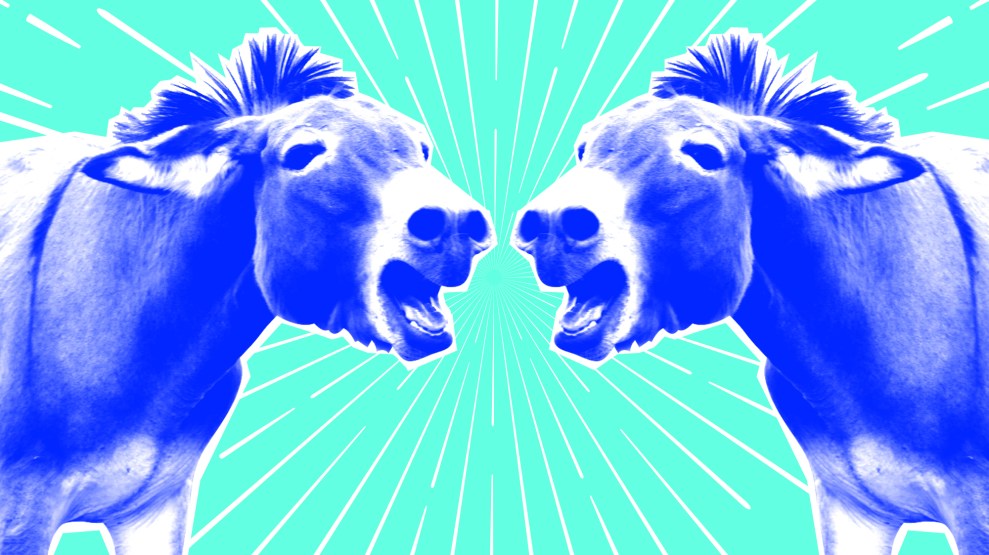 With 10 Democrats up for reelection in states Donald Trump won, the party needs a lot to go right if it’s going to take back the Senate this year. But at least one big thing already has: The most vulnerable Democratic incumbents have almost universally avoided any kind of primary challenge. Even as the party lurches left, moderate Democrats in red states—such as Missouri Sen. Claire McCaskill, North Dakota Sen. Heidi Heitkamp, and Indiana Sen. Joe Donnelly—are running without opposition from their party’s insurgent wing. In fact, the only Democratic senator to face a high-profile challenge from the left is Dianne Feinstein, in deep-blue California.

But the Senate notwithstanding, 2018 is shaping up to be a big year for Democrats, and a series of high-stakes primary contests this spring and summer will determine what kind of party emerges when the dust settles in November. Many of the debates that have dogged the party over the past few years (and beyond)—the role for pro-life Democrats, the power of big-money donors, and the future of the Bernie Sanders coalition—will be playing out once again in various races across the country. Here’s a quick guide to some primaries to watch:

IL-03: Democrat Dan Lipinski has been a thorn in progressives’ side almost since he inherited the seat from his father, longtime Rep. Bill Lipinski, in 2004. Although the seat, which includes parts of southwest Chicago and the suburbs, is safely Democratic, the younger Lipinski is staunchly anti-abortion, has voted to defund Planned Parenthood, and is a member of the centrist Blue Dog caucus. Activists have taken aim at the incumbent several times over the last decade, with little to show for their efforts. But this year Lipinski will face his toughest primary test—from businesswoman Marie Newman. The reproductive rights advocacy group NARAL, Democracy for America (the progressive organization founded by Howard Dean), and the LGBT rights group Human Rights Campaign are all backing Newman, as is New York Sen. Kirsten Gillibrand. The March 20 primary will be a major test for activists who want the party to draw a clearer line on reproductive rights.

California Senate: For all the talk about do-nothing moderates, Democrats have mostly left their vulnerable Senate candidates alone. Perhaps that’s because, aside from early defections on Cabinet secretary confirmations, Senate Democrats have uniformly held the line on big votes in the Trump era. Democrats voted unanimously against GOP efforts to dismantle Obamacare and cut taxes, for example. But in deep-blue California, Sen. Dianne Feinstein wasn’t so lucky. The 26-year incumbent, who has frustrated liberals with her moderation—and frustrated ambitious California Democrats by being a 26-year-incumbent—will face state Senate President Kevin de Leon in the June 5 open primary. Under California’s election rules, Democrats and Republicans compete in the same primary, and the top two vote-getters, regardless of party, move on to the general election. So there’s a good chance this race won’t be settled until November.

Maryland Governor: As hostile as the Senate map is for Democrats, the 2018 gubernatorial races offer huge opportunities. Republicans in 13 states carried twice by Barack Obama are either retiring or up for reelection. Maryland is among the bluest, and nine Democrats have signed up for a chance to take on GOP Gov. Larry Hogan. The most notable Democratic contender is former NAACP president Ben Jealous, a high-profile Sanders supporter who is framing his campaign as an opportunity for Sanders’ movement to score a big electoral win and turn Maryland into a laboratory for progressive politics.

Illinois Governor: Billionaire Republican Gov. Bruce Rauner had a whopping $68 million in his campaign account as of last fall, which all but guarantees that the general election will be one of the most expensive governor’s races ever. Democrats just might nominate a billionaire of their own. Hotel magnate J.B. Pritzker currently leads the field. Next in line is Chris Kennedy, son of former Sen. Robert F. Kennedy. State Sen. Daniel Biss, a former University of Chicago math professor, has tried to carve out a spot as a Sanders-style progressive, but his Democratic Socialist running mate, Carlos Ramirez-Rosa, was dropped from the ticket because of his support of the BDS movement, which advocates economic boycotts and sanctions against Israel. The populist left is supposed to be ascendant right now, particularly in the Midwest; Illinois may test its limits.

Georgia Governor: It’s a testament to the changing Democratic map that one of the party’s toughest primary battles of 2018 involves a statewide election in Georgia. But the May primary between former Georgia House Minority Leader Stacey Abrams, who is African American, and state Sen. Stacey Evans, who is white, has already exposed fault lines within the Democratic coalition. When Evans spoke at the Netroots Nation conference last fall, protesters chanting “support black women” interrupted her remarks and handed out literature comparing Evans to Trump Education Secretary Betsy Devos; Abrams issued a lengthy defense of the protesters. Abrams has the support of civil rights legend Rep. John Lewis; EMILY’s List, which helps elect pro-choice women; and Nina Turner, president of Sanders’ political organization Our Revolution. Evans is backed by ex-Gov. Roy Barnes (the last Democrat to win statewide in Georgia) and a smattering of Democrats who think Abrams has worked too closely with Republicans during her time in the state Legislature.

Texas-07: The resistance has hit this suburban Houston district hard. Four years after Mitt Romney trounced Obama by 21 points there, Hillary Clinton won the 7th District by 1.4 percentage points. Meanwhile, nine-term Republican Rep. John Culberson has been slow to prepare himself for what is shaping up to be the toughest race of his career. The 7th is an archetype of the kind of district Democrats think Trump-era Republicans are uniquely poised to underperform in—highly educated, affluent, and very diverse. But first, Democrats need to settle on a candidate. There is Jason Westin, an MD Anderson cancer doctor. There is Laura Moser, an activist who launched an app for calling members of Congress. There is Lizzie Fletcher, a lawyer backed by EMILY’s List. And there’s the millennial, Alex Triantaphyllis, a nonprofit director who has raised more money than any of them. The question facing voters there is a heightened, and perhaps more expensive, version of the one facing Democrats in swing districts elsewhere—what exactly should a Trump-era Democrat stand for?

PA-01: The FBI is investigating allegations that longtime Philadelphia Democratic Rep. Bob Brady paid off a primary opponent to drop out of a race six years ago. Two of Brady’s consultants have already been charged in the case. But Brady has no plans to step aside, setting up yet another Philadelphia congressional primary focused on the ethics of an entrenched incumbent. (Rep. Chaka Fattah lost in a Democratic primary two years ago after being indicted on corruption charges; Fattah is now in federal prison.) Former Deputy Mayor Nina Ahmad has already loaned herself $600,000 for the race against Brady. An expensive fight against a machine politician in a critical swing state may not be the battle the Democratic establishment needs right now, but it’s the one they’ve got.